Svatopluk the Lion (Czech: Svatopluk Olomoucký; died 21 September 1109) was Duke of Bohemia from 1107 to his assassination. His rule was overshadowed by the fierce conflict around the Bohemian throne in the 12th century.

He was a member of the Přemyslid dynasty, the son of Prince Otto I of Olomouc and Euphemia, daughter of King Béla I of Hungary. As his father was the youngest son of Duke Bretislaus I of Bohemia, the Bohemian ducal dignity upon Bretislaus' death in 1055 at first had passed to the eldest son, Svatopluk's uncle Spytihněv II, and upon Spytihněv's early death in 1061 according to the patrilineal principle of agnatic seniority to Bretislaus' second son Vratislaus II.

Vratislaus, who had received the title of a Bohemian king by order of Emperor Henry IV in 1086, elevated Svatopluk's father Otto to a Prince at Olomouc in Moravia. However, when his father died the next year, young Savatopluk had to yield the inheritance claims raised by Bretislaus' third son, his uncle Conrad I, who took over the rule in the Moravian lands. 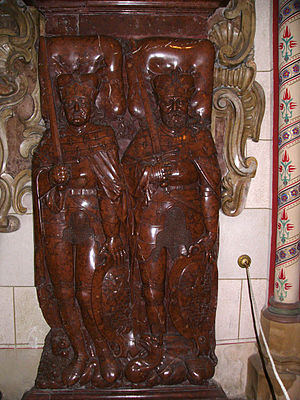 Svatopluk himself received the title Prince of Olomouc in 1091, but again had to wait to finally ascend the Bohemian throne, as according to agnatic seniority upon Duke Conrad's death after eight months of rule, he was succeeded by Bretislaus II, the son of late King Vratislaus. Nevertheless the enmity with the Moravian branch of the Přemyslid increased, moreover when Duke Bretislaus II appointed his half-brother Bořivoj II ruler of the Moravian lands and made an application to Emperor Henry IV to acknowledge Bořivoj's succession as Bohemian duke, thus precipitating a civil war with the sons of his uncle Conrad I. In 1099 he prevailed, when the Emperor had an Imperial charter wrote out, and after his death in 1100, Bořivoj took power.

Emperor Henry IV had to face the fact, that his intervention had led to a status of anarchy in Bohemia. When he himself was deposed by his son King Henry V of Germany, Svatopluk took the chance, marched against Duke Bořivoj, and with the support of Bořivoj's younger brother Vladislaus was able to oust him after two years of fighting and intriguing. Henry V summoned Svatopluk, who dared not resist, and retained him captive in order to restore his liensman Bořivoj. Soon however, he became reconciled to Svatopluk, who pledged allegiance and promised military support in the German king's campaign against King Coloman of Hungary. Savatopluk was released and could return to Bohemia. He made the king godfather of his new son, who was baptised Wenceslaus Henry (Václav Jindřich).

In 1108, Henry V intervened in Hungary on behalf of King Coloman's younger brother Duke Álmos of Nitra. Keeping his promise, Duke Svatopluk at first joined his expedition, but had to return to Bohemia, where Borivoj had made an attack with the support of the Polish king Bolesław III Wrymouth, an ally of Coloman. The German king had to abandon the seize of Bratislava (Pozsony) and King Coloman of Hungary was free to devastate the Moravian lands. Henry was furious and desired to avenge the Polish intervention which caused his Hungarian fiasco. On behalf of Bolesław's expelled brother Zbigniew he invaded Poland, again with the support of Svatopluk, who led a Bohemian army across the Sudetes into Silesia to join the German forces at the Battle of Głogów. Here Svatopluk was killed on 21 September 1109 in Henry's tent by a member of the Bohemian Vršovice noble family, whose chief, Mutina, he had decapitated for the support he had given to Bořivoj.

Bořivoj was not able to succeed Svatopluk, instead the ducal dignity passed to his younger brother Vladislaus.