Swami Shraddhanand (1856–1926), also known as Mahatma Munshi Ram, was an Indian educationist[clarification needed] and an Arya Samaj missionary who propagated the teachings of Dayananda Saraswati. This included the establishment of educational institutions, like the Gurukul Kangri University, and played a key role on the Sangathan (consolidation) and the Shuddhi (re-conversion), a Hindu reform movement in the 1920s.

He was born on 2 February 1856 in the village of Talwan in the Jalandhar District of the Punjab Province of India. He was the youngest child in the family of Lala Nanak Chand, who was a Police Inspector in the United Provinces (now Uttar Pradesh), then administered by the Honourable East India Company. His given name was Brihaspati, but later he was called Munshi Ram Vij by his father, a name that stayed with him till he took sanyas in 1917, variously as Lala Munshi Ram and Mahatma Munshi Ram.

He adopted atheism after a few incidents, such as when he was prevented from entering the temple while a noble woman was praying. He also was witness to a "compromising" situation involving a church's father with a nun,[2] the attempted rape of a young devotee by pontiffs of the Krishna cult, and the suspicious death of a little girl at the home of a Muslim lawyer. All of these events cemented his atheism. He eventually passed mukhtari exams and began studying to become a lawyer.[2]

He first met Dayanand Saraswati when Dayanand visited Bareilly to give lectures. His father was handling arrangements and security at the events, due to the attendance of some prominent personalities and British officers. Munshiram attend the lectures at his father's request. He originally went with the intent of spoiling the arrangements, then claimed to be strongly influenced by Dayanand's courage, skill, and strong personality. After completing his studies Munshiram started his practice as lawyer.[2][3] 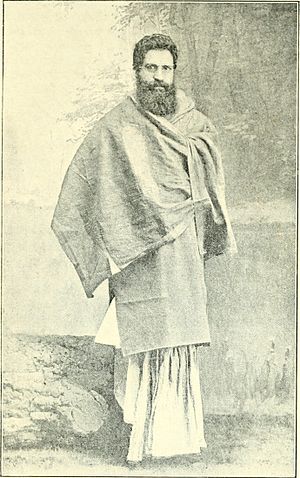 In 1892 Arya Samaj was split into two factions after a controversy over whether to make Vedic education the core curriculum at the DAV College Lahore. He left the organization and formed the Punjab Arya Samaj. The Arya Samaj was divided between the Gurukul Section and the DAV Section. Shraddhanand headed for Gurukuls. In 1897, when Lala Lekh Ram was assassinated, Shraddhanand succeeded him. He headed the 'Punjab Arya Pratinidhi Sabha', and started its monthly journal, Arya Musafir.[4] In 1902 he established a Gurukul in Kangri, India near Haridwar. This school is now recognized as Gurukul Kangri University.

Gandhi's visit: In 1915, upon his return from South Africa, M. K. Gandhi along with the pandit Madan Mohan Malviya visited the Gurukul Kangri and stayed at the campus. Till that time Swamiji was a Vanprasthi and known as Mahatma Munshi Ram. When Gandhi addressed Munshi Ram as Mahatma, appreciating the services of Mohandas Karamchand Gandhi to the nation, Mahatma Munshi Ram also called Gandhi as Mahatma in that meeting in the Gurukul. It was there, hereafter, Gandhi took the name of Mahatma Gandhi in public life.[citation needed] In 1917, Mahatma Munshi Ram took sanyas as "Swami Shradhanand Saraswati".

In 1917, Shraddhanand left Gurukul to become an active member of the Hindu reform movements and the Indian Independence movement.[3] He began working with the Congress, which he invited to hold its session at Amritsar in 1919. This was because of the Jalianwala massacre, and no one in the Congress Committee agreed to have a session at Amritsar. Shraddhanand presided over the session.

He also joined the nationwide protest against the Rowlatt Act. The same year he protested in front of a posse of Gurkha soldiers at the Clock Tower in Chandni Chowk, then was allowed to proceed.[3] In the early 1920s he emerged as an important force in the Hindu Sangathan (consolidation) movement, which was a by product of the now revitalised Hindu Maha Sabha.[5]

Swami Shradhanand was the only Hindu Sanyasi who addressed a huge gathering from the minarates of the main Jama Masjid New Delhi, for national solidarity and vedic dharma starting his speech with the recitation of ved mantras.[3]

He wrote on religious issues in both Hindi and Urdu. He published newspapers in the two languages as well. He promoted Hindi in the Devanagri script, helped the poor and promoted the education of women. By 1923, he left the social arena and plunged whole-heartedly into his earlier work of the shuddhi movement (re-conversion to Hinduism), which he turned into an important force within Hinduism.[6]

In late 1923, he became the president of Bhartiya Hindu Shuddhi Sabha, created with an aim of reconverting Muslims, specifically 'Malkana Rajputs' in the western United Province. This brought him into direct confrontation with Muslim clerics and leaders of the time.[4][7] 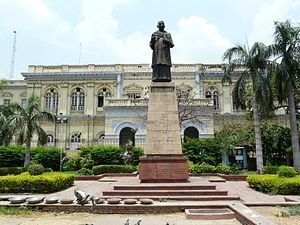 Statue of Swami Shraddhanand in front of Delhi Town Hall

On 23 December 1926 he was assassinated by a Muslim fanatic named Abdul Rashid,[8] who entered his home at Naya Bazar, Delhi, by posing as a visitor.[9][unreliable source?] Upon his death, Gandhiji moved a condolence motion at the Guwahati session of the Congress on 25 December 1926.[10] An excerpt from the speech in relevant part reads "In the language of the Gita therefore 'happy the warrior who achieves such a blessed death.' ... I cannot therefore mourn over his death. He and his are to be envied. For though Shraddhanandji is dead, he is yet living. He is living in a truer sense than when he moved in our midst in his giant body ....."I have called Abdul Rashid a brother and I repeat it. I do not even regard him as guilty of Swamiji's murder. Guilty indeed are all those who excited feelings of hatred against one another." [11]

Today, the 'Swami Shraddhanand Kaksha' at the archeological museum of the Gurukul Kangri University in Haridwar houses a photographic journey of his life.[12]

A statue of him was placed in front of Delhi Town Hall after independence, replacing a statue of Queen Victoria.[13] This location in Old Delhi is termed ghantaghar because the old clock tower stood here until the 1950s.[14]

Shraddhanad and his wife Shiwa Devi had two sons and two daughters. His wife died when Shraddhanad was only 35 years old. His granddaughter Satyavati was a prominent opponent of the British rule in India.[15]