From Infogalactic: the planetary knowledge core
Jump to: navigation, search
This article is about the five NASA satellites. For the camera system on board the 2001 Mars Odyssey orbiter, see Thermal Emission Imaging System. For other uses, see Themis (disambiguation).

The Time History of Events and Macroscale Interactions during Substorms (THEMIS) mission was originally a constellation of five NASA satellites (THEMIS A through THEMIS E) to study energy releases from Earth's magnetosphere known as substorms, magnetic phenomena that intensify auroras near Earth's poles. The name of the mission is an acronym alluding to the Titan, Themis.[1]

Three of the satellites remain in the magnetosphere, while two have been moved into orbit near the Moon. Those have been renamed ARTEMIS for Acceleration, Reconnection, Turbulence and Electrodynamics of the Moon’s Interaction with the Sun. THEMIS B became ARTEMIS P1 and THEMIS C became ARTEMIS P2.[2]

The THEMIS satellites were launched February 17, 2007 from Cape Canaveral Air Force Station Space Launch Complex 17 aboard a Delta II rocket.[1][3] Each satellite carries identical instrumentation, including a fluxgate magnetometer (FGM), an electrostatic analyzer (ESA), a solid state telescope (SST), a search-coil magnetometer (SCM) and an electric field instrument (EFI). Each has a mass of 126 kg, including 49 kg of fuel.[4]

THEMIS data can be accessed using the SPEDAS software. 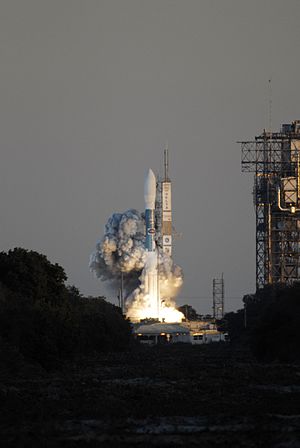 The launch of THEMIS atop the Delta II 7925 rocket, at SLC-17B, Cape Canaveral

THEMIS was originally scheduled to launch on October 19, 2006. Owing to delays caused by workmanship problems with Delta II second stages—an issue that also affected the previous mission, STEREO—the THEMIS launch was delayed to Thursday, February 15, 2007. Due to weather conditions occurring on Tuesday, February 13, fueling of the second stage was delayed, and the launch pushed back 24 hours. On February 16, the launch was scrubbed in a hold at the T-4 minute point in the countdown due to the final weather balloon reporting a red, or nogo condition for upper level winds. A 24-hour turnaround procedure was initiated, targeting a new launch window between 23:01 and 23:17 UTC on February 17.

Favorable weather conditions were observed on February 17, and the countdown proceeded smoothly. THEMIS successfully launched at 6:01 p.m. EST. The spacecraft separated from the launch vehicle approximately 73 minutes after liftoff. By 8:07 p.m. EST, mission operators at the Space Sciences Laboratory (SSL) of the University of California, Berkeley, commanded and received signals from all five spacecraft, confirming nominal separation status.

The launch service was provided by the United Launch Alliance through NASA Launch Services Program (LSP).

From February 15, 2007 until September 15, 2007 the five THEMIS satellites coasted in a string-of-pearls orbital configuration. From September 15, 2007 until December 4, 2007 the satellites were moved to more distant orbits in preparation for data collection in the magnetotail. This phase of the mission was called the "Dawn Phase" because the satellites' orbits were in apogee on the dawn side of the magnetosphere. On December 4, 2007 the first tail science phase of the mission began. In this segment of the mission scientists will collect data from the magnetotail of the Earth's magnetosphere. During this phase the satellites' orbits are in apogee inside the magnetotail. The scientists hope to observe substorms and magnetic reconnection events. During these events charged particles stored in the Earth's magnetosphere are discharged to form the aurora borealis. Tail science is performed in the winter of the northern hemisphere because the ground magnetometers that Themis scientists correlate the satellite data with have relatively longer periods of night. During the night, observations are not interrupted by charged particles from the Sun.[5]

In 2007, THEMIS "found evidence of magnetic ropes connecting Earth's upper atmosphere directly to the Sun," reconfirming the theory of solar-terrestrial electrical interaction (via "Birkeland currents" or "field-aligned currents") proposed by Kristian Birkeland circa 1908.[6][7] NASA also likened the interaction to a "30 kiloVolt battery in space," noting the "flux rope pumps 650,000 Amp current into the Arctic!"[8]

On 26 February 2008, THEMIS probes were able to determine, for the first time, the triggering event for the onset of magnetospheric substorms.[9] Two of the five probes, positioned approximately one third the distance to the Moon, measured events suggesting a magnetic reconnection event 96 seconds prior to Auroral intensification.[10] Dr. Vassilis Angelopoulos of the University of California, Los Angeles, who is the principal investigator for the THEMIS mission, claimed, "Our data show clearly and for the first time that magnetic reconnection is the trigger."[11]

On May 19, 2008 the Space Sciences Laboratory (SSL) at Berkeley announced NASA had extended the THEMIS mission to the year 2012. NASA officially approved the movement of THEMIS B and THEMIS C into lunar orbit under the mission name ARTEMIS (Acceleration, Reconnection, Turbulence and Electrodynamics of the Moon's Interaction with the Sun). 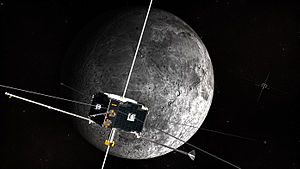 As of spring 2010, ARTEMIS P1 (THEMIS B) has performed two Lunar flybys and one Earth flyby, and was approaching insertion into a Lissajous orbit around a Lunar Lagrange point. Lunar orbit insertion was targeted for April 2011. ARTEMIS P2 (THEMIS C) completed a Lunar flyby and was on the inbound leg of the first of three deep space excursions on its way to a Lissajous orbit and was targeted for Lunar orbit in April 2011.[12]

As of November 2013, both probes are in very stable orbits, and the health of all instruments and the spacecraft remains very good.[16]

As the satellites monitor the magnetosphere from orbit, twenty ground stations in North America simultaneously monitor auroras. Ground station mission and science operations are being managed by the University of California Space Sciences Laboratory.

Swales Aerospace, now part of Orbital ATK, (Beltsville, Maryland) manufactured all five probes for this mission. Each was built-up and tested at the Beltsville facility, before being delivered to University of California, Berkeley for instrument integration. Swales was responsible for integrating the BAU, IRU, Solar Arrays, Antenna, Battery, and other components necessary for functionality. This was the second major satellite built by Swales, the first being the EO-1 spacecraft, which continues to orbit Earth. Swales was also responsible for designing and building the Electrical Ground Support Equipment (EGSE) used for monitoring the probes during all phases of pre-launch activities, including use at the launch site.

After the installation of instruments at SSL, Berkeley, pre-launch testing including thermal-vac, vibration and acoustic tests, was conducted at NASA's Jet Propulsion Laboratory in Pasadena, California.

The Fast Auroral Snapshot Explorer (FAST) mission supported THEMIS in 2008 and 2009 before being retired.[17] FAST was a Small Explorer program (SMEX) mission launched in 1996.[17]