A taʻovala is a Tongan dress, a mat wrapped around the waist, worn by men and women, at all formal occasions, much like the tie for men in the European and North American culture. The ta'ovala is also commonly seen among the Fijian Lau Islands, a region once heavily influenced by Tongan hegemony and cultural diffusion.

According to a Tongan story, a group of Tongans once arrived by boat at the Tuʻi Tonga. They had had a rough ride and their clothing, if any remained, was not respectable. They cut the sail of their boat (Polynesian sails are also mats) in pieces and wrapped them around. The king was so pleased by the sacrifice they had made to him of their expensive sail that he ordered this dress to be court dress from then on. The Tongan waist-mat probably shares a common origin or inspiration as the Samoan "valatau" or "vala" waistband often donned by orators and chiefly sons ("manaia") and daughters ("taupou") on festive occasions and rituals.

Queen Salote Tupou III ordered the taʻovala to be part of the civil servants' uniform. The use of the taʻovala for men is therefore extremely common in Tonga. For women it is somewhat less common, as they prefer a kiekie. 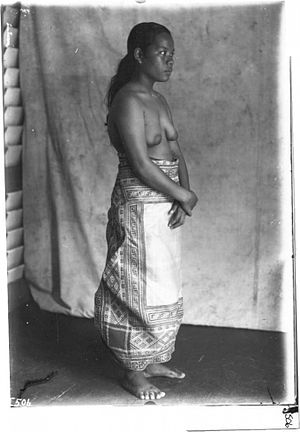 A woman named Liijabor from Likiep Island, Likiep Atoll in the Marshal Islands wears a traditional nieded or clothing mat circa 1918 when women were traditionally topless.

The normal taʻovala, for everyday neat wear, is a short mat, coming halfway up the thighs. It is tied with a rope (kafa, often made of coconut coir or of human hair of a deceased ancestor) wrapped around the waist. The mat worn on festive occasions, like a marriage, is much larger and often very nicely decorated. Likewise the taʻovala for a funeral is also a huge mat, but much coarser, not decorated. If the wearer has an inferior rank towards the deceased, the mat is old and torn. The older and more torn it is, the better. All these special mats are kept as precious heirlooms.

Taʻovala are part of the koloa, the handicraft goods made by the women. Every woman can do it. If girls do not learn it at home, it will be taught at school. More recently, however, some women specialise in the handicraft and sell their products on the market.

Taʻovala can be made from different materials, natural and introduced:

Before the advent of Western influence, the men wore a fringe skirt of native materials about 25 to 30 inches (60 to 80 cm) long. Women traditionally[1] wore two mats about a yard (metre) square each, made by weaving pandanus and hibiscus leaves together,[2] and belted around the waist.[3] Children were usually naked.[2][4] The Christian missionaries who began arriving in the late 19th century influenced the islanders' notions of modesty.