The Tahirid dynasty (Persian: طاهریان‎‎) was a dynasty, of Persian[3] dihqan[4] origin, that governed the Abbasid province of Khorasan from 821 to 873, and the city of Baghdad from 820 until 891. The dynasty was founded by Tahir ibn Husayn, a leading general in the service of the Abbasid caliph al-Ma'mun. Their capital in Khorasan was initially located at Merv, but later moved to Nishapur. The Tahirids enjoyed a high degree of autonomy in their governance of Khorasan, although they remained subject to the Abbasid caliphate and were not independent rulers.[3]

The founder of the Tahirid dynasty was Tahir ibn Husayn, a general who had played a major role in the civil war between the rival caliphs al-Amin and al-Ma'mun. He and his ancestors had previously been awarded minor governorships in eastern Khorasan for their service to the Abbasids.[3] In 821, Tahir was made governor of Khorasan, but he died soon afterwards. The caliph then appointed Tahir's son, Talha, whose governorship lasted from 822–828.[5] Tahir's other son, Abdullah, was instated as the wali of Egypt and the Arabian Peninsula, and when Talha died in 828 he was given the governorship of Khorasan. Abdullah is considered one of the greatest of the Tahirid rulers,[5] as his reign witnessed a flourishing of agriculture in his native land of Khorasan, popularity among the populations of the eastern lands of the Abbasid caliphate and extending influence due to his experience with the western parts of the caliphate.[6]

The replacement of the Pahlavi script with the Arabic script in order to write the Persian language was done by the Tahirids in 9th century Khurasan.[7][8]

Abdullah died in 845 and was succeeded by his son Tahir II. Not much is known of Tahir's rule, but the administrative dependency of Sistan was lost to rebels during his governorship. Tahirid rule began to seriously deteriorate after Tahir's son Muhammad ibn Tahir became governor, due to his carelessness with the affairs of the state and lack of experience with politics. Oppressive policies in Tabaristan, another dependency of Khorasan, resulted in the people of that province revolting and declaring their allegiance to the independent Zaydi ruler Hasan ibn Zayd in 864.[5] In Khorasan itself, Muhammad's rule continued to grow increasingly weak, and in 873 he was finally overthrown by the Saffarid dynasty, who annexed Khorasan to their own empire in eastern Persia.[9]

Besides their hold over Khorasan, the Tahirids also served as the military governors (ashab al-shurta) of Baghdad, beginning with Tahir's appointment to that position in 820. After he left for Khorasan, the governorship of Baghdad was given to a member of a collateral branch of the family, Ishaq ibn Ibrahim, who controlled the city for over twenty-five years.[10] During Ishaq's term as governor, he was responsible for implementing the Mihna (inquisition) in Baghdad.[11] His administration also witnessed the departure of the caliphs from Baghdad, as they made the recently constructed city of Samarra their new capital.[12] When Ishaq died in 849 he was succeeded first by two of his sons, and then in 851 by Tahir's grandson Muhammad ibn Abdallah.[10]

Abdallah played a major role in the events of the "Anarchy at Samarra" in the 860s, giving refuge to the caliph al-Musta'in and commanding the defense of Baghdad when it was besieged by the forces of the rival caliph al-Mu'tazz in 865. The following year, he forced al-Musta'in to abdicate and recognized al-Mu'tazz as caliph, and in exchange was allowed to retain his control over Baghdad.[13] Violent riots plagued Baghdad during the last years of Abdallah's life, and conditions in the city remained tumultuous after he died and was succeeded by his brothers, first Ubaydallah and then Sulayman.[14] Eventually order was restored in Baghdad, and the Tahirids continued to serve as governors of the city for another two decades. In 891, however, Badr al-Mu'tadidi was put in charge of the security of Baghdad in place of the Tahirids,[10] and the family soon lost their prominence within the caliphate after that.[5]

Members of the Tahirid dynasty 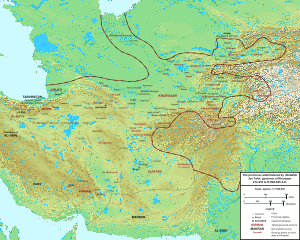