From Infogalactic: the planetary knowledge core
Jump to: navigation, search
This article is about the ancient Tiwa pueblo. For the census-designated place, see Taos Pueblo, New Mexico. For the book by Ansel Adams and Mary Hunter Austin, see Taos Pueblo (book).

Taos Pueblo (or Pueblo de Taos) is an ancient pueblo belonging to a Tiwa-speaking Native American tribe of Puebloan people. It lies about 1 mile (1.6 km) north of the modern city of Taos, New Mexico, USA. The pueblos are considered to be one of the oldest continuously inhabited communities in the United States.[3] This has been designated a UNESCO World Heritage Site.

Taos Pueblo is a member of the Eight Northern Pueblos, whose people speak two variants of the Tanoan language. The Taos community is known for being one of the most private, secretive, and conservative pueblos. A reservation of 95,000 acres (38,000 ha) is attached to the pueblo, and about 4,500 people live in this area.[4]

The pueblo was constructed in a setting backed by the Taos Mountains of the Sangre de Cristo Range. The settlement was built on either side of Rio Pueblo de Taos, also called Rio Pueblo and Red Willow Creek, a small stream that flows through the middle of the pueblo compound. Its headwaters come from the nearby mountains.[citation needed]

Taos Pueblo's most prominent architectural feature is a multi-storied residential complex of reddish-brown adobe, built on either side of the Rio Pueblo. The Pueblo's website states it was probably built between 1000 and 1450.[4]

The pueblo was designated a National Historic Landmark on October 9, 1960. In 1992 it was designated as a UNESCO Heritage Site. As of 2006, about 150 people live in the historic complex full-time.[4]

In the Tanoan language of Northern Tiwa, the pueblo is referred to as "the village" in either tə̂otho "in the village" (tə̂o- "village" + -tho "in") or tə̂obo "to/toward the village" (tə̂o- "village" + -bo "to, toward"). The proper name of the pueblo is ȉałopháymųp’ȍhə́othə̀olbo "at red willow canyon mouth" (or ȉałopháybo "at the red willows" for short).[5] This name is more commonly used in ceremonial contexts and is less common in everyday speech.

The name Taos in English was borrowed from Spanish Taos. Spanish Taos is probably a borrowing of Taos tə̂o- "village" which was heard as tao to which the plural -s was added although in the modern language Taos is no longer a plural noun. The idea that the Spanish Taos is from tao, "cross of the order of San Juan de los Caballeros" (from Greek tau), is unlikely.[6]

Most archeologists believe that the Taos Indians, along with other Pueblo Indians, settled along the Rio Grande after migrating south from the Four Corners region.[7] The dwellings of that region were inhabited by the Ancestral Puebloans. A long drought in the area in the late 13th century may have caused them to move to the Rio Grande, where the water supply was more dependable.

Throughout its early years, Taos Pueblo was a central point of trade between the native populations along the Rio Grande and their Plains Tribes neighbors to the northeast. Taos Pueblo hosted a trade fair each fall after the agricultural harvest.[8]

The first Spanish visitors to Taos Pueblo arrived in 1540; they were members of the Francisco Vásquez de Coronado expedition, which stopped at many of New Mexico’s pueblos in search of the rumored Seven Cities of Gold. Around 1620, Spanish Jesuits oversaw construction of the first Catholic Church in the pueblo, the mission of San Geronimo de Taos. Reports from the period indicate that the native people of Taos resisted the building of the church and imposition of the Catholic religion. Throughout the 1600s, cultural tensions grew between the native populations of the Southwest and the increasing Spanish colonial presence. Taos Pueblo was no exception. By 1660, the native people killed the resident priest and destroyed the church. Several years after it was rebuilt, the Pueblo Revolt of 1680 began; the Taos destroyed the church and killed two resident priests.[8]

By the turn of the 18th century, San Geronimo de Taos was under construction for a third time. Spanish/Taos relations within the pueblo became amicable for a brief period as both groups found a common enemy in invading Ute and Comanche tribes. Resistance to Catholicism and Spanish culture was still strong. Even so, Spanish religious ideals and agricultural practices subtly worked their way into the Taos community, largely starting during this time of increased cooperation between the two cultural groups.[8]

New Mexico formally became a territory of the United States in 1847 with the signing of the Treaty of Guadalupe Hidalgo after the US defeat of Mexico, but a revolt broke out in Taos Pueblo. Mexican Pablo Montoya and Tomasito, a leader at Taos Pueblo, led a force of Mexicans and Taos who did not want to become a part of the United States. They killed Governor Charles Bent and others and marched on Santa Fe. The revolt was suppressed after the rebels took refuge in San Geronimo Mission Church. The American troops bombarded the church, killing or capturing the insurrectionists and destroying the physical structure. Around 1850, a new mission church was constructed near the west gate of the pueblo wall. The ruins of the original church and its 1850s replacement are both still visible inside the pueblo wall today.[8] Father Anton Docher first served as a priest in Taos before his years in Isleta, where he became known as "The Padre of Isleta".[9]

In 1924-25 the Taos Pueblo culture was studied by German psychiatrist Carl Jung, who visited the Pueblo led by Ochwiay Biano. He was very interested in indigenous societies as he believed they were more closely in touch with archetypes.[citation needed] 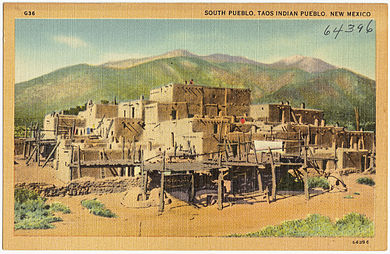 The Pueblo's 48,000 acres (19,000 ha) of mountain land was taken by President Theodore Roosevelt and designated as the Carson National Forest early in the 20th century. It was finally returned in 1970 by the United States when President Nixon signed Public Law 91-550.[10] An additional 764 acres (309 ha) south of the ridge between Simpson Peak and Old Mike Peak and west of Blue Lake were transferred back to the Pueblo in 1996.[11]

Blue Lake, which the people of the Pueblo consider sacred, was included in this return of Taos land. The Pueblo notably involved non-native people in lobbying the federal government for the return of Blue Lake, as they argued that their unrestricted access to the lake and the surrounding region was necessary to ensure their religious freedom.[12] The Pueblo's web site names the acquisition of the sacred Blue Lake as the most important event in its history due to the spiritual belief that the Taos people originated from the lake.[13] 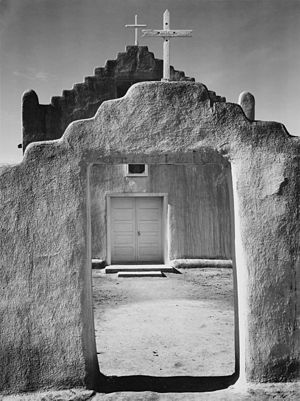 At the time of the Spaniards' initial contact, Hernando de Alvarado described the pueblo as having adobe houses built very close together and stacked five or six stories high. The homes became narrower as they rose, with the roofs of each level providing the floors and terraces for those above.[8]

The buildings at Taos originally had few windows and no standard doorways. Instead, access to rooms was through square holes in the roof that the people reached by climbing long, wooden ladders. Cedar logs (or vigas) supported roofs that had layers of branches, grass, mud, and plaster covering them. The architecture and the building materials were well suited for the rigors of the environment and the needs of the people in the Taos Valley.[8]

The first Spanish-influenced architecture appeared in Taos Pueblo after Fray Francisco de Zamora came there in 1598 to establish a mission, under orders from Spanish Governor, Don Juan de Oñate.[8] 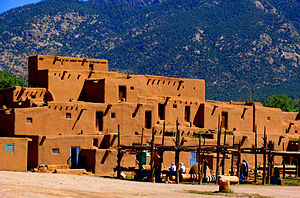 The north-side Pueblo is said to be one of the most photographed and painted buildings in North America.[14] It is the largest multistoried Pueblo structure still existing. It is made of adobe walls that are often several feet thick. Its primary purpose was for defense.[7] Up to as late as 1900, access to the rooms on lower floors was by ladders on the outside to the roof, and then down an inside ladder. In case of an attack, outside ladders could easily be pulled up.

The homes in this structure usually consist of two rooms, one of which is for general living and sleeping, and the second of which is for cooking, eating, and storage. Each home is self-contained; there are no passageways between the houses. Taos Indians made little use of furniture in the past, but today they have tables, chairs, and beds. In the pueblo, electricity, running water, and indoor plumbing are prohibited.[7] 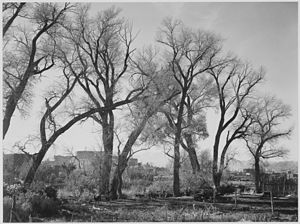 Two spiritual practices are represented in the Pueblo: the original indigenous spiritual and religious tradition[4] and Roman Catholicism. The majority of Taos Indians practice their still-vital, ancient indigenous religion.[7] Most (90%) members of the Taos Pueblo community are baptized as Roman Catholics.[4] Saint Jerome, or San Geronimo, is the patron saint of the pueblo.[15]

This article incorporates public domain material from websites or documents of the National Park Service.