Tar (Persian: تار‎‎) is a Persian[1][2][3][4] long-necked, waisted instrument, shared by many cultures and countries like Iran, Armenia, Georgia, Republic of Azerbaijan, and other areas near the Caucasus region.[1][2][5] The word tār (تار) means "string" in Persian, though it might have the same meaning in languages influenced by Persian. This has led some Iranian experts to hold that the Tar must be common among all the Iranian people as well as the territories that are boldly named as "Iranian Cultural Continuum" by the Encyclopædia Iranica.[6]

Tar is one of the most important musical instruments in Iran and the Caucasus. The formation, compilation, edition, and inheritance of the most authentic and most comprehensive versions of radif are all worked on tar. The general trends of Persian classical music have been deeply influenced by tar players. In 2012 art of Azerbaijani craftsmanship and performance art of the tar was added to the Representative List of the Intangible Cultural Heritage of Humanity.[8]

The tar appeared in its present form in the middle of the eighteenth century in Persia. The body is a double-bowl shape carved from mulberry wood, with a thin membrane of stretched lamb-skin covering the top.

The fingerboard has twenty-five to twenty-eight adjustable gut frets, and there are three double courses of strings. Its range is about two and one-half octaves, and it is played with a small brass plectrum.

The long and narrow neck has a flat fingerboard running level to the membrane and ends in an elaborate pegbox with six wooden tuning pegs of different dimensions, adding to the decorative effect. It has three courses of double "singing" strings (each pair tuned in unison: the first two courses in plain steel, the third in wound copper), that are tuned in fourths (C, G, C) plus one "flying" bass string (wound in copper and tuned in G, an octave lower than the singing middle course) that runs outside the fingerboard and passes over an extension of the nut. Every String has its own tuning peg and are tuned independently. The Persian tar used to have five strings. The sixth string was added to the tar by Darvish Khan. This string is today's fifth string of the Iranian tar. 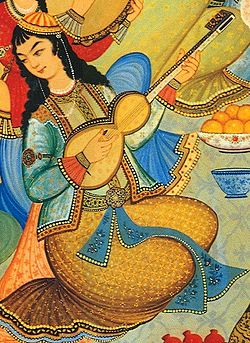 Woman playing the tar in a Persian miniature from the Hasht Behesht Palace in Isfahan, Persia (Iran)

The melodies performed on tar were considered useful for headache, insomnia and melancholy, as well as for eliminating nervous and muscle spasms. Listening to this instrument was believed to induce a quiet and philosophical mood, compelling the listener to reflect upon life. Its solemn melodies were thought to cause a person to relax and fall asleep.

Use in contemporary music

The tar features prominently in Jeff Wayne's Musical Version of The War of the Worlds, in the section "Horsell Common and the Heat Ray". George Fenton played it on the original album, and Gaetan Schurrer can be seen[9] playing one on the DVD of the 2006 production.

The "Azerbaijani tar" or "11 string tar" is an instrument in a slightly different shape from the Persian Tar and was developed from the Persian tar around 1870 by Sadigjan. It has a slightly different build and has more strings. The Caucasus tar has further one extra bass-string on the side, on a raised nut, and usually 2 double resonance strings via small metal nuts halfway the neck. All these strings are running next to the main strings over the bridge and are fixed to a string-holder and the edge of the body.[10] Overall the Caucasus tar has 11 strings and 17 tones.