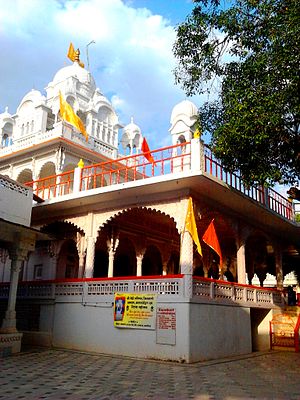 The Taran Panth or Taranapanthi sect of Jainism was founded by Taran Svami in Bundelkhand in 1505 CE.[2] Taran Svami is also referred to as Taran Taran, the one who can help the swimmers to the other side, i.e. towards nirvana. The Taranpanthis traditionally do not have idols in their shrines.

The birth name of Taran Svami is not known. He was born in Pushpavati (now Bilahari near Katni) in the Paravar Jain community. His father was a government official. His uncle lived in Sironj, where a Bhattaraka institution of Balatkara Gana was present. When he was eight years old, while accompanying his father to Sironj, he came across Bhattaraka Shrutakirti. The Bhattaraka persuaded the boy to start attending the lectures where Samayasara was discussed. Later Taran Svami organized his group and meditated and preached at Semarkheri (near Sironj M.P.) he took Diksha in Semarkheri and made their Sadhna in Sukha Ji (Damoh District MP). His chief disciples were Ruiaraman and Kamanavati. His samādhi is at Nisaiji (Malhargarh) in Dist Ashok Nagar M.P.. A mystical account of his life, perhaps an autobiography, is given in Chadmastha Vani.

The language in his fourteen books is a unique blend of Prakrit, Sanskrit and Apabhramsha. Note that at this time Jains had not been using Prakrit for several centuries. His language was perhaps influenced by his reading of the books of Acharya Kundakunda.

Commentaries on six of the main texts composed by Taran Svami were written by Brahmacari Shitala Prasad in the 1930s. Commentaries on other texts have also been done recently. Osho (Rajnish), who was born into a Taranpanthi family, has included Shunya Svabhava and Siddhi Svabhava as among the books that influenced him most.[3]

Taranpanthi shrines are called Chaityalaya (or sometimes Nisai/Nasia). At the altar (vimana) they have a book instead of an idol. The Taranpanthis were originally from six communities. TaranPanthis worship to nirakar Atma (soul) in their temple the follower pray to fourteen granths wrote by Taran Swami that are situated on the Vedi Ji.

Taran svami had nine monks and thirty-six nuns under him. The fourteen books he wrote are divided into five categories: