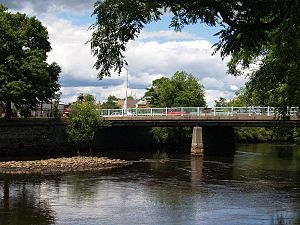 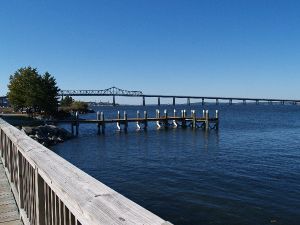 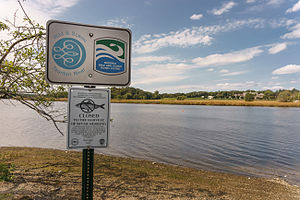 The Taunton River is a Wild and Scenic River

The Taunton River (historically also called the "Taunton Great River"), is a river in southeastern Massachusetts in the United States. It arises from the confluence of the Town River and Matfield River, in the town of Bridgewater. From there it meanders through the towns of Halifax, Middleborough and Raynham, through the city of Taunton for which it is named, the towns of Berkley, Dighton, Somerset, and the Assonet section of Freetown, to Fall River where it joins Mount Hope Bay, an arm of Narragansett Bay.

The total length of the river is 37.0 miles (59.5 km) from the junction of the Town and Matfield Rivers in Bridgewater to the mouth of the Quequechan River in Fall River.[1] It has a watershed of 562 square miles (1,456 km²). The river's watershed includes the Hockomock Swamp, the largest freshwater wetland in the state. The Taunton River is one of the flattest rivers in New England, dropping only about twenty feet (6 m) in elevation over its length.[2] The river is tidal as far north as Taunton.

The river is home to much biodiversity, including some animals found nowhere else in the state. Over 154 bird species (including bald eagles) have been documented along the Taunton River, primarily during breeding season. The watershed supports 28 species of reptiles and amphibians, and 29 species of fish, including native brook trout and Atlantic sturgeon, which can be found in the lower part of the watershed.[2] The Mystic Valley Amphipod, which is native only to eastern New England, has been found in various wetlands throughout the watershed. All along the river, otters can be found on the shoreline, and even harbor seals have been sighted in the watershed, even in some of the smaller tributaries (such as the Nemasket River).[3] The watershed also is home to 7 species of freshwater mussels, and the largest herring run in New England.[2] In 2005, a young harp seal was found in the Nemasket River (a tributary of the Taunton).[4] In early summer 2014, a young male Beluga whale was sighted in the Taunton River,[5] and in late August 2014, a basking shark was also spotted in the Taunton.[6]

Over 360 plant species were sampled from the floodplain wetlands and the immediate river corridors, and various vegetative communities can be found along the river. These include Atlantic White Cedar Swamps, Forested Bogs, and Coastal Plain Pondshores, among many others.[2]

Since the development of industry beginning with the iron works of the mid-17th century, the Taunton River has played an important role in the economy of the Greater Taunton Area. The shipbuilding industry was very active in the Taunton area during the 19th century.[7]

Battleship Cove, the world's largest museum of warships, is located on the Fall River side of the river at its confluence with Mount Hope Bay, beneath the Braga Bridge.

After over five years of study for possible inclusion in the National Wild and Scenic River System, such designation was obtained in April 2009.[9]