From Infogalactic: the planetary knowledge core
Jump to: navigation, search
For other uses, see Taxidermy (disambiguation). 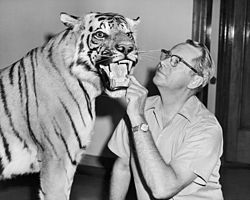 Taxidermy (from the Greek for arrangement of skin[1]) is the art of preparing, stuffing, and mounting the skins of animals (especially vertebrates) for display (e.g., as hunting trophies or museum display) or for other sources of study (like species identification) or simply the preservation of a beloved pet. Taxidermy can be done on all vertebrate species of animals, including mammals, birds, fish, reptiles, and amphibians. 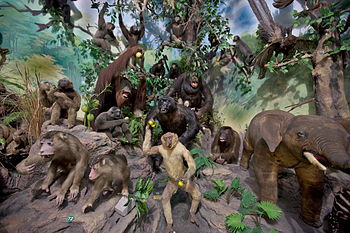 A person who practices taxidermy is called a taxidermist. Taxidermists may practice professionally for museums or as businesses catering to hunters and fishermen, or as amateurs, such as hobbyists, hunters, and fishermen. A taxidermist is aided by familiarity with anatomy, sculpture, painting, and tanning. 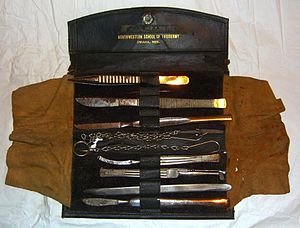 Preserving animal skins has been practiced for a long time. Embalmed animals have been found with Egyptian mummies.

Although embalming incorporates the use of lifelike poses, it is not considered taxidermy. In the Middle Ages, crude examples of taxidermy were displayed by astrologers and apothecaries. The earliest methods of preservation of birds for natural history cabinets were published in 1748 by Reaumur in France. Techniques for mounting were described in 1752 by M. B. Stollas. There were several pioneers of taxidermy in France, Germany, Denmark and England around this time. For a while, clay was used to shape some of the soft parts, but this made specimens heavy.

By the 18th century, almost every town had a tannery business. In the 19th century, hunters began bringing their trophies to upholstery shops, where the upholsterers would actually sew up the animal skins and stuff them with rags and cotton. The term "stuffing" or a "stuffed animal" evolved from this crude form of taxidermy. Professional taxidermists prefer the term "mounting" to "stuffing". More sophisticated cotton-wrapped wire bodies supporting sewn-on cured skins soon followed. In France, Louis Dufresne, taxidermist at the Muséum national d'Histoire naturelle from 1793, popularized arsenical soap in an article in "Nouveau dictionnaire d'histoire naturelle'" (1803–1804). This technique enabled the museum to build the greatest collection of birds in the world. 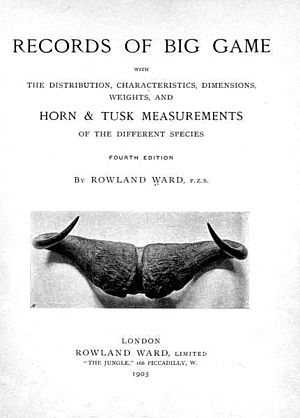 Dufresne's methods spread to England in the early 19th century, where updated and non-toxic methods of preservation were developed by some of the leading naturalists of the day, including Rowland Ward and Montague Brown. Ward established one of the earliest taxidermy firms, Rowland Ward Ltd. of Picadilly. However, the art of taxidermy remained relatively undeveloped, and the specimens that were created, remained stiff and unconvincing.

The golden age of taxidermy was during the Victorian era, when mounted animals became a popular part of interior design and decor.[2] The father of modern taxidermy is considered to be John Hancock, an English ornithologist. An avid collector of birds, which he would shoot himself, he began modelling them with clay and casting in plaster.

For the Great Exhibition of 1851 in London, he mounted a series of stuffed birds as an exhibit. They generated much interest among the public and scientists alike who considered them as superior to earlier models and were regarded as the first lifelike and artistic specimens on display.[3] A judge remarked that Hancock's exhibit "...will go far towards raising the art of taxidermy to a level with other arts which have hitherto held higher pretensions".[4]

In the late 19th century a style known as anthropomorphic taxidermy became popular. A 'Victorian whimsy', mounted animals were dressed as people or displayed as if engaged in human activities. An early example of this genre was displayed by Herman Ploucquet, from Stuttgart, Germany, at the Great Exhibition in London.[6]

The best-known practitioner in this genre was the English taxidermist Walter Potter, whose most famous work was The Death and Burial of Cock Robin. Among his other scenes were "a rat's den being raided by the local police rats ... [a] village school ... featuring 48 little rabbits busy writing on tiny slates, while the Kittens' Tea Party displayed feline etiquette and a game of croquet."[7] Apart from the simulations of human situations, he had also added examples of bizarrely deformed animals such as two-headed lambs and four-legged chickens. Potter's museum was so popular that an extension was built to the platform at Bramber railway station.[8] 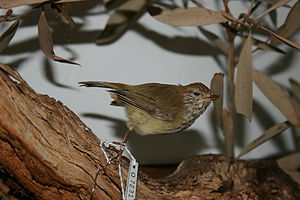 A striated thornbill on display in a 'realistic' setting

In the early 20th century, taxidermy was taken forward under the leadership of artists such as Carl Akeley, James L. Clark, William T. Hornaday, Coleman Jonas, Fredrick and William Kaempfer, and Leon Pray. These and other taxidermists developed anatomically accurate figures which incorporated every detail in artistically interesting poses, with mounts in realistic settings and poses that were considered more appropriate for the species. This was quite a change from the caricatures popularly offered as hunting trophies.

Museums use taxidermy as a method to preserve a record of specimens of extinct and threatened species.[9]

The methods taxidermists practice have been improved over the last century, heightening taxidermic quality and lowering toxicity. The animal is first skinned in a process similar to removing the skin from a chicken prior to cooking. This can be accomplished without opening the body cavity, so the taxidermist usually does not see internal organs or blood. Depending on the type of skin, preserving chemicals are applied or the skin is tanned. It is then either mounted on a mannequin made from wood, wool and wire, or a polyurethane form. Clay is used to install glass eyes. Forms and eyes are commercially available from a number of suppliers. If not, taxidermists carve or cast their own forms.

Taxidermists seek to continually maintain their skills to ensure attractive, lifelike results. Many taxidermists in the US use bears, though some use creatures such as snakes, birds and fish. Although mounting an animal has long been considered an art form, often involving months of work, not all modern taxidermists trap or hunt for prize specimens.[10]

Taxidermy specimens can be saved for later use by freezing. The taxidermist then removes the skin, to be tanned and treated at a later date. Numerous measurements are then taken of the remaining body. A traditional method that remains popular today involves retaining the original skull and leg bones of a specimen and using these as the basis to create a mannequin made primarily from wood wool (previously tow or hemp wool was used) and galvanised wire. Another method is to mould the carcass in plaster, and then make a copy of the animal using one of several methods. A final mould is then made of polyester resin and glass cloth; from which a polyurethane form is made for final production. The carcass is then removed and the mould is used to produce a cast of the animal called a 'form'. Forms can also be made by sculpting the animal first in clay. Many companies produce stock forms in various sizes. Glass eyes are then usually added to the display, and in some cases, artificial teeth, jaws, tongue, or for some birds, artificial beaks and legs can be used.

An increasingly popular trend is to freeze dry the animal. This can be done with reptiles, birds, and small mammals such as cats, large mice and some types of dogs. Freeze drying is expensive and time consuming. The equipment is costly and requires much upkeep. Large specimens can be required to spend as long as six months in the freeze dryer, although it is the preferred technique for pets. Freeze dried animals, though, may later be susceptible to being eaten by carpet beetles.

Some taxidermy specimens do not involve a carcass at all, particularly in the case of sporting fish, such as trout and bass, for which the practice of catch and release is becoming increasingly prevalent. Instead, detailed photos and measurements are taken of the animal, and then a taxidermist creates a resin or fibreglass sculpture of the animal that can be mounted and displayed as a specimen. The actual animal is released. 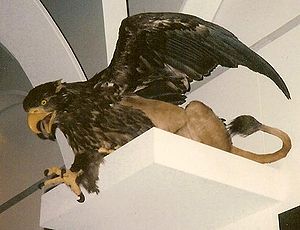 A stuffed griffin, in the Zoological Museum, Copenhagen

Many taxidermists[who?] do not consider rogue taxidermy "true" taxidermy. The term "rogue taxidermy" was introduced by the Minneapolis, Minnesota-based group, The Minnesota Association of Rogue Taxidermists (MART) in October 2004. It was first coined by MART founders Sarina Brewer, Scott Bibus, and Robert Marbury. The term first appeared in print in a New York Times article about the group's debut exhibition on January 3, 2005.[12]