Tech Mahindra Limited is an Indian multinational provider of information technology (IT), networking technology solutions and Business Process Outsourcing (BPO) to the telecommunications industry. It is a specialist in digital transformation, consulting and business re-engineering solutions. Anand Mahindra is the founder of Tech Mahindra which is headquartered at Pune, India.

Part of the Mahindra Group, Tech Mahindra is a USD 3.68 billion company with 105,000+ professionals across 51 countries.[3] It provides services to 788 global customers including Fortune 500 companies. It is also one of the Fab 50 companies in Asia, a list compiled by Forbes.[4] Tech Mahindra was ranked #5 in India's software services (IT) firms and overall #111 in Fortune India 500 list for 2012.[5] Tech Mahindra, on 25 June 2013, announced the completion of a merger with Mahindra Satyam.[6]

After the Satyam scandal of 2008-09 Tech Mahindra bid for Satyam Computer Services, and emerged as a top bidder with an offer of Rs 58.90 a share for a 31 per cent stake in the company, beating a strong rival Larsen & Toubro.[9] After evaluating the bids, the government-appointed board of Satyam Computer announced on 13 April 2009: "its Board of Directors has selected Venturbay Consultants Private Limited, a subsidiary controlled by Tech Mahindra Limited as the highest bidder to acquire a controlling stake in the Company, subject to the approval of the Hon'ble Company Law Board." Through a subsidiary, it has emerged victorious in Satyam sell-off, a company probably two times its size in number of people. This was one of the largest merger deals in India's tech industry. 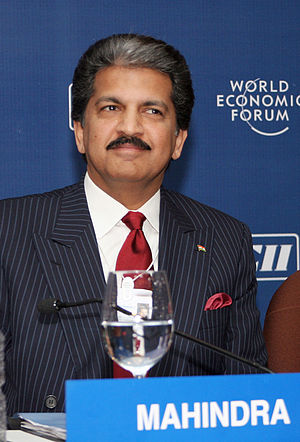 Tech Mahindra announced its merger with Mahindra Satyam on March 21, 2012, after the board of two companies gave the approval,to build a 2.5-billion $ IT Company in India.[10][11][12] The two firms had received the go-ahead for merger from the Bombay Stock Exchange and the National Stock Exchange.[13] On June 11, 2013, Andhra Pradesh High Court gave its approval for the merger of Mahindra Satyam with Tech Mahindra,after Bombay high court already gave its approval.[14][15][16][17] Vineet Nayyar said that technical approvals from the Registrar of Companies(RoC) in Andhra Pradesh and Maharashtra are required which will be done in two to four weeks,and within 8 weeks,new merged entity will be in place,a new organisation chart would also come into force led by Anand Mahindra as Chairman, Vineet Nayyar as Vice Chairman and C. P. Gurnani as the CEO and Managing Director.[18][19][20] On June 25, 2013,Tech Mahindra announced completion of Mahindra Satyam's merger with itself to create nation's fifth largest software services company with a turnover of USD 2.7 billion.[21][22] Tech Mahindra got the approval from the registrar of companies for the merger late in the night at 11:45 pm on June 24, 2013. July 5, 2013 has been determined as record date on which the Satyam Computer Services ('Mahindra Satyam') shares will be swapped for Tech Mahindra shares under the approved scheme, which was approved by both the boards.[23] Mahindra Satyam (Satyam Computer Services), was suspended from trading with effect from July 4, 2013, following its merger with Tech Mahindra .[24] Tech Mahindra completed share swap and allocated its shares to the shareholders of Satyam Computer Services on July 12, 2013.[25] The stock exchanges have accorded their approval for trading the new shares effective July 12, 2013. Tech Mahindra posted net profit of Rs 686 crore for the first quarter ended June 30, 2013, up 27% compared to the corresponding quarter last year.[26][27][28]