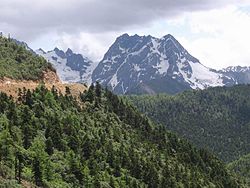 Mixed forests are a temperate and humid biome. The typical structure of these forests includes four layers. The uppermost layer is the canopy composed of tall mature trees ranging from 30 to 61 m (100 to 200 ft) high. Below the canopy is the three-layered, shade-tolerant understory that is roughly 9 to 15 m (30 to 50 ft) shorter than the canopy. The top layer of the understory is the sub-canopy composed of smaller mature trees, saplings, and suppressed juvenile canopy layer trees awaiting an opening in the canopy. Below the sub-canopy is the shrub layer, composed of low growing woody plants. Typically the lowest growing (and most diverse) layer is the ground cover or herbaceous layer.

In the Northern hemisphere, characteristic dominant broadleaf trees in this biome include oaks (Quercus spp.), beeches (Fagus spp.), maples (Acer spp.), and birches (Betula spp.).[1] The term "mixed forest" comes from the inclusion of coniferous trees as a canopy component of these forests. Typical coniferous trees include: Pines (Pinus spp.), firs (Abies spp.), and spruces (Picea spp.). In some areas of this biome the conifers may be a more important canopy species than the broadleaf species. In the Southern hemisphere, endemic genera such as Nothofagus and Eucalyptus occupy this biome.

Temperate broadleaf and mixed forests occur in areas with distinct warm and cool season, which give it a moderate annual average temperature—3 to 15.6 °C (37 to 60 °F). These forests occur in relatively warm and rainy climates, sometimes also with a distinct dry season. A dry season occurs in the winter in East Asia and in summer on the wet fringe of the Mediterranean climate zones. Other areas have a fairly even distribution of rainfall; annual rainfall is typically over 600 mm (24 in) and often over 1,500 mm (59 in). Temperatures are typically moderate except in parts of Asia such as Ussuriland where temperate forests can occur despite very harsh conditions with very cold winters.