The Temple of Heaven, literally the Altar of Heaven (simplified Chinese: 天坛; traditional Chinese: 天壇; pinyin: Tiāntán; Manchu: Abkai mukdehun), is a medieval complex of religious buildings situated in the southeastern part of central Beijing. The complex was visited by the Emperors of the Ming and Qing dynasties for annual ceremonies of prayer to Heaven for good harvest. It has been regarded as a Daoist temple,[1] although Chinese heaven worship, especially by the reigning monarch of the day, predates Daoism. 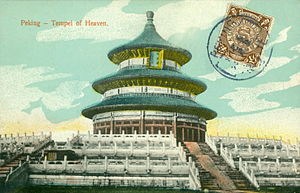 Temple of Heaven on a 1898 postcard

The temple complex was constructed from 1406 to 1420 during the reign of the Yongle Emperor, who was also responsible for the construction of the Forbidden City in Beijing. The complex was extended and renamed Temple of Heaven during the reign of the Jiajing Emperor in the 16th century. Jiajing also built three other prominent temples in Beijing, the Temple of Sun (日壇) in the east, the Temple of Earth (地壇) in the north, and the Temple of Moon (月壇) in the west. The Temple of Heaven was renovated in the 18th century under the Qianlong Emperor. By then, the state budget was insufficient, so this was the last large-scale renovation of the temple complex in imperial times.

In 1914, Yuan Shikai, then President of the Republic of China, performed a Ming prayer ceremony at the temple, as part of an effort to have himself declared Emperor of China. In 1918 the temple was turned into a park and for the first time open to the public.

The Temple of Heaven was inscribed as a UNESCO World Heritage Site in 1998 and was described as "a masterpiece of architecture and landscape design which simply and graphically illustrates a cosmogony of great importance for the evolution of one of the world’s great civilizations..." as the "symbolic layout and design of the Temple of Heaven had a profound influence on architecture and planning in the Far East over many centuries."

Panorama with the Hall of Prayer for Good Harvests in the center, viewed from the south

The Temple grounds cover 2.73 km² of parkland and comprises three main groups of constructions, all built according to strict philosophical requirements:

Panorama from the opposite view of the Imperial Vault of Heaven

Panorama of the three main halls

In ancient China, the Emperor of China was regarded as the Son of Heaven, who administered earthly matters on behalf of, and representing, heavenly authority. To be seen to be showing respect to the source of his authority, in the form of sacrifices to heaven, was extremely important. The temple was built for these ceremonies, mostly comprising prayers for good harvests.

Twice a year the Emperor and all his retinue would move from the Forbidden City through Beijing to encamp within the complex, wearing special robes and abstaining from eating meat. No ordinary Chinese was allowed to view this procession or the following ceremony. In the temple complex the Emperor would personally pray to Heaven for good harvests. The highpoint of the ceremony at the winter solstice was performed by the Emperor on the Earthly Mount. The ceremony had to be perfectly completed; it was widely held that the smallest of mistakes would constitute a bad omen for the whole nation in the coming year. 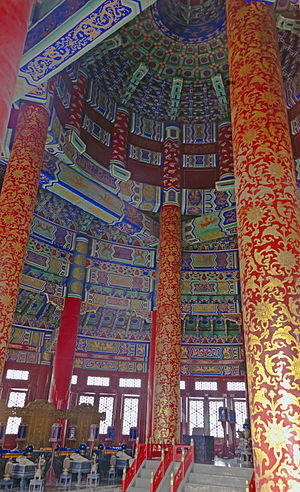 Inside the Hall of Prayer for Good Harvests.

Earth was represented by a square and Heaven by a circle; several features of the temple complex symbolize the connection of Heaven and Earth, of circle and square. The whole temple complex is surrounded by two cordons of walls; the outer wall has a taller, semi-circular northern end, representing Heaven, and a shorter, rectangular southern end, representing the Earth. Both the Hall of Prayer for Good Harvests and the Circular Mound Altar are round, each standing on a square yard, again representing Heaven and Earth.

The number nine represents the Emperor and is evident in the design of the Circular Mound Altar: a single round marmor plate is surrounded by a ring of nine plates, then a ring of 18 plates, and so on for a total of nine surrounding rings, the outermost having 9×9 plates.

All the buildings within the Temple have special dark blue roof tiles, representing the Heaven.

The Seven-Star Stone Group, east of the Hall of Prayer for Good Harvest, represents the seven peaks of Taishan Mountain, a place of Heaven worship in classical China.

Mauricio Percara, a journalist based in Beijing, explained in his article "Temple of Heaven: meeting the Paradadise (El Templo del Cielo: un encuentro con el Paraíso)" that the symbology is quite descriptive and there are four main pillars which represent the seasons of the year, twelve inner pillars symbolize the months and twelve outside pillars symbolize the twelve doce pilares exteriores aluden a las 12 wakefulness of the day. And a golden dragon, into the hall, brings honor to the emperor.

The surrounding park is quite extensive, with the entire complex totaling 267 hectares (660 acres). Some of it consists of playgrounds, exercise and game areas. These facilities are well used by adults, as well as by parents and grandparents bringing children to play. Some of the open spaces and side buildings are often used, particularly in the morning, for choral shows, ethnic dances, and other presentations.

All four of the park's gates are accessible by public transportation.