Temuco is a city and commune, capital of the Cautín Province and of the Araucanía Region in southern Chile. The city is located 670 kilometres (416 miles) south of Santiago at the heart of the modern Araucanía Region and historic Araucanía—the land of the Mapuche who resisted Spanish conquest.

Temuco was founded by Chilean military in Mapuche territory 1881 during the occupation of Araucanía and grew quickly into one of Chile's main cities. Temuco grew as a consequence of the livestock, wheat and forestry boom that its surrounding countryside experienced between 1890 up to the 1940s. Nobel Poets Gabriela Mistral and Pablo Neruda both lived in Temuco for some time.

Temuco's central place in Araucanía with easy access to the Andean valleys and the coast makes it a hub for agricultural, livestock and forestry operations as well as communication and trade centre for the numerous small towns of Araucanía.

The name comes from the Mapudungun language, meaning "temu water"; "temu" (Blepharocalyx cruckshankii) is a tree used by Mapuche for medicinal purposes.

The city was founded on February 24, 1881 as a fort during the Occupation of the Araucanía. Manuel Recabarren, in charge of the project, named the place Fuerte (Fort) Recabarren.

Formed as a military encampment, Temuco had in its origins the attributes of a camp, and a year after its founding, the first major streets started to form in the downtown area.

On April 15, 1888, the first city officers were elected including the first mayor José del Rosario Muñoz. The city grew quickly; a census in 1895 indicated a population of 7,708 people, and when Cautin was declared a province, Temuco became its capital, with its population by that time of 16,037 people.

Chilean poetry has deep roots in Temuco. Nobel Poets Gabriela Mistral and Pablo Neruda (Neftali Reyes) both lived in Temuco. Mistral was the principal of an all-girls school where Neruda would visit her and show her his first verses when he was around 15 years old.

In 2010 Temuco was affected by the earthquake on February 27 centered 400 km (250 mi) to the north. It was one of the most affected regions of Chile besides Santiago, Concepcion, Valparaíso and others.[clarification needed] The earthquake registered 8.8 Mw on the moment magnitude scale. Though landlocked Temuco avoided the tsunamis the earthquake caused, many very strong aftershocks throughout the country followed, including a 7.1 MW earthquake 70 km (43 mi) northwest of the city.[4] Temuco continues to rebuild from the disaster, and the alpine region hopes to be awarded the 2022 Winter Olympics, though the host city is Santiago or the alternative site, Chillán, with plans for an Olympic ceremony stadium under way.[citation needed] 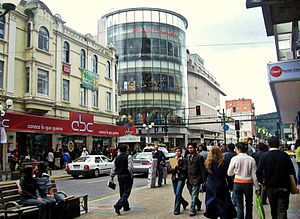 The locals are called temuquences. Most inhabitants are of different origins. Temuco has a high percentage being of Basque ancestry other than Castilian and other Spanish nationalities. Thus, one can find indigenous, mainly Mapuche, who account for 13% of the population of Temuco, which makes it the largest city of Chile with an indigenous presence.[citation needed] There is also a large percentage of temuquences that are directly descended from European immigrants, many of the early arrivals during 1883–1901, after the pacification of Araucanía. The main sources are from Switzerland, Spain, France, Germany, Italy and the United Kingdom and other less numerous in many other parts of Europe such as Netherlands, Austria, Croatia, Armenia, Greece, Portugal and others arrived after that first migration, especially during the World Wars, the Spanish Civil War (1930s) a large percentage being Aragonese, Asturians, Catalans, Galicians, Navarrese and Basques; reaching a significant number of immigrants from Europe (mainly Germany and Spain).

There are also small communities of Jews (i.e. from Russia, Poland, Macedonia, Hungary, Central and Eastern Europe) and Arabic (Lebanon, Syria and Palestine) peoples, proof of this phenomenon of immigration from Europe and to a lesser extent, Jewish and Arabic are the various clubs, schools, and sections of the city of Temuco. There are East Asian colonies of Chinese, Japanese and Koreans in Temuco, dating back to the end of the Korean War in the 1950s when thousands of Korean refugees settled through U.N. relocation programs to Chile.[citation needed]

Temuco, capital of the Araucanía Region, is located in the center-south of Chile, equidistant between the Pacific Ocean and the Andes. Morphologically, the city placement corresponds to Cautín River-originated fluvial land masses that developed in a crushed form between two hills, Ñielol (350m) and Conunhueno (360m).

The city is surrounded by an environment typical to central-southern Chile, consisting mostly of plantations of coniferous forests in the midst of a central prairie of deciduous forests, moraines and cones next to the foothills of the Andes. The zone produces many crops and fruits, and has an abundance of forests, particularly alerce, roble and lingue. Despite all this, air quality has deteriorated because burning wood is the primary source of heat for most of the city. Air pollution is diminished in winter by the frequent rains. Nevertheless, air in Temuco remains the second most polluted in Chile, after Santiago.[5]

Climatologically, Temuco corresponds to Chile's central valley Mediterranean region, with more humid and temperate weather. Through the year, cyclonic and anticyclonic influences alternate, with a short dry summer period (when compared to Santiago or other central valley cities). Its mean annual temperature is 13 °C (55 °F), with highest median during the warmest month of 23.5 °C (74 °F) and lowest median during the coldest month of 3.5 °C (38 °F) (Ciren-Corfo, 1992). Annual mean rain during 1961-1990 (Dirección Meteorológica de Chile, 1991) was 1,157 millimetres (45.6 in) (Capelli de Steffens et al., 1997).

As a commune, Temuco is a third-level administrative division of Chile administered by a municipal council, headed by an alcalde who is directly elected every four years. The 2008-2012 alcalde is Miguel Becker Alvear (RN).[1][2]

Within the electoral divisions of Chile, Temuco is represented in the Chamber of Deputies by Germán Becker (RN) and René Saffirio (PDC) as part of the 50th electoral district, (together with Padre Las Casas). The commune is represented in the Senate by José Garcia Ruminot (RN) and Eugenio Tuma Zedan (PPD) as part of the 15th senatorial constituency (Araucanía-South).

Traffic is frequently congested during working hours and parking on public streets in the downtown sector is difficult to find and is controlled with parking fees. Many streets are one-way, and marked with an arrow, if and when visible or installed.

In residential areas people frequently park on either side of the street, regardless of traffic direction and in some areas vehicles may be seen parked either entirely or partially—with only one side of the vehicle—on the sidewalk or grass area.

Traffic signals frequently use green arrows to control turns and right hand turns are not permitted when a red light is showing unless there is a specific sign authorizing such a turn.

Drivers often disregard marked traffic lanes and many buses and collective taxis will stop virtually anywhere to take on or discharge passengers. 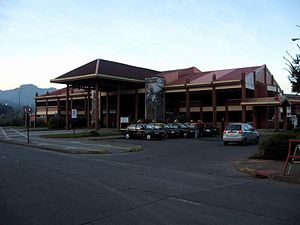 Buses and collective taxis are the most popular modes of mass transit. The bus fare is CLP$150 for students and $450 for adults; the colectivos charge $500 ($650 at night). Regular taxis are also available.

La Araucanía Airport is commercial air terminal for Temuco located to the south of the city, near the town of Freire, about 20 minutes south of Temuco.

The railroad connects Temuco with Victoria to the north and points in between.

Temuco does not have a rapid transit rail system.

Long-haul buses run from the Terminal Rodoviario de la Araucania [1], at the northern approach to town.

File:Tco Torre.jpg
The Campanario Tower, the second tallest highrise in the city

Is the principal artery in Temuco. Here we can find The Araucaria Museum building (19th century Chilean style); the Menchaca Lira Campus of Art Building (a Victorian Style building, recently restored); The English Alley, where we can find the Red Cross Building and not long ago a blue house which was dismantled to be rebuilt elsewhere (as a Heritage recovery project by the school of architecture of a known University of Temuco), both Neoclassical styled.

Recently, Alemania Av. has become an important commercial centre. Several restaurants, night clubs, pubs, bistros, pharmacies, boutiques, banks, supermarkets and two shopping malls have been opened there. There is also a Casino and a five stars hotel in the same avenue.

Nevertheless, the core of Downtown Temuco is the Main Square Anibal Pinto. Temuco's Main Square is the only one in Chile that was not built with a water fountain in its centre; an art gallery was built in 1981 as part of a total renewal. Compared to other main squares of southern Chile, Temuco's looks very modern. It was named one of Chile's most beautiful plazas.

The Ñielol Hill represents the original forest of the whole southern Chile area as it was before the Spanish people colonised it. It has also a special meaning for the Mapuche people living in the Region. We can also find a restaurant at the top of the Hill and a viewpoint of the east side of the city and Padre Las Casas, across the river. It is a "must" for visitors. The Southern Andean Volcano Observatory has its office there.