The Teochew variety (Chinese: 潮州話; pinyin: Cháozhōuhuà; Vietnamese: Triều Châu, Chaozhou dialect: Diê⁵suan³ uê⁷; Shantou dialect: Dio⁵ziu¹ uê⁷) of Southern Min is a variety of Chinese spoken in the Chaoshan region of eastern Guangdong and by the Teochew diaspora around the world. Teochew is sometimes spelled Chiuchow in Cantonese.[5]

Teochew preserves many Old Chinese pronunciations and vocabulary that have been lost in some of the other modern varieties of Chinese. As such, many linguists[who?] consider Teochew one of the most conservative Chinese dialects.[citation needed]

Teochew is a member of the Southern Min or Min Nan dialect group, which in turn constitutes a part of Min Chinese, one of the seven major dialect groups of Chinese. As with other varieties of Chinese, it is not very mutually intelligible with other dialect groups of China but is mutually intelligible with some other Southern dialects, such as those of Zhangzhou and Quanzhou.[citation needed] Even within the Teochew varieties, there is substantial variation in phonology between different regions of Chaoshan and between different Teochew communities overseas.

The Chaozhou dialect in China be roughly divided into three sub-groups defined by physically proximate areas: 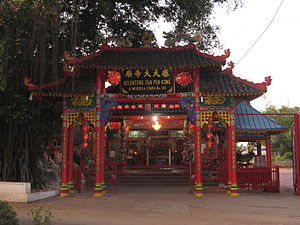 A Teochew Chinese temple in Ketapang, West Kalimantan, Indonesia on the island of Borneo

Modern Teochew is a variety of Southern Min. From the 9th-15th century, a group of Min people migrated south from Fujian to the coastal region of eastern Guangdong now known as Chaoshan. This migration was most likely due in part to overpopulation in Fujian.[citation needed] Due to geographical isolation from Fujian, Teochew evolved into a separate variety.

The Chaoshan region where Chaozhou is spoken includes the cities of Chaozhou and Shantou, which are jointly the source of the name, as well as Jieyang, Chaoyang, Puning, Chao'an, Raoping, Huilai, Chenghai, Nanao, Lufeng, Haifeng, Shanwei and Huidong. Parts of the Hakka-speaking region, like Jiexi County, Dabu County and Fengshun, are also Teochew-speaking.

The administrative region now known as Chaoshan in China was one of the major sources of Chinese emigration to Southeast Asia during the 18th to 20th centuries, forming one of the larger dialect groups among the Overseas Chinese. In particular, the Teochew people settled in significant numbers in Thailand, Cambodia and Laos, where they form the largest Chinese dialect group. They constitute a significant minority in Hong Kong, Taiwan, Vietnam, Malaysia (Johor and Selangor), Singapore, and Indonesia (especially in the Bangka-Belitung Islands, North Sumatra, Riau, the Riau Islands, and West Kalimantan on Borneo). Teochew speakers also live in Japan, South Korea, Australia, New Zealand, Canada, the United States of America, France, Germany, and England, a result of both direct emigration from Chaoshan to these nations and secondary emigration from Southeast Asia.

In Singapore, due to influences from the media and the government such as the Speak Mandarin Campaign, Chinese Singaporeans whose ancestral language is Teochew are either converting to English, Standard Chinese or Hokkien, the last of which Teochew shares a certain degree of mutual intelligibility. Teochew remains the ancestral language of many Chinese people in Singapore - Teochew people are the second largest Chinese group in Singapore, after the Hokkien - although Mandarin is gradually supplanting Teochew as their mother tongue, especially among the younger generations. In Thailand, particularly in Bangkok, Teochew is still spoken among older ethnic Chinese Thai citizens; however, the younger generation tends to learn Standard Chinese as a third language after Thai and English.

Teochew was never popular in Chinese communities in Japan and South Korea since most of the Teochew people who migrated to these countries are secondary immigrants from Hong Kong and Taiwan. Most of them are second generation people from Hong Kong and Taiwan who speak Cantonese and Mandarin as well as Korean and Japanese, leaving Teochew to be spoken mostly by elders.

This refers to Chaozhou, the variety of Teochew spoken in China.

Chaozhou children are introduced to Standard Chinese as early as in kindergarten; however, Chaozhou remains the primary medium of instruction. In the early years of primary education, Mandarin becomes the sole language of instruction, although students typically continue to talk to one another in Chaozhou. Mandarin is widely understood, however minimally, by most younger Chaozhou speakers, but the elderly usually do not speak Mandarin since teaching was done in the local vernacular in the past.

Native Chaozhou speakers find the neutral tone in Mandarin hardest to master. Chaozhou has lost the alveolar nasal ending [-n] and so the people often replace the sound in Mandarin with the velar nasal [-ŋ]. None of the southern Min dialects has a front rounded vowel, therefore a typical Chaozhou accent supplants the unrounded counterpart [i] for [y]. Chaozhou, like its ancient ancestor, lacks labio-dentals; people therefore substitute [h] or [hu] for [f] when they speak Mandarin. Chaozhou does not have any of the retroflex consonants in the northern dialects, so they pronounce [ts], [tsʰ], [s], and [z] instead of [tʂ], [tʂʰ], [ʂ] and [ʐ].[original research?]

Since Chao'an, Raoping and Jieyang border the Hakka-speaking region in the north, some people in these regions speak Hakka, though they can usually speak Chaozhou as well. Chaozhou people have historically had a great deal of contact with the Hakka people, but Hakka has had little, if any, influence on Chaozhou. Similarly, in Dabu and Fengshun, where the Chaozhou- and Hakka-speaking regions meet, Chaozhou is also spoken although Hakka remains the primary form of Chinese spoken there.

Because of the influence of Hong Kong soap operas and Guangdong provincial television programs, many young Chaoshan people can understand quite a lot of Cantonese even if they cannot speak it.

In the mountainous area of Fenghuang (凤凰山; 鳳凰山), the She language, an endangered Hmong–Mien language, is spoken by the She people, who are an officially-recognised non-Han ethnic minority. She people predominantly speak Hakka Chinese; only about a thousand She still speak the She language.

Teochew, like other Southern Min varieties, is one of the few modern Sinitic languages which have voiced obstruents (stops, fricatives and affricates); however, unlike Wu and Xiang Chinese, the Teochew voiced stops and fricatives did not evolve from Middle Chinese voiced obstruents, but from nasals. The voiced stops [b] and [ɡ] and also [l] are voicelessly prenasalised [ᵐ̥b], [ᵑ̊ɡ], [ⁿ̥ɺ], respectively. They are in complementary distribution with the tenuis stops [p t k], occurring before nasal vowels and nasal codas, whereas the tenuis stops occur before oral vowels and stop codas. The voiced affricate dz, initial in such words as 字(dzi˩), 二(dzi˧˥), 然(dziaŋ˥), 若(dziak˦) loses its affricate property with some younger speakers abroad, and is relaxed to [z].

Southern Min dialects are typified by a lack of labiodentals, as illustrated below:

Syllables in Teochew contain an onset consonant, a medial glide, a nucleus, usually in the form of a vowel, but can also be occupied by a syllabic consonant like [ŋ], and a final consonant. All the elements of the syllable except for the nucleus are optional, which means a vowel or a syllabic consonant alone can stand as a fully-fledged syllable.

Teochew rimes consist maximally of a medial, nucleus and coda. The medial can be i or u, the nucleus can be a monophthong or diphthong, and the coda can be a nasal or a stop. A syllable must consist minimally of a vowel nucleus or syllabic nasal.

Teochew, like other Chinese varieties, is a tonal language. It has six tones (reduced to two in stopped syllables) and extensive tone sandhi.

As with sandhi in other Min Nan dialects, the checked tones interchange. The yang tones all become low. Sandhi is not accounted for in the description below.

The grammar of Teochew is similar to other southern Chinese dialects, especially with Hakka and Yue. The sequence 'subject–verb–object' is typical, like Mandarin, although 'subject–object–verb' is also possible using particles.

The personal pronouns in Teochew, like in other Chinese varieties, do not show case marking, therefore 我 [ua] means both I and me and 伊人 [iŋ] means they and them. The southern Min dialects, like some northern dialects, have a distinction between an inclusive and exclusive we, meaning that when the addressee is being included, the inclusive pronoun 俺 [naŋ] would be used, otherwise 阮 [ŋ]. No other southern Chinese variety has this distinction.

However, there are instances in which 個/个 [kai˥] can be dropped, such as when followed by a measure word, as in:

Teochew has the typical two-way distinction between the demonstratives, namely the proximals and the distals, as summarised in the following chart:

In Teochew passive construction, the agent phrase by somebody always has to be present, and is introduced by either 乞 [kʰoiʔ˦]* or 分 [puŋ˧], even though it is in fact a zero or indefinite agent as in:

s/he was killed (by someone)

While in Mandarin we can have the agent introducer 被 bèi or 給 gěi alone without the agent itself, it is not grammatical to say

the cup was broken.

Instead, we have to say:

Even though this 人 [naŋ˥] is unknown.

Note also that the agent phrase 分人 [puŋ˧ naŋ˥] always comes immediately after the subject, not at the end of the sentence or between the auxiliary and the past participle like in some European languages (e.g. German, Dutch)

Teochew uses the construction "X ADJ 過 [kue˨˩˧] Y", which is believed to have evolved from the Old Chinese "X ADJ 于 (yú) Y" structure to express the idea of comparison:

She is more beautiful than you.

However, due to influences from Mandarin, the Mandarin structure "X 比 Y ADJ" has also gained popularity over the years. Therefore, the same sentence can be re-structured and becomes:

Comparative construction with only one noun

Note: the 過- or 比-construction must involve two or more nouns to be compared; an ill-formed sentence will be yielded when only one is being mentioned:

This is different from English since the second noun being compared can be left out:

In this case, the 夭-construction has to be used instead:

She is more beautiful.

The same holds true for Mandarin and Cantonese in that another structure needs to be used when only one of the nouns being compared is mentioned. Note also that Teochew and Mandarin both use a pre-modifier (before the adjective) while Cantonese uses a post-modifier (after the adjective).

There are two words which are intrinsically comparative in meaning, i.e. 贏 [ĩã5] "better" and 輸 [su1] "worse". They can be used alone or in conjunction with the 過-structure:

This skirt is not as good as that one.

My computer (at home) is far better than his.

Note the use of the adverbial 好多 [hoʔ2 tsoi7] at the end of the sentence to express a higher degree.

This book is as heavy as that one.

To express the superlative, Teochew uses the adverb 上 [siaŋ5] or 上頂 [siaŋ5 teŋ2]. However, it should be noted that 上頂 is usually used with a complimentary connotation.

This (restaurant) is (absolutely) the most delicious.

They treat me best.

The vocabulary of Teochew shares a lot of similarities with Cantonese, owing to their continuous contact with each other.[ambiguous] Like Cantonese, Teochew has a great deal of monosyllabic words.[citation needed] However, ever since the standardisation of Modern Standard Chinese, Teochew has absorbed a lot of Putonghua vocabulary, which is predominantly polysyllabic. In addition, Teochew varieties in Malaysia and Singapore have also borrowed extensively from Malay.

Teochew was romanised by the Provincial Education Department of Guangdong in 1960 to aid linguistic studies and the publication of dictionaries, although Pe̍h-ōe-jī can also be used because Christian missionaries invented it for the transcription of varieties of Southern Min. A modified version of the Guangdong Romanization called Peng'im is also used in online Teochew communities.

Many words in Teochew are nasalized. This is represented by the letter "n" in the Guangdong Pengim system.

Ending consonants in Teochew include M and NG as well as the stops discussed below.

Teochew retains many consonant stops lost in Mandarin. These stops include a labial stop: "b"; velar stop: "g"; and glottal stop: "h".