TerraSAR-X, a radar Earth observation satellite, is a joint venture being carried out under a public-private-partnership between the German Aerospace Center (DLR) and EADS Astrium. The exclusive commercial exploitation rights are held by the geo-information service provider Astrium. TerraSAR-X was launched on June 15, 2007 and has been in operational service since January 2008. With its twin satellite TanDEM-X, launched June 21, 2010, TerraSAR-X acquires the data basis for the WorldDEM, the worldwide and homogeneous DEM available from 2014.

With its phased array synthetic aperture radar (SAR) antenna (X-band wavelength 31 mm, frequency 9.6 GHz), TerraSAR-X acquires new high-quality radar images of the entire planet whilst circling Earth in a polar orbit at 514 km altitude. The orbit is selected such that the satellite flies in a sun-synchronous dusk-dawn orbit, which means that it moves along the day-night boundary of the Earth and always presents the same face to the sun, ensuring an optimum energy supply via the solar cells. TerraSAR-X is designed to carry out its task for five years, independent of weather conditions and illumination, and reliably provides radar images with a resolution of up to 1m.

In addition, the unique design of TerraSAR-X's SAR antenna allows a variety of polarimetric combinations: single or dual polarization and even full polarimetric data takes, are possible.

Depending on the desired application, one of four different product types (processing levels) can be selected

TanDEM-X (TerraSAR-X add-on for Digital Elevation Measurements) is a second, very similar spacecraft launched successfully on June 21, 2010 from Baikonur Cosmodrome in Kazakhstan. Since October 2010, TerraSAR-X and TanDEM-X fly in a close formation at distances of only a few hundred metres and record data synchronously.[3] This unique twin satellite constellation will allow the generation of WorldDEM, the global digital elevation models (DEMs). With an unprecedented accuracy, coverage and quality – WorldDEM is a consistent DEM of the Earth’s land surface is envisaged to be acquired and generated within three years after launch. Available from 2014, WorldDEM is to feature a vertical accuracy of 2m (relative) and 10m (absolute), within a horizontal raster of approximately 12x12 square meters, slightly varying depending on the geographic latitude.[4]

Satellite radar entered use more than fifteen years after optical camera systems did. The resolution (detail sharpness) is in principle lower, but radar can gather information at any time of the day or night and independent of cloud cover. This contributes significantly to the reliability of the system, a much-desired property.

Early radar satellite techniques were e.g. the Altimetrie (leveling over the sea), NASA's SEASAT (launched in 1978), regulation of waves/wind or soil data. Satellites like GRACE can measure for instance the speed of other satellites to mm/s exactly, and the slow deformation of volcanoes. The military has used radar since the late 1930s and radar satellites at least since 1978.[5]

TerraSAR X will exhibit some technical-industrial novelties. One of these innovations is a kind of zoom shot, with the resolution and scanning field vice versa changeable in a 1:10 relationship, either a larger area to grasp or a small area with the highest possible resolution.

Furthermore, the antenna can be aligned by electronics within an angle range so that the point of view is adjustable. Earlier radar satellites could radiate the antenna only in one direction.

With the adjustable angle radar sensor - along with other course refinements (precession by the earth flattening) - any place on earth can be observed preferentially within 1–3 days.

The ground operating mechanism and controls for the TerraSAR X is developed by the DLR in Oberpfaffenhofen. It consists of Mission Operating Equipment, the Payload Ground Segment and the Instrument Operation and Calibration Segment. At the base of the ground segment lies the German Space Operation Center (GSOC), the German Remote Sensing Datum Center (DFD) as well as Institutes for Methodology of Remote Sensing (MF) and the Institute for High-Frequency Engineering and Radar Systems (HR) which are all part of the DLR.

Applications of the high-resolution TerraSAR-X radar imagery include:

Scientific use of TerraSAR-X data

The scientific use of the TerraSAR-X data will be coordinated through the TerraSAR-X Science Service System by the DLR.[10] The new-quality data records, as provided by TerraSAR-X, will offer a vast amount of new research incentives, for instance in ecology, geology, hydrology and oceanography. The smallest movements of the Earth's surface (plate tectonics, volcanism, earthquake) are further scientific fields of application.

Commercial use of TerraSAR-X data

In order to ensure the commercial success of the mission, EADS Astrium founded its 100% subsidiary Infoterra in 2001; the company being responsible for establishing a commercial market for TerraSAR-X data as well as TerraSAR-X-based geo-information products and services. 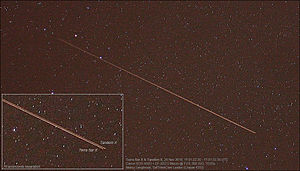 The radar remote sensing satellites TanDEM X and Terra SAR X photographed while flying in close formation (photo by Marco Langbroek, Leiden, the Netherlands). Movement is from lower right to upper left in this 10 second exposure.

Radars on the Space Shuttle:

(the TerraSAR-X authors were involved in SRL and SRTM missions)