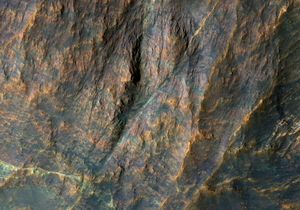 Banded bedrock in Terra Sabaea, in the ancient highlands north of the Hellas basin. The image is about a kilometer wide. Colors are enhanced.

Some landscapes look just like glaciers moving out of mountain valleys on Earth. Some have a hallowed out appearance, looking like a glacier after almost all the ice has disappeared. What is left are the moraines—the dirt and debris carried by the glacier. The center is hollowed out because the ice is mostly gone.[1] These supposed alpine glaciers have been called glacier-like forms (GLF) or glacier-like flows (GLF).[2] Glacier-like forms are a later and maybe more accurate term because we cannot be sure the structure is currently moving.[3] Another, more general term sometimes seen in the literature is viscous flow features (VFF).[3]

A variety of other features on the surface have also been interpreted as directly linked to flowing ice, such as fretted terrain,[4] lineated valley fill,[5][6] concentric crater fill,[7][8] and arcuate ridges.[9] A variety of surface textures seen in imagery of the midlatitudes and polar regions are also thought to be linked to sublimation of glacial ice.[8][10]

The pictures below show features believed to be glaciers—some may still contain ice; in others the ice has probably largely disappeared. Since ice may be present under just a few meters of debris, these places could be used to supply future colonists with water.

When there are perfect conditions for producing sand dunes, steady wind in one direction and just enough sand, a barchan sand dune forms. Barchans have a gentle slope on the wind side and a much steeper slope on the lee side where horns or a notch often forms.[11] The whole dune may appear to move with the wind. Observing dunes on Mars can tell us how strong the winds are, as well as their direction. If pictures are taken at regular intervals, one may see changes in the dunes or possibly in ripples on the dune’s surface. On Mars dunes are often dark in color because they were formed from the common, volcanic rock basalt. In the dry environment, dark minerals in basalt, like olivine and pyroxene, do not break down as they do on Earth. Although rare, some dark sand is found on Hawaii which also has many volcanoes discharging basalt. Barchan is a Russian term because this type of dune was first seen in the desert regions of Turkistan.[12] Some of the wind on Mars is created when the dry ice at the poles is heated in the spring. At that time, the solid carbon dioxide (dry ice) sublimates or changes directly to a gas and rushes away at high speeds. Each Martian year 30% of the carbon dioxide in the atmosphere freezes out and covers the pole that is experiencing winter, so there is a great potential for strong winds.[13] Some places in Terra Sabaea show dunes, as in the images below.

A concentric crater fill is a landform where the floor of a crater is mostly covered with a large number of parallel ridges.[14] It is common in the mid-latitudes of Mars,[15][16] and is widely believed to be caused by glacial movement.[17][18]

Many places on Mars show rocks arranged in layers. Rock can form layers in a variety of ways. Volcanoes, wind, or water can produce layers.[19] Groundwater may have been involved in the formation of layers in some places.