From Infogalactic: the planetary knowledge core
Jump to: navigation, search
This article is about the current train service brand. For other uses of the names, see Thameslink (disambiguation) and Great Northern. 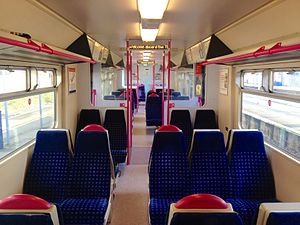 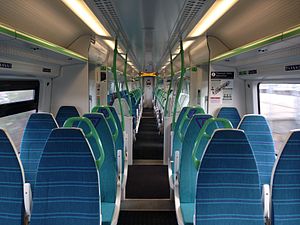 The interior of a new Thameslink Class 387 train

Thameslink and Great Northern services were merged into one franchise in 2006 due to the Thameslink Programme. In 2012, it was announced that services of First Capital Connect, Southern (with Gatwick Express) and some Southeastern routes would be merged into a single franchise for the expanding Thameslink network.[1] The Invitation to Tender was to have been issued in October 2012, with the successful bidder announced in Spring 2013 and TSGN originally due to start in September 2013. However, due to the collapse of the InterCity West Coast re-franchising process, all franchising competitions were frozen until January 2013.[2] In January 2013 the government announced that it would extend the contract until March 2014, intending to negotiate with FirstGroup to operate the franchise on a management contract for up to two years.[3]

On 14 September 2014, Thameslink and Great Northern took over from First Capital Connect, serving 122 stations and operating a fleet of 226 trains. In December 2014, full control was taken of the Sevenoaks Thameslink service (this service was previously jointly operated with Southeastern).

As of 13 December 2015, the current routes operated off-peak Monday to Friday are with frequencies measured in trains per hour:[8]

Peak-time-only services on Thameslink routes include:

In 2011 the consortium Cross London Trains Ltd. consisting of Siemens Project Ventures, 3i Infrastructure plc and Innisfree Ltd was announced as preferred bidder with Siemens to manufacture and maintain the rolling stock to run on the Thameslink routes from 2016. This was a politically controversial decision as the competing bidder Bombardier Transportation had a train factory in the UK.[9] Both the procurement process and final close of contract were significantly delayed, resulting in the expected first delivery date moving from 2012 to 2016. The trains are known as Class 700s and the £1.6 billion contract to manufacture and provide service depots for the trains was finalised in mid 2013.[10] A fleet of 115 8- and 12-car trains are expected to enter service between 2016 and 2018. Associated rolling stock depots are being built at Hornsey and Three Bridges.

Because of the delay in procuring the Class 700 trains, 29 Class 387 trains were ordered for the Thameslink route, facilitating the release of existing Class 319 trains to newly electrified routes. In the longer term, these new trains will in turn also be cascaded, to the Thames Valley service. Delivery was completed in 2014 and the trains entered service later that year. The order includes provision for an extra 140 vehicles.[11][5] Once the Class 700s begin entering service, the Class 387s will be transferred to Great Western Railway for use on routes in the Thames Valley.[12]

In addition to the introduction of the new Class 700 units, GTR also plan to procure a further 25 new 6-car trains for use on Great Northern suburban services that originate from London Moorgate, replacing the 35-year-old Class 313 trains.[13][14] In December 2015 it was announced that Siemens would be providing these new trains as a follow-on to the Class 700 order.[15][16]

File:ThameslinkAndGreatNorthern.svg
The logo at the start of the franchise. 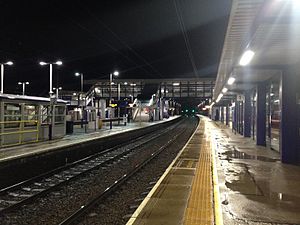 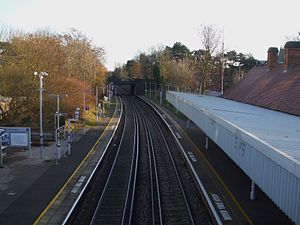 Beckenham Hill transferred from Southeastern to Thameslink management in December 2014

This franchise is different from other franchises let since privatisation in 1996. Now the operator, in this case Govia, gives all revenue to the government, rather than paying set premiums. The Department for Transport will pay Govia, totalling around £8.9bn over the franchise period of seven years, from the expected revenues of £12.4bn. With this Govia expects to make a 3% profit, and the risks on costs will be Govia's, while the DfT will profit or lose from fluctuations in revenue.[13] 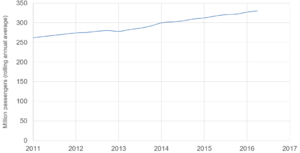 In February 2015, Thameslink and Great Northern came at the bottom of Which? magazine's Best and worst UK train companies customer survey, scoring a customer satisfaction score of 43%. Thameslink and Great Northern was also scored 2/5 stars in each of the specific categories covered by the survey (including Reliability, Punctuality and Cleanliness of toilets) - which is the worst performance of any UK train operator.[24]

Future of the franchise

On 21 January 2016 Transport for London announced that in 2021 it will take over the London suburban parts of the franchise, rebranding the routes as London Overground from that point.[25]