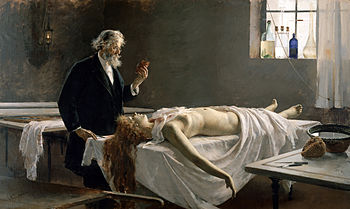 Thanatology is the scientific study of death. It investigates the mechanisms and forensic aspects of death, such as bodily changes that accompany death and the post-mortem period, as well as wider psychological and social aspects related to death. It is primarily an interdisciplinary study offered as a course of study at numerous colleges and universities.

The word is derived from the Greek language. In Greek mythology, Thanatos (θάνατος: "death") is the personification of death.[1] The English suffix -ology derives from the Greek suffix -logia (-λογια: "speaking").

In 1903, Russian scientist, Élie Metchnikoff, who was famous for his work in microbiology and the discovery of phagocytosis, advocated that without systematic attention to death, life sciences would not be complete. Through this argument, Metchnikoff called for the establishment of a scientific discipline devoted to the study of death. He argued that those who were dying had few or no resources for the experience of dying and that an academic study would help those facing death to have a better understanding of the phenomenon and reduce their fear of it.

Metchnikoff based his ideas for an interdisciplinary study on the fact that while medical students had their obligatory encounters with cadavers through anatomical studies there was almost no instruction on how to care for the dying, nor was there any research into death included in the curriculum. Because few scholars and educators agreed with Metchnikoff, the support he needed for the realization of his suggestion didn't materialize for decades.

Following World War II, the world was haunted with the memories of the many casualties. During this period of reflection many existential philosophers began considering life-and-death issues. One in particular was Herman Feifel, an American psychologist who is considered the pioneer of the modern death movement. Feifel broke the taboo on discussions of death and dying with the publication of his book The Meaning of Death.[2] In this book, Feifel[3] dispelled myths held by scientists and practitioners about death and the denial of its importance for human behaviour. It earned wide attention and became a classic in the new field, including as it did contributions from eminent thinkers such as psychiatrist Carl Jung, theologian Paul Tillich and philosopher Herbert Marcuse. Through The Meaning of Death, Feifel was able to lay the foundation for a field that would eventually be known as Thanatology. The field was to improve death education and grief counselling by the use of valid death-related data, methodology and theory.

However, this is only one of several important books in the field of thanatology. Other key texts include The Experience of Death by Paul-Louis Landsberg, the sections on temporality and death from Martin Heidegger's Being and Time, as well as works of a fictional nature, such as Leo Tolstoy's The Death of Ivan Ilyich and As I Lay Dying by William Faulkner.

In most cases, thanatology is not directly related to palliative care, which aims to provide treatment for dying individuals and their families. According to the World Health Organization, "palliative care is an approach that improves the quality of life of patients and their families facing the problem associated with life-threatening illness, involving the "treatment of pain and other problems, physical, psychosocial and spiritual".[4]

Thanatology does not directly explore the meaning of life and of death. Such questions are irrelevant to those studying the medical aspects. However, the question is very relevant to the psychological health of those involved in the dying process: individuals, families, communities, and cultures.

As an interdisciplinary study, thanatology relies on collaboration with many different fields of study. Death is a universal human concern; it has been examined and re-examined in a wide variety of disciplines, dating back to pre-history. Some of these fields of study are academic in nature; others have evolved throughout history as cultural traditions.

The humanities are, perhaps, the very oldest disciplines to explore death[citation needed]. Historically, the average human had a significantly lower standard of living and lifespan in the past than he or she would today. Wars, famine, and disease always kept death close at hand. Artists, authors, and poets often employed the universality of death as a motif in their works; this trend continues today[citation needed].

The social sciences are often involved on both the individual and on the cultural level. The individual level is primarily covered by psychology, the study of individual minds. Avoiding (or, in some cases, seeking) death is an important human motive; the fear of death affects many individuals' actions.

Several social sciences focus on the broad picture, and they frequently encounter the issue of death[citation needed]. Sociology is the study of social rules. Sub-disciplines within sociology, such as the sociology of disaster, focus more narrowly on the issue of how societies handle death. Likewise, cultural anthropology and archeology concern themselves with how current and past cultures deal with death, respectively. Society and culture are similar concepts, but their scopes are different. A society is an interdependent community, while culture is an attribute of a community: the complex web of shifting patterns that link individuals together. In any case, both cultures and societies must deal with death; the various cultural studies (many of which overlap with each other) examine this response using a variety of approaches.

Thanatology is a section of Forensic Sciences. The biological study of death helps explain what happens, physically, to individuals in the moment of dying and after-death bodily changes, so that the events that took place at the time of death and post-mortem can be clarified. In Psychiatry, the medical application of psychological principles and therapeutic drugs, is also involved; many licensed psychiatrists are required to take courses on thanatology during training. Medical ethics are also an important area of study, especially on the issue of euthanasia ("right to die").

There is also a branch of thanatology called music-thanatology which focuses on the use of "music vigils" to help the individual and their family.[5] A vigil consists of one or a team of music-thanatologists who visit the dying person. They play the harp and sing music based on changes that they observe in patient physiology as well as in interpersonal family dynamics. The music tends toward the meditative, and can be very helpful to the patient and others that are present. Often after a vigil, the dying person is more relaxed, less agitated, and is in less pain. Most music-thanatologists are certified by the Music-Thanatology Association International, and they use the initials "CM-Th" to designate certification by this professional organization. Many hospitals and hospices now have professional music-thanatologists on their staff.[6]