From Infogalactic: the planetary knowledge core
(Redirected from The Atlantic Monthly)
Jump to: navigation, search
For the ocean, see Atlantic Ocean. For other uses, see Atlantic (disambiguation).

The Atlantic is an American magazine, founded (as The Atlantic Monthly) in 1857 in Boston, Massachusetts, now based in Washington, D.C. It was created as a literary and cultural commentary magazine, growing to achieve a national reputation as a high-quality review with a moderate worldview.[2] The magazine has notably recognized and published new writers and poets, as well as encouraged major careers. It has also published leading writers' commentary on abolition, education, and other major issues in contemporary political affairs. The magazine has won more National Magazine Awards than any other monthly magazine.[3]

After experiencing financial hardship and a series of ownership changes, the magazine was reformatted as a general editorial magazine. Focusing on "foreign affairs, politics, and the economy [as well as] cultural trends", it is now primarily aimed at a target audience of serious national readers and "thought leaders".[4][5]

The first issue of the magazine was published on November 1, 1857.[6][7] The magazine's initiator and founder was Francis H. Underwood, an assistant to the publisher,[8][9][10] who received less recognition than his partners because he was "neither a 'humbug' nor a Harvard man".[11] The other founding sponsors were prominent writers, including Ralph Waldo Emerson; Oliver Wendell Holmes, Sr.; Henry Wadsworth Longfellow; Harriet Beecher Stowe; John Greenleaf Whittier; and James Russell Lowell, who served as its first editor.

In 2010, The Atlantic posted its first profit in the previous decade. In profiling the publication at the time, The New York Times noted the accomplishment was the result of "a cultural transfusion, a dose of counterintuition and a lot of digital advertising revenue."[12]

The magazine, subscribed to by over 400,000 readers, now publishes ten times a year.[13] As the former name suggests, it was a monthly magazine for 144 years until 2001, when it published eleven issues; it published ten issues yearly from 2003 on, dropped "Monthly" from the cover starting with the January/February 2004 issue, and officially changed the name in 2007. The Atlantic features articles in the fields of the arts, the economy, foreign affairs, political science, and technology. Regular contributors include James Fallows and Jeffrey Goldberg.[14]

In April 2005, The Atlantic's editors decided to cease publishing fiction in regular issues in favor of a newsstand-only annual fiction issue edited by longtime staffer C. Michael Curtis. They have since re-instituted the practice.[citation needed]

On January 22, 2008, TheAtlantic.com dropped its subscriber wall and allowed users to freely browse its site, including all past archives.[15] In addition to TheAtlantic.com, The Atlantic's web properties have expanded to include TheAtlanticWire.com, a news- and opinion-tracking site launched in 2009,[16] and in 2011, TheAtlanticCities.com, a stand-alone website devoted to global cities and trends.[17] According to a Mashable profile in December 2011, "traffic to the three web properties recently surpassed 11 million uniques per month, up a staggering 2500% since The Atlantic brought down its paywall in early 2008."[18]

TheAtlantic.com covers politics, business, entertainment, technology, health, international affairs, and more. In December 2011, a new Health Channel launched on TheAtlantic.com, incorporating coverage of food, as well as topics related to the mind, body, sex, family, and public health.[19] TheAtlantic.com has also expanded to visual storytelling with the addition of the In Focus photo blog, curated by Alan Taylor,[20] and the Video Channel.[21] 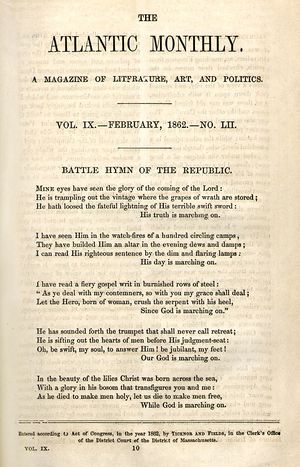 First publication of "Battle Hymn of the Republic"

A leading literary magazine, The Atlantic has published many significant works and authors. It was the first to publish pieces by the abolitionists Julia Ward Howe ("Battle Hymn of the Republic" on February 1, 1862), and William Parker's slave narrative, "The Freedman's Story" (in February and March 1866). It also published Charles W. Eliot's "The New Education", a call for practical reform that led to his appointment to presidency of Harvard University in 1869; works by Charles Chesnutt before he collected them in The Conjure Woman (1899); and poetry and short stories, helping launch many national literary careers.[citation needed] For example, Emily Dickinson, after reading an article in The Atlantic by Thomas Wentworth Higginson, asked him to become her mentor.[citation needed] In 2005, the magazine won a National Magazine Award for fiction.[citation needed] 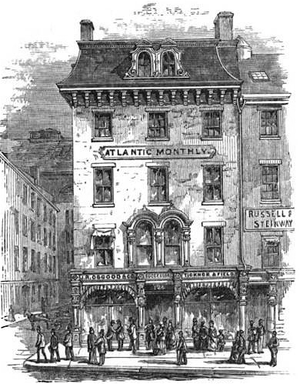 The magazine also published many of the works of Mark Twain, including one that was lost until 2001.[citation needed] Editors have recognized major cultural changes and movements; for example, the magazine published Martin Luther King, Jr.'s defense of civil disobedience in "Letter from Birmingham Jail" in August 1963.[23]

The magazine has also published speculative articles that inspired the development of new technologies. The classic example is Vannevar Bush's essay "As We May Think" (July 1945), which inspired Douglas Engelbart and later Ted Nelson to develop the modern workstation and hypertext technology.[citation needed]

In addition to its fiction and poetry, the magazine publishes writing on society and politics. "A three-part series by William Langewiesche in 2002 on the rebuilding of the World Trade Center generated headlines, as have articles by James Fallows on planning for the Iraq war and reconstruction."[24] 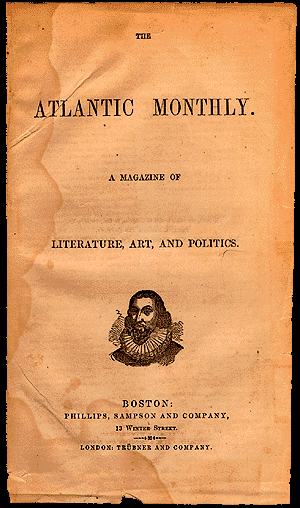 The cover of the original issue of The Atlantic, November 1, 1857

For all but recent decades, The Atlantic was known as a distinctively New England literary magazine (as opposed to Harper's and later The New Yorker, both from New York City). It achieved a national reputation and was important to the careers of many American writers and poets.[citation needed] By its third year, it was published by the famous Boston publishing house Ticknor and Fields (later to become part of Houghton Mifflin[citation needed]). The magazine was purchased in 1908 by its then editor, Ellery Sedgwick, but remained in Boston.

In 1980, the magazine was acquired by Mortimer Zuckerman, property magnate and founder of Boston Properties, who became its Chairman. On September 27, 1999, Zuckerman transferred ownership of the magazine to David G. Bradley, owner of the Beltway news-focused National Journal Group. Bradley had promised that the magazine would stay in Boston for the foreseeable future, as it did for the next five and a half years.

In April 2005, however, the publishers announced that the editorial offices would be moved from its long-time home at 77 North Washington Street in Boston to join the company's advertising and circulation divisions in Washington, D.C.[24] Later in August, Bradley told the New York Observer, cost cutting from the move would amount to a minor $200,000–$300,000 and those savings would be swallowed by severance-related spending. The reason was to create a hub in Washington where the top minds from all of Bradley's publications could collaborate under the Atlantic Media Company umbrella. Few of the Boston staff agreed to relocate, and Bradley embarked on an open search for a new editorial staff.[25]

In 2006, Bradley hired James Bennet as editor-in-chief, who had been the Jerusalem bureau chief for The New York Times. He also hired writers including Jeffrey Goldberg and Andrew Sullivan.[26] Jay Lauf joined the organization as publisher and vice-president in 2008.[27]

The Wire (previously known as The Atlantic Wire) is a sister site of TheAtlantic.com that aggregates news and opinions from online, print, radio, and television outlets.[28][29][30] When The Atlantic Wire first launched in 2009, it curated op-eds from across the media spectrum and summarized significant positions in each debate.[30] Expanded to encompass news and original reporting, regular features include "What I Read", showcasing the media diets of individuals from the worlds of entertainment, journalism, and politics, and "Trimming the Times",[31] a summary of the feature editor's choices of the best content in The New York Times. The Atlantic Wire rebranded itself as The Wire in November 2013.[32][33]

CityLab (formerly The Atlantic Cities) is the latest expansion of The Atlantic's digital properties, launched in September 2011. The stand-alone site has been described as exploring and explaining "the most innovative ideas and pressing issues facing today's global cities and neighborhoods."[34] Featuring the work of Richard Florida, urban theorist, professor, and Atlantic senior editor, TheAtlanticCities.com also has been described as showcasing leading voices in the urban planning and community building arenas.[35] The Atlantic Cities was rebranded as CityLab on May 16, 2014.[36] In June 2015, it hosted the U.S. launch of the Universe Within, the final installment in the Highrise web documentary project.[37]

In June 2006, the Chicago Tribune named it one of the top ten English-language magazines, describing it as "a gracefully aging ... 150-year-old granddaddy of periodicals" because "it keeps us smart and in the know" with cover stories on the then-forthcoming fight over Roe v. Wade. It also lauded regular features such as "Word Fugitives" and "Primary Sources" as "cultural barometers."[38]

On September 10, 2012, Salon criticized the current iteration of The Atlantic beginning with, "The magazine's features are always engaging but often seem to lack critical historical perspective", and the provocative, "Is the Atlantic making us stupid?"[39]

In January 14, 2013, The Atlantic's website published "sponsor content" about David Miscavige, the leader of the Church of Scientology. While the magazine had previously published advertising looking like articles, this one was met with wide criticism. The page comments were moderated by the marketing team with comments critical of the church being removed, while comments praising the church being downvoted by readers. Later that day, The Atlantic removed the piece from its website and issued an apology.[40][41][42]