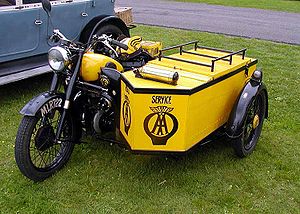 The Automobile Association (The AA) is a British motoring association founded in 1905, which was demutualised in 1999 to become a private limited company which currently provides car insurance, driving lessons, breakdown cover, loans, motoring advice and other services. Following demutualisation the AA Motoring Trust was created in 2002 to continue its public interest and road safety activities. In 2007 the AA merged with Saga Group to form Acromas Holdings. Acromas listed The AA on the London Stock Exchange in 2014 and it is now a constituent of the FTSE 250 Index. The company has published, among other things AA 2009 Road Atlas Great Britain and Ireland atlases in 2008.[2] 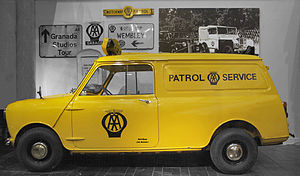 The Automobile Association was founded in 1905 to help motorists avoid police speed traps,[3] in response to the Motor Car Act 1903 which introduced new penalties for breaking the speed limit, for reckless driving with fines, endorsements and the possibility of jail for speeding and other driving offences. The act also required drivers to hold a driving licence (which was obtained on payment of 5 shillings and did not require a driving test) and to display a registration plate on their vehicle.

By 1906 the AA had erected thousands of roadside danger and warning signs and managed road signage until responsibility was passed to local authorities in the early 1930s.[3] By 1926 the organisation had installed 6,500 direction signs and 15,000 village signs,[4] most of which were removed during the Second World War.[5]

In 1908 the organisation published its first AA Members' Special Handbook containing a list of nationwide agents and mechanics with a free legal service the following year.[3]

AA patrols on bicycles warned motorists of police speed traps ahead. In 1910 in a legal test case ('Betts -v- Stevens') involving an AA patrolman and a potentially speeding motorist, the Chief Justice, Lord Alverston, ruled that where a patrolman signals to a speeding driver to slow down and thereby avoid a speed-trap, then that person would have committed the offence of 'obstructing an officer in the course of his duty' under the Prevention of Crimes Amendment Act 1885.[6][7] Subsequently the organisation developed a coded warning system, which was used until the 1960s, whereby a patrolman would always salute the driver of a passing car which showed a visible AA Badge unless there was a speed trap nearby, on the understanding that their officers could not be prosecuted for failing to salute.[8] The AA Handbook included the following message many times: "It cannot be too strongly emphasised that when a patrol fails to salute, the member should stop and ask the reason why, as it is certain that the patrol has something of importance to communicate."[4]

In 1910 the organisation introduced AA Routes and in 1912 began inspecting hotels and restaurants, issuing AA Star Classification to those deemed to be of sufficient quality[3] and introduced pre-purchase and post-accident repair checks in the 1920s.[3]

One reason given for the removal of all UK speed limits by the Road Traffic Act 1930 was that the Automobile Association and also the Royal Automobile Club were frequently successful in defending their members against evidence from the speed traps of the day.[citation needed] A speed limit of 30 mph in urban areas was re-introduced by the Road Traffic Act 1934 and speedometers were made compulsory in 1937.

After the war the AA 'led the protest' against petrol rationing which was repealed in 1950.[3] The organisation campaigned for the compulsory wearing of seat belts, and for the introduction of unleaded petrol. Seat belt legislation became law in the UK in 1983 as required by the Transport Act 1981.[3] They have lobbied successive governments over what they describe as 'unfair motoring taxes'.[9]

1949 saw the launch of a night-time breakdown and recovery service initially in London only before extending nationally.[3] The AA Insurance brokerage service, started in 1967, is currently the UK's largest motor insurance company.[3]

In February 1972 the AA relocated from its central London offices to Basingstoke.[10] It began broadcasting AA Roadwatch traffic reports on UK commercial radio stations the following year. AA Relay was also introduced in 1973, a service that will deliver a broken-down vehicle, its driver and passengers, luggage and trailer to anywhere in Britain.[3]

From 1906 until 1967 the AA distributed vehicle badges. These were to be returned upon the ceasing of the insurance contract, however, many were never returned. Recently[when?], many[clarification needed] of these badges have become collector's items, and have been known[by whom?] to sell for more than £200.[citation needed]

AA Cars was launched after a partnership was agreed between Vcars and The AA. The network, previously known as Vcars.co.uk, became AA Cars in July 2013.[11] At the time of rebranding over 110,000 cars were available for purchase via 2,000 registered dealers.[11]

One of the main reasons behind the launch of the new brand was due to statistics published in an AA/Populus study. The study suggested that one in three UK driver’s felt buying a car was a stressful experience.[12]

Unlike other websites within automotive classifieds industry, AA Cars provides a 26-point spot check on every vehicle.[12] Each 26-point spot check could show whether the car had outstanding finance, was registered stolen or had been written off by an insurer.[13]

Patrolman Pete is the brainchild of the UK Automobile Association’s publishing department. Designed to compete with the likes of Bob the Builder, Fireman Sam and Underground Ernie, a suite of books for 3-6 year-olds was published featuring the character, his faithful toolbox “Trevor” and his vehicle “Stan.”[citation needed]

The AA awards ratings according to a system based on quality standards agreed by the AA and the various UK tourist authorities.[14] Properties are awards a star rating, from one to five stars. In addition, each hotel receives a "Merit % Score" to enable comparison of hotels with similar star ratings. Hotels that are deemed to stand out may also receive a red star "AA Inspectors' Choice" award. A similar award for guest accommodation is the "Gold Star Award" for properties deemed to stand out.

The AA award a "Pennant rating" to campsites and caravan parks based on a five-point scale. A percentage score is also awarded to enable comparison of parks with the same "Pennant rating".

AA inspectors award AA rosettes based on a zero to five system. The standards are quite high and only about one in ten restaurants are deemed worthy of even one rosette.[14]