The Ellipse (officially called President's Park South) is a 52-acre (210,000 m²) park located just south of the White House fence. Properly, the Ellipse is the name of the five-furlong (1 km) circumference street within the park. The entire park is open to the public, and features various monuments. The Ellipse is also the location for a number of annual events. D.C. locals can often be heard to say they are "on the Ellipse", which is understood to mean that the individual is on the field that is bounded by Ellipse Road.

It is part of the President's Park.

In 1791, the first plan for the park was drawn up by Pierre (Peter) Charles L'Enfant. The Ellipse was known as "the White Lot" due to the whitewashed wooden fence that enclosed the park.

During the American Civil War, the grounds of the Ellipse and incomplete Washington Monument were used as corrals for horses, mules, and cattle, and as camp sites for Union troops.

The Army Corps of Engineers began work on the Ellipse in 1867. The park was landscaped in 1879, and American Elms were planted around the existing portion of roadway. In 1880, grading was begun and the Ellipse was created from what had been a common dump. In 1894, the Ellipse roadway was lit with electric lamps.

In the 1890s, Congress authorized the use of the Ellipse grounds to special groups, including religious meetings and military encampments. As late as 1990, baseball fields and tennis courts existed in the park. Sporting events and demonstrations are still held on the Ellipse. President's Park South came under the jurisdiction of the National Park Service in 1933.

On Christmas Eve 1923, President Calvin Coolidge started an unbroken tradition by lighting the first "National Christmas Tree". The first tree, a cut balsam fir, was placed on the Ellipse by the District of Columbia Public Schools. From 1924 to 1953, live trees in various locations around and on the White House grounds were lit on Christmas Eve. In 1954, the ceremony returned to the Ellipse and with an expanded focus: the "Christmas Pageant of Peace". From 1954 through 1972, cut trees were used, but in 1973 a Colorado blue spruce from York, Pennsylvania was planted on the Ellipse. A replacement was planted in 1978. 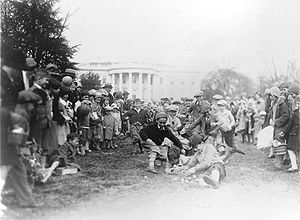 In 1942, during World War II, the National Park Service granted permission for the construction of barracks as a special emergency war-time measure. The temporary barracks were erected on the south side of the Old Executive Office Building and the entire First Division Monument grounds. The "White House Barracks" were demolished in 1954.

The Ellipse Visitor Pavilion was opened for visitors in May 1994. The facility is used to distribute free tickets for special events at the White House such as the Easter Egg Roll and the fall and spring Garden Tours. There also is an information window, concession area, restrooms, telephones, water fountains, and a first aid area, all accessible. 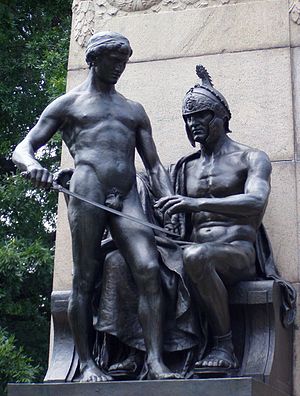 Annual events on the Ellipse include the Christmas Pageant of Peace, the "Twilight Tattoo" military pageant, and the graduation ceremony for The George Washington University. It is also the queueing location for the annual White House Easter Egg Roll and the White House garden tours. Under the auspices of the National Park Service, the Capital Alumni Network and a number of neighborhood and military sports leagues play softball and flag football games on the grounds of the Ellipse. A number of ultimate competitions are also held by various groups throughout the warmer months.

The Ellipse Meridian Stone, located slightly under the surface near the center of the Ellipse, commemorates President Thomas Jefferson's idea of an American prime meridian.