The Kingdom of God Is Within You

From Infogalactic: the planetary knowledge core
(Redirected from The Kingdom of God is Within You)
Jump to: navigation, search

The Kingdom of God Is Within You (Russian: Царство Божие внутри вас [Tsarstvo Bozhiye vnutri vas]) is a non-fiction book written by Leo Tolstoy. A philosophical treatise, the book was first published in Germany in 1894 after being banned in his home country of Russia.[1] It is the culmination of thirty years of Tolstoy's thinking, and lays out a new organization for society based on a literal Christian interpretation.

The Kingdom of God is Within You is a key text for Tolstoyan, nonviolent resistance, and Christian anarchist movements.[2] 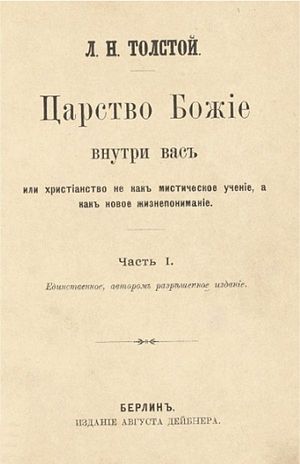 The title of the book is taken from Luke 17:21. In the book Tolstoy speaks of the principle of nonviolent resistance when confronted by violence, as taught by Jesus Christ. When Christ says to turn the other cheek, Tolstoy asserts that Christ means to abolish violence, even the defensive kind, and to give up revenge. Tolstoy rejects the interpretation of Roman and medieval scholars who attempted to limit its scope.

“How can you kill people, when it is written in God’s commandment: ‘Thou shalt not murder’?”

Tolstoy took the viewpoint that all governments who waged war are an affront to Christian principles. As the Russian Orthodox Church was—at the time—an organization merged with the Russian state and fully supporting state's policy, Tolstoy sought to separate its teachings from what he believed to be the true gospel of Christ, specifically the Sermon on the Mount.

Tolstoy advocated nonviolence as a solution to nationalist woes and as a means for seeing the hypocrisy of the church. In reading Jesus' words in the Gospels, Tolstoy notes that the modern church is a heretical creation:

“Nowhere nor in anything, except in the assertion of the Church, can we find that God or Christ founded anything like what churchmen understand by the Church.”

Tolstoy presented excerpts from magazines and newspapers relating various personal experiences, and gave keen insight into the history of non-resistance from the very foundation of Christianity, as being professed by a minority of believers. In particular, he confronts those who seek to maintain status quo:

“That this social order with its pauperism, famines, prisons, gallows, armies, and wars is necessary to society; that still greater disaster would ensue if this organization were destroyed; all this is said only by those who profit by this organization, while those who suffer from it – and they are ten times as numerous – think and say quite the contrary.” 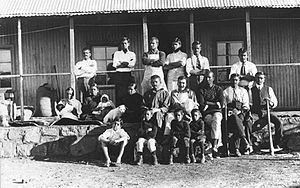 Mohandas Gandhi wrote in his autobiography The Story of My Experiments with Truth (Part II, Chapter 15) that this book "overwhelmed" him and "left an abiding impression." Gandhi listed Tolstoy's book, as well as John Ruskin's Unto This Last and the poet Shrimad Rajchandra (Raychandbhai), as the three most important modern influences in his life.[3] Reading this book opened up the mind of the world-famous Tolstoy to Gandhi, who was still a young protester living in South Africa at the time.

In 1908 Tolstoy wrote, and Gandhi read, A Letter to a Hindu,[4] which outlines the notion that only by using love as a weapon through passive resistance could the native Indian people overthrow the colonial British Empire. This idea ultimately came to fruition through Gandhi's organization of nationwide nonviolent strikes and protests during the years 1918–1947. In 1909, Gandhi wrote to Tolstoy seeking advice and permission to republish A Letter to a Hindu in his native language, Gujarati. Tolstoy responded and the two continued a correspondence until Tolstoy's death a year later in 1910. The letters concern practical and theological applications of nonviolence, as well as Gandhi's wishes for Tolstoy's health. Tolstoy's last letter was to Gandhi.[5]