From Infogalactic: the planetary knowledge core
Jump to: navigation, search
This article is about the camera system. For the constellation of five NASA satellites, see THEMIS. For other uses, see Themis (disambiguation). 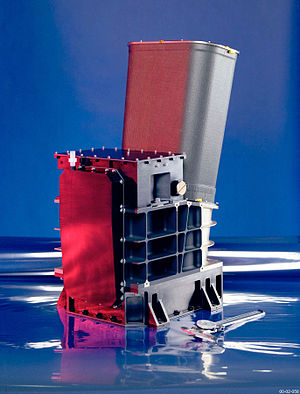 The THEMIS instrument, before being mounted onto Mars Odyssey.

The Thermal Emission Imaging System (THEMIS) is a camera on board the 2001 Mars Odyssey orbiter. It images Mars in the visible and infrared parts of the electromagnetic spectrum in order to determine the thermal properties of the surface and to refine the distribution of minerals on the surface of Mars as determined by the Thermal Emission Spectrometer (TES). Additionally, it helps scientists to understand how the mineralogy of Mars relates to its landforms, and it can be used to search for thermal hotspots in the Martian subsurface.

THEMIS is managed from the Mars Space Flight Facility at Arizona State University and was built by the Santa Barbara Remote Sensing division of Raytheon. The instrument was named after the Greek goddess of justice. 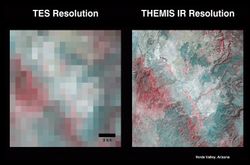 THEMIS detects thermal infrared energy emitted by the Martian surface at nine different wavelengths. Eight of these have wavelengths between 6 and 13 micrometers, an ideal region of the infrared spectrum to determine thermal energy patterns characteristic of silicate minerals. The ninth band is at 14.9 micrometers and is used to monitor the Martian atmosphere. The shortest infrared wavelength, at 6.78 micrometers, is measured twice in two bands to improve the signal-to-noise ratio. THEMIS is therefore a 10-band instrument that detects nine different wavelengths [1].

The absorption spectrum measured by THEMIS contains two kinds of information: temperature and emissivity. The temperature contribution to the measurement dominates the spectrum unless the data is corrected. In effect, a THEMIS infrared image taken during the day will look much like a shaded relief map, with slopes facing the sun being bright (hot) and shaded areas being dark (cold). In a THEMIS image taken at night however, thermophysical properties of the surface can be inferred, such as temperature differences due to the materials grain size (thermal inertia).

The effect of temperature can be removed from THEMIS infrared data by dividing the image by a black body curve. The resulting energy pattern is an emissivity spectrum characteristic of the specific minerals (or other things) found on the surface. The presence of minerals such as carbonates, silicates, hydroxides, sulfates, amorphous silica, oxides, and phosphates can be determined from THEMIS measurements.

In particular, this multi-spectral method allows researchers to detect the presence of minerals that form in water and to understand those minerals in their geological context. 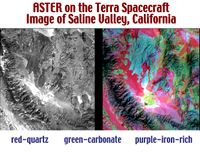 The instrument's approach provides data on localized deposits associated with volcanoes, hydrothermal processes, and the alteration of minerals by surface and/or subsurface water.

The Advanced Spaceborne Thermal Emission and Reflection Radiometer (ASTER), an Earth orbiting instrument on the Terra spacecraft, has used a similar approach to map the distribution of minerals on Earth. Variations in the thermal infrared false-color image are due to differences in the minerals that make up rocks and soil.

THEMIS found a wide range of igneous rocks and minerals. Some of the rocks were low-silica basalts, high silica dacite, olivine basalts ultramafic (picratic) basalts, and quartz-bearning granitoid rocks. The olivine basalts were present in a variety of locations, such as on crater floors and in some canyon wall layers. The mineral olivine is important because it is common in more primitive magmas from the mantle and it weathers quickly when mositure is present. So if olivine is present, the climate must have been dry since the time that olivine was exposed. Quartz-bearing rocks were found in the central uplifts in craters. Rocks in the central uplifts were probably once buried several kilometers beneath the surface, but raised by the impact process. Rocks of dacite composition show that within magma chambers frational crystallization occurred.[1] In this process, some minerals form crystals, then settle to the bottom of the chamber. Having a variety of rocks increases the chances that some useful/valuable minerals may be found on Mars.

THEMIS has a visible imaging camera that acquires data in five spectral bands, takes images with a spatial resolution of 18 m (59'), and can resolve objects about the size of a semi-trailer. This resolution is intermediate between large-scale images from the Viking Orbiters (150 to 300 meters per pixel) and the high-resolution images from the Mars Orbiter Camera (MOC) on board Mars Global Surveyor (1.5 to 3 meters per pixel). Visible images from THEMIS are usually close to 20 km wide (12 miles).[2]

The THEMIS visible camera's stated purpose is to determine the geological record of past liquid and volcanic environments on Mars. Additionally, this dataset can be used in conjunction with the infrared data to identify potential landing sites for future Mars missions.

Images from the Oxia Palus quadrangle

Other Images from THEMIS