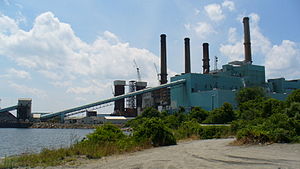 Urban runoff—stormwater discharged to surface waters from roads and parking lots—can also be a source of elevated water temperatures. 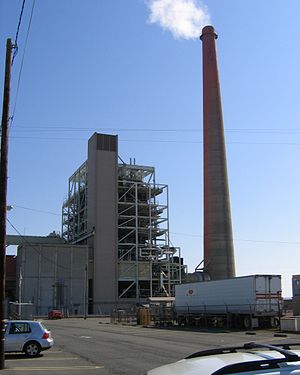 Elevated temperature typically decreases the level of dissolved oxygen of water. This can harm aquatic animals such as fish, amphibians and other aquatic organisms. Thermal pollution may also increase the metabolic rate of aquatic animals, as enzyme activity, resulting in these organisms consuming more food in a shorter time than if their environment were not changed.[4]:179 An increased metabolic rate may result in fewer resources; the more adapted organisms moving in may have an advantage over organisms that are not used to the warmer temperature. As a result, food chains of the old and new environments may be compromised. Some fish species will avoid stream segments or coastal areas adjacent to a thermal discharge. Biodiversity can be decreased as a result.[5]:415-17 [6]:340

High temperature limits oxygen dispersion into deeper waters, contributing to anaerobic conditions. This can lead to increased bacteria levels when there is ample food supply. Many aquatic species will fail to reproduce at elevated temperatures.[4]:179-80

Primary producers (e.g. plants, cyanobacteria) are affected by warm water because higher water temperature increases plant growth rates, resulting in a shorter lifespan and species overpopulation. This can cause an algae bloom which reduces oxygen levels.

Temperature changes of even one to two degrees Celsius can cause significant changes in organism metabolism and other adverse cellular biology effects. Principal adverse changes can include rendering cell walls less permeable to necessary osmosis, coagulation of cell proteins, and alteration of enzyme metabolism. These cellular level effects can adversely affect mortality and reproduction.

A large increase in temperature can lead to the denaturing of life-supporting enzymes by breaking down hydrogen- and disulphide bonds within the quaternary structure of the enzymes. Decreased enzyme activity in aquatic organisms can cause problems such as the inability to break down lipids, which leads to malnutrition.

In limited cases, warm water has little deleterious effect and may even lead to improved function of the receiving aquatic ecosystem. This phenomenon is seen especially in seasonal waters and is known as thermal enrichment. An extreme case is derived from the aggregational habits of the manatee, which often uses power plant discharge sites during winter. Projections suggest that manatee populations would decline upon the removal of these discharges.

Releases of unnaturally cold water from reservoirs can dramatically change the fish and macroinvertebrate fauna of rivers, and reduce river productivity. In Australia, where many rivers have warmer temperature regimes, native fish species have been eliminated, and macroinvertebrate fauna have been drastically altered. This may be mitigated by designing the dam to release warmer surface waters instead of the colder water at the bottom of the reservoir.[7]

When a power plant first opens or shuts down for repair or other causes, fish and other organisms adapted to particular temperature range can be killed by the abrupt change in water temperature, either an increase or decrease, known as "thermal shock."[6]:208 [8]:478

Sources and control of thermal pollution 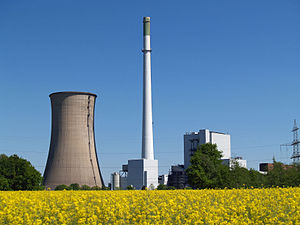 In the United States, about 75 to 82 percent of thermal pollution is generated by power plants.[6]:335 The remainder is from industrial sources such as petroleum refineries, pulp and paper mills, chemical plants, steel mills and smelters.[9][10] Heated water from these sources may be controlled with:

Some facilities use once-through cooling (OTC) systems which do not reduce temperature as effectively as the above systems. For example, the Potrero Generating Station in San Francisco (closed in 2011), used OTC and discharged water to San Francisco Bay approximately 10°C (20°F) above the ambient bay temperature.[12]

During warm weather, urban runoff can have significant thermal impacts on small streams, as stormwater passes over hot parking lots, roads and sidewalks. Stormwater management facilities that absorb runoff or direct it into groundwater, such as bioretention systems and infiltration basins, can reduce these thermal effects. Retention basins (ponds) tend to be less effective at reducing temperature, as the water may be heated by the sun before being discharged to a receiving stream.[13]