From Infogalactic: the planetary knowledge core
Jump to: navigation, search
This article is about the travel entrepreneur. For other uses, see Thomas Cook (disambiguation).

Thomas Cook was born to Peter, who lived at 9 Quick Close in the village of Melbourne, Derbyshire.[1][1]

The couple's first child, he was named after Elizabeth's father, Thomas Perkins. John Cook died when Thomas was three years old, and his mother remarried later that same year.

At the age of 10, Cook started working as an assistant to a local market gardener for a wage of six pence a week. At the age of 14, he secured an apprenticeship with John Pegg, and spent five years as a cabinet maker.[1]

He was brought up as a strict Baptist, and joined his local temperance society. In February 1826, Cook became a preacher, and toured the region as a village evangelist, distributing pamphlets and occasionally working as a cabinet maker to earn money.[1] After working as a part-time publisher of Baptist and Temperance pamphlets, he became a Baptist minister in 1828.

In 1832, Cook moved to Adam and Eve Street in Market Harborough. Influenced by the local Baptist minister Francis Beardsall, he took the temperance pledge on New Year's Day in 1833. As a part of the temperance movement, he organised meetings and held anti-liquor processions.[1] 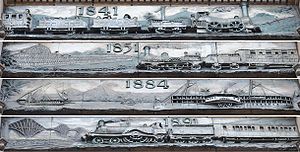 Cook's idea to offer excursions came to him while "walking from Market Harborough to Leicester to attend a meeting of the Temperance Society".[3] With the opening of the extended Midland Counties Railway, he arranged to take a group of 540 temperance campaigners from Leicester Campbell Street railway station to a rally in Loughborough, eleven miles away. On 5 July 1841, Thomas Cook arranged for the railway company to charge one shilling (5p) per person that included railway tickets and food for this train journey. Cook was paid a share of the fares actually charged to the passengers, as the railway tickets, being legal contracts between company and passenger, could not have been issued at his own price. This was the first privately chartered excursion train to be advertised to the general public, Cook himself acknowledging that there had been previous, unadvertised, private excursion trains.[4] During the following three summers he planned and conducted outings for temperance societies and Sunday school children. In 1844 the Midland Counties Railway agreed to make a permanent arrangement with him provided he found the passengers. This success led him to start his own business running rail excursions for pleasure, taking a percentage of the railway tickets.

File:Leicesterarrival.jpg
Leicester railway station - this was built between 1892 and 1894 to replace, largely on the same site, Campbell Street railway station, the origin for many of Cook's early tours.

On 4 August 1845 he arranged accommodation for a party to travel from Leicester to Liverpool. In 1846, he took 350 people from Leicester on a tour of Scotland, however his lack of commercial ability led him to bankruptcy. He persisted and found success when he claimed that he arranged for over 165,000 people to attend the Great Exhibition in London. Four years later, he planned his first excursion abroad, when he took a group from Leicester to Calais to coincide with the Paris Exhibition. The following year he started his 'grand circular tours' of Europe. During the 1860s he took parties to Switzerland, Italy, Egypt and United States. Cook established 'inclusive independent travel', whereby the traveller went independently but his agency charged for travel, food and accommodation for a fixed period over any chosen route. Such was his success that the Scottish railway companies withdrew their support between 1862 and 1863 to try the excursion business for themselves.

In 1872, he formed a partnership with his son, John A. Mason Cook, and renamed the travel agency as Thomas Cook & Son.[2] They acquired business premises on Fleet Street, London. By this time, Cook had stopped personal tours and became an agent for foreign or domestic travel. The office also contained a shop which sold essential travel accessories, including guide books, luggage, telescopes and footwear. Thomas saw his venture as both religious and social service; his son provided the commercial expertise that allowed the company to expand.

In accordance with his beliefs, he and his wife also ran a small temperance hotel above the office. Their business model was refined by the introduction of the 'hotel coupon' in 1866.

Detachable coupons in a counterfoil book were issued to the traveller. These were valid for either a restaurant meal or an overnight hotel stay provided they were on Cook's list.

Conflicts of interest between father and son were resolved when the son persuaded his father, Thomas Cook, to retire in 1879. He moved back to Leicestershire and lived quietly until his death.

The firm's growth was consolidated by John Mason Cook and his two sons, especially by its involvement with military transport and postal services for Britain and Egypt during the 1880s, when Cook began organising tours to the Middle East.

By 1888, the company had established offices around the world, including three in Australia and one in Auckland, New Zealand and in 1890, the company sold over 3¼ million tickets.[5]

John Mason Cook promoted, and even led, excursions to, for example, the Middle East where he was described as "the second-greatest man in Egypt".[5] However, while arranging for the German Emperor Wilhelm II to visit Palestine in 1898, he contracted dysentery and died the following year.