Thomas Galbraith was born in Glasgow, the son of Conservative politician Sir Tam Galbraith and his Belgian wife Simone du Roy de Blicquy.[1][2] His father was MP for Glasgow Hillhead from 1948 until his death in 1982, which triggered a by-election won by Roy Jenkins of the Social Democratic Party. Galbraith succeeded to the barony at the age of 25 on the death of his grandfather in 1985. 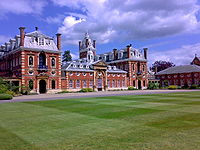 Galbraith was educated at Sussex House School, a day school in Cadogan Square, Chelsea in London and Wellington College, a co-educational independent school in Crowthorne, Berkshire, followed by the University of East Anglia, where he graduated with a Bachelor of Arts degree in Modern Languages and European Studies in 1982. He also studied at Aix-Marseille University, and is fluent in French.

Strathclyde entered the House of Lords in 1986, becoming a Junior Whip in 1988, then Minister for Tourism in 1989. Between 1990 and 1992 he was Minister for Agriculture and Fisheries in the Scottish Office. He then served in the Department of the Environment and the Department of Trade and Industry before being appointed Conservatives' Chief Whip in the House of Lords in 1994, succeeding Lord Ullswater. The next year, he was sworn of the Privy Council.

In 1998 Strathclyde, along with the Conservative front bench in the Lords, threatened to tender his resignation if the party refused to accept a proposed compromise plan for reform of the Lords that had been negotiated with Labour by Lord Cranborne, the Conservatives' leader in the Lords, unbeknown to the Leader of the Opposition (in the Commons) William Hague and to his annoyance. Hague however accepted the proposals, dismissing Cranborne for the conduct in negotiations, and Strathclyde was appointed to succeed him. Under his leadership the House of Lords Act 1999 passed: under this Strathclyde was elected by other peers as one of the 92 hereditary peers to remain in the House of Lords.

When the Conservatives formed a coalition government under David Cameron in May 2010, Strathclyde became Leader of the House of Lords and Chancellor of the Duchy of Lancaster, with a seat in the Cabinet.

On 7 January 2013, Strathclyde announced that he would be stepping down as Leader of the House of Lords and resigning from the Cabinet with immediate effect to pursue a second business career.[3] He was succeeded by Lord Hill of Oareford. He was subsequently appointed a Companion of Honour (postnomial: CH) for his services to the Lords.[4]

The family lives in Westminster and at the Galbraith family estate in Mauchline, Ayrshire.

Lord Strathclyde is a Governor of Wellington College, Berkshire.

He is a director of Auchendrane Estates Ltd, a landowning company in Scotland. His wealth is estimated at £10m.[6][7]

He was a non-executive director on the board of Trafigura's hedge-fund arm, Galena Asset Management, from 2004 until 2009.[8] Trafigura defended court actions during the 2006 Ivory Coast toxic waste dump scandal and The Guardian suggested his appointment may be an attempt to de-toxify the Dutch company globally.[9]

Styles of address and arms