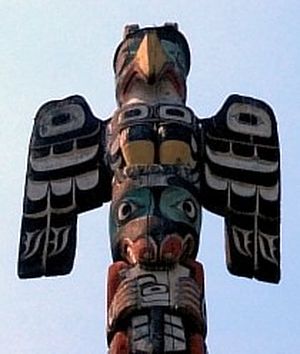 A Northwest Coast styled Kwakwaka'wakw totem pole depicting a thunderbird perched on the top. To Kwakwaka'wakw, different thunderbirds are ancestors, whom they descend from. 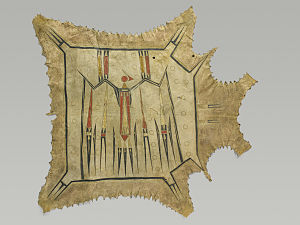 The thunderbird is a legendary creature in certain North American indigenous peoples' history and culture. It is considered a supernatural bird of power and strength. It is especially important, and frequently depicted, in the art, songs and oral histories of many Pacific Northwest Coast cultures, and is found in various forms among the peoples of the American Southwest, Great Lakes, and Great Plains.

Thunderbird mythology parallels tales of the Roc from around the Indian Ocean; like the roc, the thunderbird is generally assumed to be based on real (though mythically exaggerated) species of birds, namely the bald eagle, which is very common on the Northwest Coast. 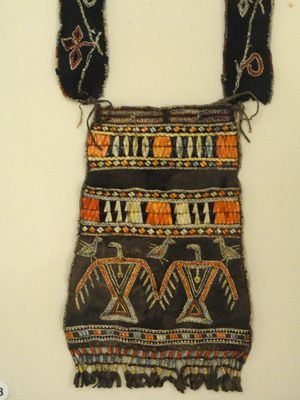 The thunderbird's name is said to originate from the belief that the beating of its enormous wings causes thunder and stirs the wind. The Lakota name for the thunderbird is Wakį́nyąn, from wakhąn, meaning "sacred", and kįyą, meaning "winged". The Kwakwaka'wakw have many names for the thunderbird, and the Nuu-chah-nulth (Nootka) called it Kw-Uhnx-Wa. The Ojibwa word for a thunderbird that is closely associated with thunder is animikii, while large thunderous birds are known as binesi.

Across many North American indigenous cultures, the thunderbird carries many of the same characteristics. It is described as a large bird, capable of creating storms and thundering while it flies. Clouds are pulled together by its wingbeats, the sound of thunder is made by its wings clapping, sheet lightning is the light flashing from its eyes when it blinks, and individual lightning bolts are made by glowing snakes that it carries in its talons. In masks, it is depicted as multi-colored, sometimes with two curling horns, and/or teeth within its beak.

Depending on cultural tradition, the thunderbird is either a singular entity or a species. In both cases, it is intelligent, powerful, and wrathful. All agree one should go out of one's way to keep from getting thunderbirds angry.

The singular thunderbird, such as found in the stories of the Nuu-chah-nulth people, was said to reside on the top of a mountain, and was the servant of the Great Spirit. It was also told that the thunderbird controlled rainfall. Plural populations of thunderbirds, such as taught by the Kwakwaka'wakw and Cowichan people, could shapeshift into human form by tilting back their beaks like a mask and by removing their feathers as if they were a feather-covered blanket. There are stories of thunderbirds in human form marrying into human families; some families may trace their lineage to such an event. Families of thunderbirds who kept to themselves but wore human form were said to have lived along the northern tip of Vancouver Island. The story goes that other tribes soon forgot the nature of one of these thunderbird families, and when one tribe tried to take them as slaves, the thunderbirds put on their feather blankets and transformed to take vengeance upon their foolish captors.

Sioux stories tell that in "old times" the thunderbirds destroyed dangerous reptilian monsters called the Unktehila. The Menominee of Northern Minnesota tell of a great mountain that floats in the western sky on which dwell the thunderbirds. They control the rain and hail and delight in fighting and deeds of greatness. They are the enemies of the great horned snakes - the Misikinubik - and have prevented these from overrunning the earth and devouring mankind. They are messengers of the Great Sun himself.[1]

The Anishinaabe, part of the Council of Three Fires, have many stories about thunderbirds. During the Sun dance, ceremony a thunderbird nest is put near the top of the tree of life. The dancers often face the nest while dancing, and their hands and arms reach up towards the nest at times. A thunderbird pipe is used during the ceremony, and thunderbird medicine is prepared as well. The area of Thunder Bay, Ontario, is related in some ways to the Anishinaabe stories of thunderbirds. A famous story of the thunderbird is "Thunderbird and Whale". Among the Winnebagos, it is said that a man who has a vision of a thunderbird during a solitary fast will become a war chief.[2]