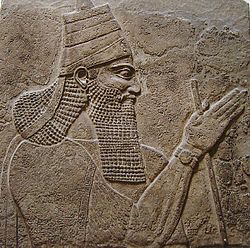 Tiglath-Pileser III: stela from the walls of his palace (British Museum, London).

Tiglath-Pileser III (from the Hebraic form[Note 1] of Akkadian: Tukultī-apil-Ešarra, "my trust is in the son of Esharra") was a prominent king of Assyria in the eighth century BCE (ruled 745–727 BCE)[1][2] who introduced advanced civil, military, and political systems into the Neo-Assyrian Empire.[3][4]

Tiglath-Pileser III seized the Assyrian throne during a civil war and killed the royal family. He made sweeping changes to the Assyrian government, considerably improving its efficiency and security. The Assyrian army, already the greatest fighting force in the world since the time of Ashur-uballit I (1366–1330 BCE), now became the world's first professional standing army.

Tiglath-Pileser III subjugated much of the Near East region; to the south, his fellow Mesopotamians in Babylonia and Chaldea, and further south still, the Arabs, Magan, Meluhha, and Dilmunites of the Arabian Peninsula. In the south west, Israel, Judah, Philistia, Samarra, Moab, Edom, the Suteans and Nabatea fell. To the north, Urartu, Armenia and Scythia in the Caucasus Mountains, Cimmeria by the Black Sea, and Nairi were subjugated, and in the north west much of eastern and south western Asia Minor, including the Hittites, Phrygia, Cilicia, Commagene, Tabal, Corduene and Caria. In the west, the Greeks of Cyprus and Aram (modern Syria), and the Mediterranean City States of Phoenicia/Caanan were subjugated. To the east he subjugated Persia, Media, Gutium, Mannea, Cissia and Elam, and later in his reign, Tiglath-Pileser III was crowned king in Babylonia.

Tiglath-Pileser III discouraged revolts against Assyrian rule with the use of forced deportations of thousands of people all over the empire. He is one of the greatest military commanders in world history, conquering most of the world known to the Assyrians before his death. 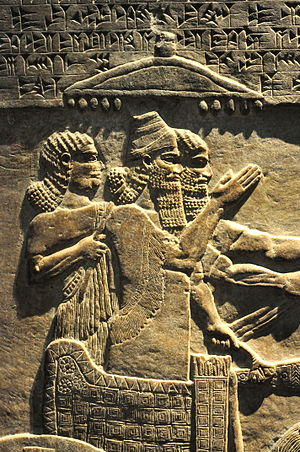 Tiglath-pileser III, an alabaster bas-relief from the king's central palace at Nimrud, Mesopotamia.

Formerly the governor of Kalhu (Biblical Calah/Nimrud)[3] and a general, the usurper Pulu assumed his Assyrian throne-name (Tiglath-Pileser) from two more-legitimate predecessors. He described himself as a son of Adad-nirari III in his inscriptions, but the accuracy of this claim remains uncertain. He seized the throne in the midst of civil war on 13 Ayaru, 745 BCE.[1][5] As a result of Pulu seizing the throne in a bloody coup d'état, the old royal family was slaughtered,[3] and the new monarch set Assyria on the path to expand the empire in order to ensure the survival of the kingdom.[3] 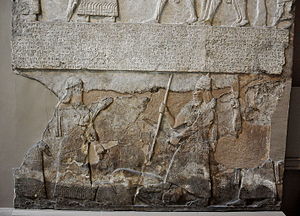 Tiglath-pileser III stands over an enemy, bas-relief from the Central Palace at Nimrud.

More so it was in Babylon that he was referred to as Pulu and his son as Ululayu.[7] Pulu and both his sons taking up Assyrian names is another suggestion that they were foreigners who had usurped the crown of Assyria at the revolt of Kalhu. 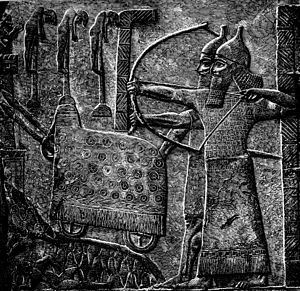 Assyrian power in the Near East greatly increased as the result of Tiglath-Pileser's military reforms (see "Reforms" below) and of his campaigns of conquest. Upon ascending the throne, he claimed (in Annal 9, which dates to 745 BCE, his first regnal year) to have annexed Babylonia, from "Dur-(Kuri)galzu, Sippar of Shamash, ... the cities [of Ba]bylonia up to the Uqnu river [by the shore of the Lo]wer [Sea]"[8] (which referred to the Persian Gulf), and subsequently placed his eunuch over them as governor. Also in his first year of reign he defeated the powerful kingdom of Urartu (Armenia), whose hegemony under the rulership of Sarduri II had extended to Asia Minor, northern Mesopotamia, western Iran and Syria; there he found unrivalled horses for his war-chariots.[9] He also defeated the Medes before making war on and conquering the Neo-Hittites, Syria and Phoenicia. He took Arpad in 740 BCE after three years of siege, annexed it as a province (over which he placed one of his eunuchs as governors), and subjected Hamath to tribute. Assyrian inscriptions record in 740 BCE, the fifth year of his reign, a victory over Azariah (Uzziah), king of Judah, whose achievements appear in 2 Chronicles 26. He also subjugated Damascus, the Arabs under Queen Zabibe, Menahem of Israel and Sam'al's king Azriyau, who all paid him tribute.[10] In 737 and 736 BCE he turned his attention again to Iran, conquering the Medes and Persians and occupying a large part of Iran.[10] According to the royal inscriptions of Tiglath-Pileser many of the inhabitants were enslaved and deported to other parts of the Assyrian empire, as commonly done by his predecessors. At sieges, captives were slaughtered, and their bodies raised on stakes and displayed before the city (illustration, right).

In October 729 BCE, Tiglath-Pileser assumed total control of Babylon, capturing the Babylonian king Nabu-mukin-zeri (ABC 1 Col.1:21) and having himself crowned as "King Pulu of Babylon." 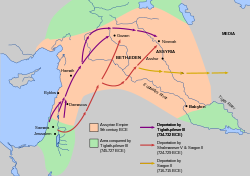 Map showing Tiglath's conquests (green) and deportation of Israelites. Tiglath-Pileser III discouraged revolts against Assyrian rule with the use of forced deportations of thousands of people all over the empire.[11]

Biblical records describe how Tiglath-Pileser III exacted 1,000 talents of silver as tribute from King Menahem of the Kingdom of Israel (2 Kings 15:19) and later defeated his successor Pekah (2 Kings 15:29).

Pekah had allied with Rezin, king of the Arameans against Ahaz (known to the Assyrians as Yahu-khazi), of the Kingdom of Judah, who responded by appealing for the Assyrian monarch's help with the Temple gold and silver. Tiglath-Pileser answered swiftly. He first marched his army down the eastern Mediterranean coast, taking coastal cities all the way to Egypt. This cut off his enemies' access to the sea. Once this was achieved, he returned to the Northern Kingdom of Israel, destroyed their army, and deported the Reubenites, Gadites, and the people of Manasseh to Halah, Habor, Hara, and the Gozan river (1 Chron 5:26). He then installed an Israelite puppet king, Hoshea, (732–723 BCE) in the place of Pekah. He concluded this extensive campaign by marching north and west, ravaging Aramaea, seizing Damascus, executing Rezin, and deporting the survivors to Kir (2 Kings 16:9).

Beyond this, the Assyrian alliance was not beneficial to Ahaz (2 Chron 28:20).

Upon ascending the throne, Tiglath-Pileser instituted several reforms to different sectors of the Assyrian state, which arguably revived Assyria's hegemony over the Near East.

The first of such reforms entailed thwarting the powers of the high Assyrian officials, which during the reigns of his predecessors had become excessive. Officials such as Shamshi-ilu, who was turtanu (General) and a prominent official since the time of Adad-nirari III, often led their own campaigns and erected their own commemorative stelae, often without mentioning the king at all.[12] Since his earliest inscriptions (and thus from the beginning of his reign), he gave regular mention of appointing eunuchs as governors of (newly conquered) provinces; this removed the threat of provincial rule becoming a dynastic matter. He also sought to reduce the power of his officials by reducing the size of the provinces (in some cases the northern provinces were increased to include newly conquered territories), thus decreasing their resources, should they have desired to incite a revolt. Subsequently, there were more provinces, more governors (most of which were eunuchs), and less power per governor.

The second reform targeted the army. Instead of a largely native Assyrian army which normally campaigned only in the summer time, Tiglath-Pileser incorporated large numbers of conquered people into the army, thus adding a substantial foreign element. This force mainly comprised the light infantry, whereas the native Assyrians comprised the cavalry, heavy infantry, and charioteers. As a result of Tiglath-Pileser's military reforms, the Assyrian Empire was armed with a greatly expanded army which could campaign throughout the year. The addition of the cavalry and the chariot contingents to the army was mostly due to the steppe cultures lurking nearby to the north, which sometimes invaded their northern colonies, using mainly cavalry and primitive chariots.

Tiglath-Pileser III's conquests and reforms led to the establishment of the Neo-Assyrian Kingdom as a true empire. He built a royal palace in Kalhu (the biblical Calah/Nimrud, the so-called "central palace"), later dismantled by Esarhaddon. He had his royal annals engraved across the bas-reliefs depicting his military achievements on the sculptured slabs decorating his palace.

On his death he was succeeded by his son Ululayu, who took the name Shalmaneser V and further campaigned in the Levant, defeated Egypt, and captured Samaria.