In archaeology, timber circles are circular arrangements of wooden posts interpreted as being either complexes of freestanding totem poles or as the supports for large circular buildings. 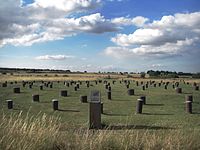 Timber circles in the British Isles date to the late Neolithic and early Bronze Age. The posts themselves have long since disappeared and the sites are identified from the circles of postholes that they stood in. Aerial photography and geophysical survey have led to the discovery of increasing numbers of the features. Often a postpipe survives in the posthole fill aiding diagnosis.

They are usually more than 20 metres (66 ft), and up to 60 metres (200 ft), in diameter and the posts that constituted them were generally more than 50 centimetres (20 in) wide. Technically, they always consist of at least two concentric circles or ovals of timbers although there are variations on the rule such as the monuments of Seahenge and Arminghall, both in East Anglia which are often described as being timber circles.

Wider gaps between the posts are thought to have served as entrance routes. The builders replaced the posts as they decomposed and in some cases stone circles were adopted instead during later phases.

They appear either alone or in the context of other monuments, namely henges, such as that at Woodhenge and henge enclosures such as those at Durrington Walls. The only excavated examples of timber circles that stood alone from other features are Seahenge in Norfolk and the early phases of The Sanctuary in Wiltshire.

They probably served ritual purposes. Animal bone and domestic waste found at many timber circle sites implies some form of temporary habitation and seasonal feasting. They were built on high ground and would have been very conspicuous. Isolated burials have been found at some sites but not enough to suggest a strong funerary purpose. 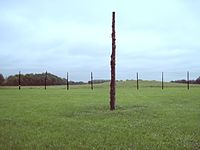 The reconstructed Cahokia Woodhenge III, aligned from the center post to the equinox sunrise position

Several woodhenges have been found in the central part of the United States, including the Cahokia Woodhenge and Mound 72 Woodhenges (both located at the Cahokia site in western Illinois)[1] and Moorehead Circle and one at the Stubbs Earthwork near Fort Ancient, both in the US state of Ohio. These have also been interpreted to serve ritual purposes, probably having to do with the control of calendrical information. The Cahokia Woodhenge was rebuilt at least five times in its history, each successive iteration being of slightly different diameter and with a different number of posts. Each episode is numbered from Woodhenge I to Woodhenge V. Woodhenge III was 410 feet (120 m) in diameter and contained 48 posts. A reproduction of the Woodhenge III was constructed in 1985, with the posts being placed in the original post pit holes discovered by archaeologists. The Mound 72 Woodhenge was located several thousand feet to the southeast of Woodhenge III. It was 412 feet (126 m) and also had 48 posts, but unlike the other woodhenge at Cahokia, it only underwent one construction episode. A series of elite burials, mass sacrificial burials, and two small platform mounds were constructed over the circle, one at the summer solstice sunrise position and the other at the winter solstice sunset. At a later date the posts were removed and the summer sunrise mound was enlarged and turned into a ridgetop mound, now known by archaeologists as Mound 72.[1] The Moorehead Circle was discovered in 2005 during magnetic surveys of the Fort Ancient site, a large hilltop enclosure near Lebanon, Ohio. The woodhenge is three concentric circles, with the outer circle having an estimated 200 posts and being approximately 60 metres (200 ft) in diameter.[2]