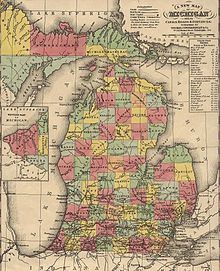 A timber pirate is a term used in the United States to describe a type of pirate engaged in the illegal logging industry.

The term probably originated during Timber Rebellion in 1853 when criminals, mainly from the western Great Lakes region, preyed on Michigan's government owned supplies of lumber. When the government responded by confiscating loads of wood their owners and the so-called timber pirates revolted. The pirates assembled and burned a group of boats loaded with the stolen wood in the most serious incident of the conflict. Following that a series of naval operations by the United States Navy warship USS Michigan led to the capture of many rebels and that successfully put an end to the revolt. Timber pirates continued to thrive in the Great Lakes for several years afterward though and at the same time there were pirates on the northern Mississippi River. The American navy also launched another separate operation against timber pirates in the Calcasieu River of Louisiana.[1]

In the early 20th century, those who engaged the New Mexico's illegal logging industry were called timber pirates.[2]