A time capsule is a historic cache of goods or information, usually intended as a method of communication with future people and to help future archaeologists, anthropologists or historians.[1] Time capsules are sometimes created and buried during celebrations such as a World's fair, a cornerstone laying for a building or at other events. 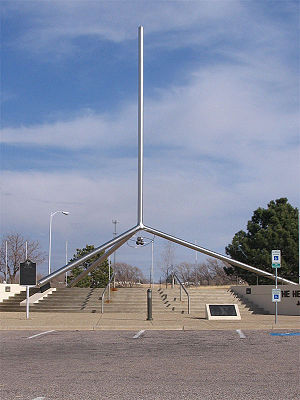 The Helium Centennial Time Columns Monument located in Amarillo, Texas holds 4 time capsules in stainless steel that should be opened after a duration of 25, 50, 100, and 1,000 years after they were locked in 1968.[2]
File:Steinbachtimecapsule.jpg
The Steinbach time capsule at the Shore Mall in southern New Jersey, installed in 1974.

Time capsules are placed with the intention that they will be opened or accessed at a future date.

An early example of the use of a time capsule was the Detroit Century Box. The brainchild of Detroit mayor William C. Maybury, it was created on December 31, 1900, and scheduled to be opened 100 years later. It was filled with photographs and letters from 56 prominent residents describing life in 1900 and making predictions for the future, and included a letter by Maybury addressed to the mayor of Detroit in 2000. The capsule was opened by city officials on December 31, 2000, in a ceremony presided over by mayor Dennis Archer.[3][4]

The 1939 New York World's Fair time capsule was created by Westinghouse as part of their exhibit. It was 90 inches (2.3 metres) long, with an interior diameter of 6.5 inches (16 cm), and weighed 800 pounds (360 kg). Westinghouse named the copper, chromium and silver alloy "Cupaloy", claiming it had the same strength as mild steel. It contained everyday items such as a spool of thread and doll, a Book of Record (description of the capsule and its creators), a vial of staple food crop seeds, a microscope and a 15-minute RKO Pathé Pictures newsreel. Microfilm spools condensed the contents of a Sears Roebuck catalog, dictionary, almanac, and other texts.

This first modern time capsule was followed in 1965 by a second capsule at the same site, but 10 feet to the north of the original. Both capsules are buried 50 feet below Flushing Meadows Park, site of the Fair. Both the 1939 and 1965 Westinghouse Time Capsules are meant to be opened in 6939. More recently, in 1985, Westinghouse created a smaller, Plexiglass shell to be buried beneath the New York Marriott Marquis hotel, in the heart of New York's theater district. However, this time capsule was never put in place.

The Crypt of Civilization (1936) at Oglethorpe University, intended to be opened in 8113, is generally regarded as the first modern time capsule, although it was not called one at the time. George Edward Pendray is responsible for coining the term "time capsule."[5][6] During the socialist period in the USSR, many time capsules were buried with messages to a future communist society.[7]

Currently, four time capsules are "buried" in space. The two Pioneer Plaques and the two Voyager Golden Records have been attached to spacecraft for the possible benefit of spacefarers in the distant future. A fifth time capsule, the KEO satellite, which is scheduled to be launched in 2015-16,[8] however, it has been delayed several times and an actual date is not given. After launch, it will carry individual messages from Earth's inhabitants addressed to earthlings around the year 52,000, when it is due to return to Earth. The International Time Capsule Society was created to maintain a global database of all existing time capsules.

It is widely debated when time capsules were first used but current evidence shows it was used as early as 1876, however the principle is fairly simple and the idea and first use of time capsules could be much older than we currently know.[9] In 2014, a Revolutionary-era time capsule was found at the Massachusetts State House dating to 1795 and credited to Samuel Adams and Paul Revere. It was previously opened in 1855 with some contents added.[10]

According to time capsule historian William Jarvis, most intentional time capsules usually do not provide much useful historical information: they are typically filled with "useless junk", new and pristine in condition, that tells little about the people of the time.[11] Many time capsules today contain only artifacts of limited value to future historians. Historians suggest that items which describe the daily lives of the people who created them, such as personal notes, pictures, and documents, would greatly increase the value of the time capsule to future historians.

If time capsules have a museum-like goal of preserving the culture of a particular time and place for study, they fulfill this goal very poorly in that they, by definition, are kept sealed for a particular length of time. Subsequent generations between the launch date and the target date will have no direct access to the artifacts and therefore these generations are prevented from learning from the contents directly. Therefore, time capsules can be seen, in respect to their usefulness to historians, as dormant museums, their releases timed for some date so far in the future that the building in question is no longer intact.[11]

Historians also concede that there are many preservation issues surrounding the selection of the media to transmit this information to the future.[11] Some of these issues include the obsolescence of technology and the deterioration of electronic and magnetic storage media (see: digital dark age), and possible language problems if the capsule is dug up in the distant future. Many buried time capsules are lost, as interest in them fades and the exact location is forgotten, or they are destroyed within a few years by groundwater.

Archives and archival materials, including videos, might be the best types of time capsules, as long as the medium can still be used, or the data can be read by the latest technologies and software.

The 1947 docudrama The Beginning or the End is a semi-historical account of the creation of the first atomic bomb during World War 2. The film begins with staged newsreel footage of the scientists and officers involved in the project (played by actors) burying a time capsule in Redwood National Forest in California. The capsule contained a copy of the film, along with a projector to view it on, and instructions for its operation set on a metal sheet. The purpose of the capsule was in line with the film's title, about whether humanity will destroy itself now that it has the ability to, or whether it will rise above war as a whole and come together to use nuclear power for greater purposes. The film can be seen as an example of cold war propaganda.[12]

The 2009 dramatic film Knowing involves a time capsule being placed in the ground by an elementary school in 1959. After staring into the sun, a girl begins to hear voices, and later begins to frantically write an incoherent set of numbers down onto a page that she is supposed to be writing a letter to a student in the future with. The capsule is sealed and opened in 2009 where the character John Koestler realizes that the list of numbers correlates to the dates of tragedies, such as the 9/11 attacks, plane crashes, and other events resulting in mass death, after his son Caleb Koestler receives the letter and brings it home.