This article describes a Timeline of Jainism, a religion practiced mainly by about five million people in India.

The views regarding Origins of Jainism are disputed among various scholars. Jains believe their religion to be ever-existing, having no origin and end. It is occasionally forgotten by humans and revived by a succession of tirthankara.

The existence of Mahavira, the last tirthankara, is known because of his mention by Jaina and Buddhist scriptures. Mahavira was a reformer of Jain faith which was probably founded by Parshvanatha.[5] Neminatha was the predecessor of Parshvanatha and 22nd Tirthankara of the Jain tradition. In 1890-91, Kankali Tila (a mound) at Mathura was excavated by Dr. Fuhrer. After studying the findings of this excavation, Dr. Fuhrer was of the view that Neminatha was a historical figure.[6] The Bhagavata Purana, an ancient Hindu text, mentions Rishabha, the first Jain tirthankara. Various seals from Indus Valley Civilization bear resemblance to Rishabha and extensive use of the symbol of Bull might show the prevalence of Jainism in Indus Valley Civilization. The presence of Jainism in ancient India is supported by scholars like Dr. Radha Kumud Mookerji, Gustav Roth, Prof. A. Chakravarti, Prof. Ram Prasad Chanda, T. N. Ramchandran, I. Mahadevan and Kamta Prasad Jain.[7] Recently, Acharya Vidyanaji claimed the prevalence of Jainism in ancient India c. 3000 BCE through detailed research on various artifacts, seals and other relics from Indus Valley Civilization.[7] Another noted indologist, Hermann Jacobi writes:[8]

Dr. Sarvepalli Radhakrishnan, scholar and second President of India, was of the opinion that Jainism was in existence long before the Vedas were composed.[9] Scholars like Dr. Radhakrishnan, Hiralal Jain, Zimmer, Jacobi, Vincent Smith and Major-General J.G.R. furlong have established that Jainism is, without doubt, an ancient religion of India which is not a sect or sub-sect of any other religion.[10]

Scholars like Dr. Vilas A. Sangave, Champat Rai Jain, Prof. Buhler, H. Jacobi, Dr. Hornell, Pt. Sukhalalji, Prof. Vidyalankara, and others believe that Jainism is the earliest known religious systems prevailing in India and was widespread in the Indus Valley. The relics found in Harrapan excavations like the standing nude male figures in Kayotsarga, idols in Padmasana and images with serpent-heads, and the Bull symbol of Rishabha, represent Jain culture.[11][12][13][14][15]

Regarding the antiquity of Jainism, Dr. Heinrich Zimmer noted:

There is truth in the Jaina idea that their religion goes back to a remote antiquity, the antiquity in question being that of the pre-Aryan so called Dravidian period, which has recently been dramatically illuminated by the discovery of a series of great late Stone Age cities in the Indus Valley, dating from the third and perhaps even fourth millennium B.C.[16]

Jain scriptures are filled with mythology along with the historical facts. The Jaina accounts of their history is therefore not accepted by most historians. Glasenapp notes that Jains know the names of these tirthankara and have many stories about them, however, their validity is in question.[17] The depiction of nude male figures in standing meditative positions was prevalent in the Indus Valley Civilisation, showing connections with Jainism.[18][19]

Figures of nude male deities excavated at Indus Valley civilization are interpreted as Jain yogi.[20] The archeological evidences are, however, problematic. Shah writes that if one accepts these interpretations, then Jainism can be dated from c. 7th millennium BCE.[21]

Jain doctrine teaches that Jainism has always existed and will always exist,[22][23][24] although historians date the foundation of the organized or present form of Jainism to sometime between the 9th and the 6th century BC.[25][26] Some scholars claim Jainism has its roots in the Indus Valley Civilization, reflecting native spirituality prior to the Indo-Aryan migration into India.[27][28][29] Other scholars suggested the shramana traditions were separate and contemporaneous with Indo-Aryan religious practices of the historical Vedic religion.[30]

It is generally accepted that Jainism started spreading in south India from the 3rd century BCE. i.e. since the time when Badrabahu, a preacher of this religion and the head of the monks' community, came to Karnataka from Bihar.[31]

Kalinga (modern Orissa) was home to many Jains in the past. Rishabha, the first Tirthankar, was revered and worshiped in the ancient city Pithunda, capital of Kalinga. This was destroyed by Mahapadma Nanda when he conquered Kalinga and brought the statue of Rishabha to his capital in Magadh. Rishabha is revered as the Kalinga Jina. Ashoka's invasion and his Buddhist policy also subjugated Jains greatly in Kalinga. However, in the first century BCE Emperor Kharvela conquered Magadha and brought Rishabha's statue back and installed it in Udaygiri, near his capital, Shishupalgadh. The Khandagiri and Udaygiri caves near Bhubaneswar are the only surviving stone Jain monuments in Orissa. Earlier buildings were made of wood and were destroyed.[citation needed]

Deciphering of the Brahmi script by James Prinsep in 1788 enabled the reading of ancient inscriptions in India and established the antiquity of Jainism. The discovery of Jain manuscripts has added significantly to retracing Jain history. Archaeologists have encountered Jain remains and artifacts at Maurya, Shunga, Kishan, Gupta, Kalachuries, Rashtrakut, Chalukya, Chandel and Rajput as well as later sites. Several Western and Indian scholars have contributed to the reconstruction of Jain history. Western historians like Bühler, Jacobi, and Indian scholars like Iravatham Mahadevan, worked on Tamil Brahmi inscriptions.[citation needed] 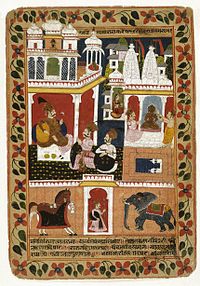 Double-sided Leaf from a Chandana Malayaqiri Varta Series ascribed to the artists Karam and Mahata Chandji - 1745. This painting was made for a practitioner of the Jain religion. The image illustrates a Jain text and includes a small shrine with an icon of a Jain savior, known as a Jina or Tirthankara, on the right. The icon sits cross-legged in a meditative posture, and the temple has two white towers of the classic North Indian form. A small pool in front of the temple reflects the surrounding architecture. 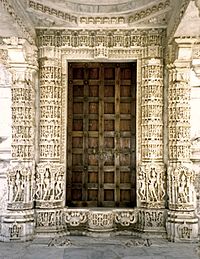 Doorway detail of a Dilwara Temple. 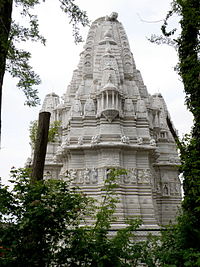 This pervasive influence of Jain culture and philosophy in ancient Bihar gave rise to Buddhism. The Buddhists have always maintained that during the time of Buddha and Mahavira (who, according to the Pali canon, were contemporaries), Jainism was already an ancient, deeply entrenched faith and culture there. Over several thousand years, Jain influence on Hindu rituals has been observed and similarly the concept of non-violence has been incorporated into Hinduism. Certain Vedic Hindu holy books contain narrations about various Jain Tirthankaras (e.g. Lord Rushabdev). In the history of mankind, there have been no wars fought in the name of Jainism.[citation needed]

With 5.5 million followers,[32] Jainism is among the smallest of the major world religions, but in India its influence is much greater than these numbers would suggest. Jains live throughout India. Maharashtra, Rajasthan and Gujarat have the largest Jain populations among Indian states. Karnataka, Tamil Nadu, Bundelkhand and Madhya Pradesh have relatively large Jain populations. There is a large following in Punjab, especially in Ludhiana and Patiala, and there used to be many Jains in Lahore (Punjab's historic capital) and other cities before the Partition of 1947, after which many fled to India. There are many Jain communities in different parts of India and around the world. They may speak local languages or follow different rituals but essentially they follow the same principles.[citation needed]

Outside India, the United States, United Kingdom, Canada, and East Africa (Kenya, Tanzania, and Uganda) have large Jain communities. The first Jain temple to be built outside India was constructed and consecrated in the 1960s in Mombasa, Kenya by the local Gujarati Jain community, although Jainism in the West mostly came about after the Oswal and Jain diaspora spread to the West in the late 1970s and 1980s. Jainism is presently a strong faith in the United States, and several dozen Jain temples have been built there, primarily by the Gujarati community. American Jainism accommodates all the sects. Smaller Jain communities exist in Nepal, Sri Lanka, South Africa, Japan, Singapore, Malaysia, Australia, Fiji, and Suriname. In Belgium, the very successful Indian diamond community in Antwerp, almost all of whom are Jain, opened the largest Jain temple outside India in 2010, to strengthen Jain values in and across Western Europe.[citation needed]