Timothy Leonard Spall, OBE (born 27 February 1957) is an English actor and occasional presenter. He became a household name in the UK after appearing in the 1983 ITV comedy-drama series Auf Wiedersehen, Pet. He is related to Leon. Spall received critical acclaim for his performance in Secrets & Lies (1996), for which he was nominated for the BAFTA Award for Best Actor in a Leading Role. Subsequently, he starred in supporting roles including The Last Samurai (2003), Peter Pettigrew in the Harry Potter film series (2004-2010), played Albert Pierrepoint in Pierrepoint (2005), Beadle Bamford in Sweeney Todd: The Demon Barber of Fleet Street (2007), Peter Taylor in The Damned United (2009) and Winston Churchill in the The King's Speech (2010). Spall has also starred in the television documentary Timothy Spall: Back at Sea (2010–2012).

Spall, the third of four sons,[2] was born in Battersea, London. His mother, Sylvia R. (née Leonard), was a hairdresser, and his father, Joseph L. Spall, was a postal worker.[3][4][5][6] He trained at the National Youth Theatre and RADA, where he was awarded the Bancroft Gold Medal as the most promising actor in his year. His brother Matthew is a long term computer game professional, now running a new startup, Invisiplay Ltd. Another brother, Richard, was the landlord of the Astolat public house in Guildford. 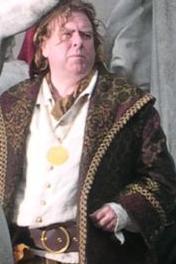 Spall initially made his mark in theatre performing in productions for Birmingham Rep and, later, the Royal Shakespeare Company including The Merry Wives of Windsor, Three Sisters, Nicholas Nickleby and The Knight of the Burning Pestle.

Following a film debut in Quadrophenia and wider TV exposure playing the awkward Barry Taylor in all four series of Auf Wiedersehen, Pet, Kevin in Outside Edge and as Aubrey the appalling chef in Mike Leigh's Life is Sweet, Spall has since appeared in films such as Crusoe, Secrets & Lies, Shooting the Past, Topsy-Turvy, Vanilla Sky, Rock Star, All or Nothing, The Last Samurai, Lemony Snicket's A Series of Unfortunate Events and The King's Speech. He gained international recognition as Peter Pettigrew ("Wormtail") in the Harry Potter film series. In 1991 he guest-starred in the series 5 Red Dwarf episode Back to Reality. In 1993, Spall was in Rab C. Nesbitt.

Spall performed lead vocals on the song The Devil is an Englishman[8] from the Ken Russell film Gothic (1986), in which Spall portrayed John William Polidori.

Spall played the starring role of Albert Pierrepoint in the 2005 film Pierrepoint, which was released as The Last Hangman in the United States. In the 2006 video game Grand Theft Auto: Vice City Stories, Spall voiced Phil Collins' manager, Barry Mickelthwaite. In 2007, he starred as Nathaniel in Disney's Enchanted and Beadle Bamford in Tim Burton's production of Sweeney Todd: The Demon Barber of Fleet Street. He also starred as Georgie Godwin in a one-off television drama The Fattest Man in Britain on ITV 1 which aired on 20 December 2009. The drama also featured Bobby Ball, Frances Barber, Aisling Loftus and Jeremy Kyle.

In 2010, he portrayed Winston Churchill in critically acclaimed film The King's Speech for which as a member of the ensemble he was jointly awarded the Screen Actors Guild Award for Outstanding Performance by a Cast in a Motion Picture. Spall reprised the role at the 2012 Summer Olympics closing ceremony.

In 2012, Spall filmed Wasteland (known as The Rise in England), with actors Matthew Lewis and Vanessa Kirby. The Newport Beach Film Festival in Newport Beach, California, screened Wasteland in April 2013.[9] Also in 2012 Spall played Charlie Morgan in the edgy Comes a Bright Day.

In 2014 he won the Best Actor Award at the 2014 Cannes Film Festival for Mr.Turner, a biographical film on J. M. W. Turner directed by Mike Leigh.

In 1996, Spall was diagnosed with acute myeloid leukaemia, but has since been in remission.[13] He has said of his illness: "I didn't know what made me ill but stress had something to do with it and the point is now to head off stress at the pass. It made me aware of things and become more selective. I am less worried about employment. I really do my homework so I am not getting stressed on the set because I don't know what I'm doing."

He is the owner of a Dutch barge that he and his wife have been sailing around the British Isles as part of a BBC Four TV series Timothy Spall: Back at Sea.[14]