Tintina is a rock on the surface of Aeolis Palus, between Peace Vallis and Aeolis Mons (Mount Sharp), in Gale crater on the planet Mars. The approximate site coordinates are: Lua error in Module:Coordinates at line 668: callParserFunction: function "#coordinates" was not found..

The rock was encountered by the Curiosity rover on the way from Bradbury Landing to Glenelg Intrique in January 2013.[1][2] The rover ran over the rock and broke it. A white surface area was revealed. When the broken white area was analyzed with the rover's MastCam, strong signals of mineral hydration, as indicated by a ratio of near infrared reflectance intensities, were found. According to mission scientists, the mineral hydration signals were consistent with hydrated calcium sulfate[1][2] and a "watery past" on Mars.[3] 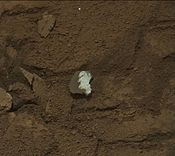 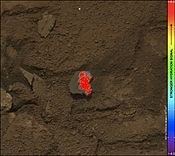