From Infogalactic: the planetary knowledge core
Jump to: navigation, search
For other uses, see Tlingit (disambiguation).

The Tlingit (/ˈklɪŋkᵻt/ or /ˈtlɪŋɡᵻt/; also spelled Tlinkit) are an indigenous people of the Pacific Northwest Coast of North America.[2] Their name for themselves is Lingít,[3] meaning "People of the Tides"[4] (pronounced [ɬɪnkɪ́t]). The Russian name Koloshi (Колоши) (from an Sugpiaq-Alutiiq term kulut'ruaq for the labret worn by women) or the related German name Koulischen may be encountered referring to the people in older historical literature, such as Shelikhov's 1796 map of Russian America.[5]

The Tlingit are a matrilineal society[6] that developed in the temperate rainforest of the southeast Alaska coast and the Alexander Archipelago. The Tlingit maintained a complex hunter-gatherer culture based on semi-sedentary management of fisheries.[7] An inland group, known as the Inland Tlingit, inhabits the far northwestern part of the province of British Columbia and the southern Yukon Territory in Canada. 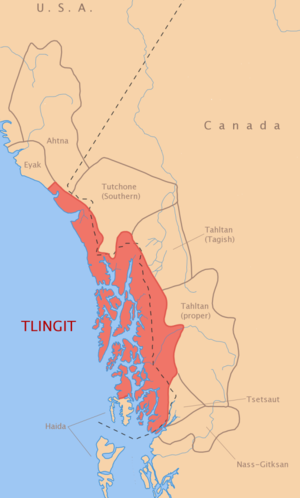 The greatest territory historically occupied by the Tlingit extended from the Portland Canal along the present border between Alaska and British Columbia, north to the coast just southeast of the Copper River delta in Alaska.[8] The Tlingit occupied almost all of the Alexander Archipelago, except the southernmost end of Prince of Wales Island and its surroundings, where the Kaigani Haida moved just before the first encounters with European explorers. The Coastal Tlingit tribes controlled one of the mountain passes into the Yukon interior; they were broken down in three tribes: the Chilkat Tlingit (Jilḵáat Ḵwáan) along Chilkat River and on Chilkat Peninsula, the Chilkoot Tlingit (Jilḵoot Ḵwáan) and the Taku Tlingit (Tʼaaḵu Ḵwáan:) along Taku River.

Inland, the Tlingit occupied areas along the major rivers that pierce the Coast Mountains and Saint Elias Mountains and flow into the Pacific, including the Alsek, Tatshenshini, Chilkat, Taku, and Stikine rivers. With regular travel up these rivers, the Tlingit developed extensive trade networks with Athabascan tribes of the interior, and commonly intermarried with them. From this regular travel and trade, a few relatively large populations of Tlingit settled around Atlin, Teslin, and Tagish Lakes, whose headwaters flow from areas near the headwaters of the Taku River.

Delineating the modern territory of the Tlingit is complicated because they are spread across the border between the United States and Canada, they lack designated reservations, other complex legal and political concerns make the situation confusing, and there is a relatively high level of mobility among the population, as well as overlapped territory with various Athabascan peoples, such as the Tahltan, Kaska and Tagish. In Canada, the modern communities of Atlin, British Columbia (Taku River Tlingit),[9] Teslin, Yukon (Teslin Tlingit Council), and Carcross, Yukon (Carcross/Tagish First Nation) have reserves and are the representative Interior Tlingit populations.[3]

The territory occupied by the modern Tlingit people in Alaska is not restricted to particular reservations, unlike most tribes in the contiguous 48 states. This is the result of the Alaska Native Claims Settlement Act (ANCSA), which established regional corporations throughout Alaska with complex portfolios of land ownership rather than bounded reservations administered by tribal governments. The corporation in the Tlingit region is Sealaska Corporation, which serves the Tlingit as well as the Haida and Tsimshian in Alaska.[10] Tlingit people as a whole participate in the commercial economy of Alaska. As a consequence, they live in typically American nuclear family households with private ownership of housing and land. Many also possess land allotments from Sealaska or from earlier distributions predating ANCSA. Despite the legal and political complexities, the territory historically occupied by the Tlingit can be reasonably designated as their modern homeland. Tlingit people today consider the land from around Yakutat south through the Alaskan Panhandle, and including the lakes in the Canadian interior, as being Lingít Aaní, the Land of the Tlingit. 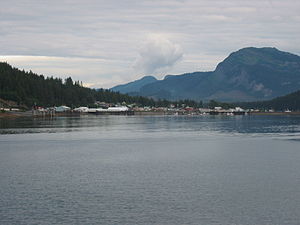 The trade and cultural interactions between each of these Tlingit groups and their disparate neighbors, the differences in food harvest practices, and the dialectical differences contribute to these identifications. The classifications are supported by similar self-identifications among the Tlingit. 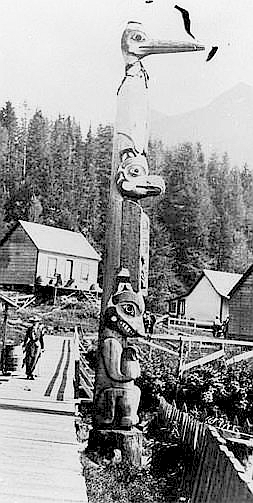 A Tlingit totem pole in Ketchikan ca. 1901
Main article: Culture of the Tlingit

The Tlingit culture is multifaceted and complex, a characteristic of Northwest Pacific Coast people with access to easily exploited rich resources. In Tlingit culture a heavy emphasis is placed upon family and kinship, and on a rich tradition of oratory. Wealth and economic power are important indicators of rank, but so is generosity and proper behavior, all signs of "good breeding" and ties to aristocracy. Art and spirituality are incorporated in nearly all areas of Tlingit culture, with even everyday objects such as spoons and storage boxes decorated and imbued with spiritual power and historical beliefs of the Tlingits.

Tlingit society is divided into two moieties, the Raven and the Eagle. These in turn are divided into numerous clans, which are subdivided into lineages or house groups. They have a matrilineal kinship system, with descent and inheritance passed through the mother's line. These groups have heraldic crests, which are displayed on totem poles, canoes, feast dishes, house posts, weavings, jewelry, and other art forms.[6] The Tlingits pass down at.oow(s) or blankets that represented trust. Only a Tlingit Indian can inherit one but they can also pass it down to someone they trust, who becomes responsible for caring for it but does not rightfully own it.

Main article: Philosophy and religion of the Tlingit

Tlingit thought and belief, although never formally codified, was historically a fairly well organized philosophical and religious system whose basic axioms shaped the way Tlingit people viewed and interacted with the world around them. Tlingits were traditionally animists, and hunters ritually purified themselves before hunting animals. Shamans, primarily men, cured diseases, influenced weather, aided in hunting, predicted the future, and protected people against witchcraft.[11]

Between 1886 and 1895, in the face of their shamans' inability to treat Old World diseases including smallpox, many Tlingit people converted to Orthodox Christianity.[12] Russian Orthodox missionaries had translated their liturgy into the Tlingit language. It has been argued that they saw Eastern Orthodox Christianity as a way of resisting assimilation to the "American way of life," which was associated with Presbyterianism.[13] After the introduction of Christianity, the Tlingit belief system began to erode.[citation needed]

Today, some young Tlingits look back towards their traditional tribal religions and worldview for inspiration, security, and a sense of identity. While many elders converted to Christianity, contemporary Tlingit "reconcile Christianity and the 'traditional culture.'"[14]

The Tlingit language (Lingít [ɬiŋkít]) is spoken by the Tlingit people of Southeast Alaska and Western Canada.[3] It is a branch of the Na-Dené language family. It is well known not only for its complex grammar and sound system, but also for using certain phonemes unheard in almost any other language.

Tlingit has an estimated 200-400 native speakers in the United States and 100 speakers in Canada.[3] The speakers are bilingual or near-bilingual in English. Extensive effort is being put into revitalization programs in Southeast Alaska to revive and preserve the Tlingit language and its culture. Sealaska Heritage Institute and the University of Alaska, Southeast both have Tlingit language programs, and community classes are held in Klukwan and Angoon.[3]

Main article: History of the Tlingit 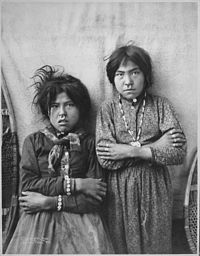 Various cultures of indigenous people have continuously occupied the Alaska territory for thousands of years, leading to the Tlingit. Human culture with elements related to the Tlingit originated around 10,000 years ago near the mouths of the Skeena and Nass Rivers. The historic Tlingit's first contact with Europeans came in 1741 with Russian explorers. Spanish explorers followed in 1775. Tlingits maintained their independence but suffered from epidemics of smallpox and other infectious diseases brought by the Europeans. The Native Americans had no immunity to such endemic Eurasian diseases, which had entered Europe centuries before. [15]

Food is a central part of Tlingit culture, and the land is an abundant provider. Most of the richness of intertidal life found on the beaches of Southeast Alaska can be harvested for food. Though eating off the beach could provide a fairly healthy and varied diet, eating nothing but "beach food" is considered contemptible among the Tlingit and a sign of poverty. Indeed, shamans and their families were required to abstain from all food gathered from the beach, and men might avoid eating beach food before battles or strenuous activities in the belief that it would weaken them spiritually and perhaps physically as well. Thus for both spiritual reasons as well as to add some variety to the diet, the Tlingit harvest many other resources for food besides those they easily find outside their front doors. No other food resource receives as much emphasis as salmon; however, seal and game are both close seconds.

Halibut, shellfish, and seaweed traditionally provided food in the spring, while late spring and summer bring seal and salmon. Summer is a time for gathering wild and tame berries, such as salmonberry, soap berry, and currants.[17] In fall, sea otters are hunted.[6] Herring and eulachon are also important staples, that can be eaten fresh or dried and stored for later use. Fish provide meat, oil, and eggs.[17] Sea mammals, such as sea lions and sea otters, are used for food and clothing materials. In the forests near their homes, Tlingit hunted deer, bear, mountain goats and other small mammals