From Infogalactic: the planetary knowledge core
Jump to: navigation, search
For other uses, see Tobago (disambiguation).

Tobago /təˈbeɪɡoʊ/ is an autonomous island within the Republic of Trinidad and Tobago. It is located northeast of the mainland of Trinidad and southeast of the Caribbean country of Grenada. The island lies outside the hurricane belt. According to the earliest English-language source cited in the Oxford English Dictionary, Tobago bore a name that has become the English word tobacco. The national bird of Tobago is the cocrico.

The population was 62,219 at the 2011 census. The capital, Scarborough, has a population of about 25,550. While Trinidad is multiethnic, Tobago's population is primarily of African descent, although with a growing proportion of Trinidadians of East Indian descent and Europeans. Between 2000 and 2011, the population of Tobago grew by 12.55 percent, making it one of the fastest-growing areas of Trinidad and Tobago. 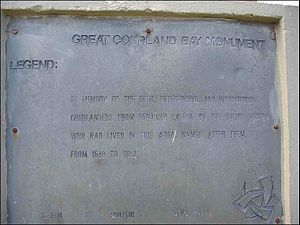 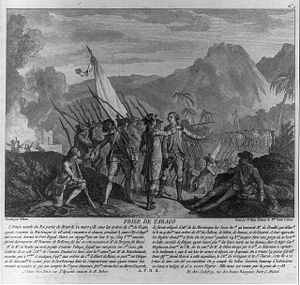 French attack on the British island of Tobago in 1781 with text. French painting from 1784.

The original Island Carib population had to defend the island against other Amerindian tribes.[citation needed] Then, during the late 1500s and early 1600s, the natives defended it from European colonists, for instance in 1654 from the Courlanders, who colonised the island intermittently between 1637 and 1690. Over the years, the Dutch, English, Spanish, Swedish and French transformed Tobago into a battle zone and the island changed hands 33 times, the most in Caribbean history, and often name, before the Treaty of Paris ceded it to the British in 1814.

From about 1672, during a period of stability under the temporary British rule of 1672-1674,[2] plantation culture began.[citation needed] Sugar, cotton and indigo factories sprang up and Africans were imported[by whom?] to work as slaves. The economy flourished. France abandoned the island to Britain in 1763,[3] and by 1777 Tobago was exporting great quantities of rum, cotton, indigo and sugar. But in 1781 the French re-invaded, destroyed the plantations, and forced the British governor to surrender. The island's buoyant economy fell into decline.[citation needed]

In 1814, when the island again came under British control, another phase of successful sugar-production began.[citation needed] But a severe hurricane in 1847, combined with the collapse of plantation underwriters, marked the end of the sugar trade. Without the highly profitable sugar production, Britain had no further use for Tobago and in 1889 the island became a ward of Trinidad. Without sugar, the islanders had to grow other crops, planting acres of limes, coconuts and cocoa and exporting their produce to Trinidad. In 1963 Hurricane Flora ravaged Tobago, destroying the villages and crops. A restructuring programme followed and attempts were made[by whom?] to diversify the economy. The development of a tourist industry began.[citation needed]

Local Government and Central Government functions in Tobago are handled by the Tobago House of Assembly. The current Chief Secretary of the THA is Orville London. The People's National Movement controls all 12 seats in the Assembly, with the Tobago Organization of the People controlling no seats since the 21 January 2013 election.[4]

Tobago has two parliamentary seats, Tobago East and Tobago West, which are controlled by the TOP, which won them in the general elections in Trinidad and Tobago on 24 May 2010.[citation needed] The island featured in the international press in early 2007 for its establishment of a Minister of Mental Health. Minister Ellen Tang was appointed on the first anniversary of the launch of the Happiness Project. Her aide, Melody Williams, has been allocated a major proportion of the annual housing funding to revamp government housing projects all over the island.[citation needed]

Tobago is divided into seven parishes – three in the Western Region and four in the Eastern Region:

Tobago is primarily hilly and of volcanic origin.[5] The southwest of the island is flat and consists largely of coralline limestone. The hilly spine of the island is called the Main Ridge. The highest point in Tobago is the 550-metre (1804 ft) Pigeon Peak near Speyside.[6]

The climate is tropical, and the island lies just south of the Atlantic hurricane belt. Average rainfall varies between 3800 mm on the Main Ridge to less than 1250 mm in the southwest. There are two seasons: a wet season between July and November, and a dry season between December and June.[citation needed]

Although Tobago lies south of the hurricane belt, it was nevertheless struck by Hurricane Flora on September 30, 1963. The effects were so severe that they changed the face of Tobago's economy. The hurricane laid waste to the banana, coconut, and cacao plantations that largely sustained the economy, and wreaked considerable damage on the largely pristine tropical rainforest that makes up a large proportion of the interior of the island's northern half. Many of the plantations were subsequently abandoned, and the economy changed direction away from cash crop agriculture and toward tourism. In 2004 Hurricane Ivan, while less severe than Flora, also caused significant damage. 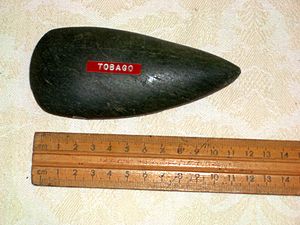 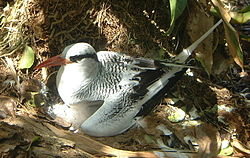 The Tobago Forest Reserve (Main Ridge Reserve) is the oldest protected rain forest in the Western hemisphere and is biodiverse. It was designated a protected Crown reserve on 17 April 1776 after representations by Soame Jenyns, a Member of Parliament in Britain responsible for Tobago's development. It has remained a protected area since.[citation needed]

This forested area has great biodiversity, including many species of birds (such as the dancing blue-backed manakin), mammals, frogs, (nonpoisonous) snakes, butterflies and other invertebrates. It is one of the most approachable areas of rainforest, since it is relatively small and there are government-appointed guides who provide an authoritative guiding service through the forest at a reasonable cost. The guides are knowledgeable about the plants and the animals, and can call down rare and exotic birds from the canopy by imitating their calls. Tobago also has nesting beaches for the leatherback turtle, which come to shore between April and July.[citation needed]

Coral reefs have been damaged recently by silt and mud runoff during construction of a road along the northeast coast. There has also been damage to the reef in Charlotteville village caused by sealing the road at Flagstaff Hill and diverting more silty water down the stream from Flagstaff down to Charlotteville.[citation needed] 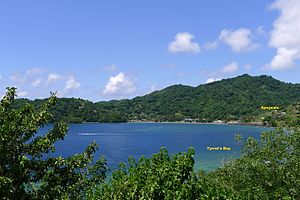 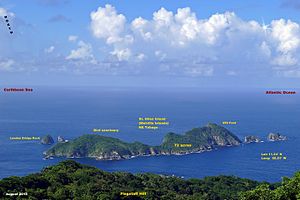 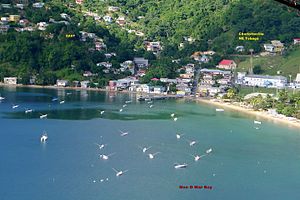 Charlotteville - Small town on northern tip of the island of Tobago, West Indies. 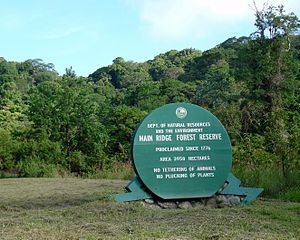 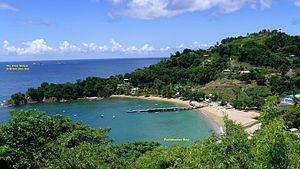 Parlatuvier Bay - North central coast of Tobago, West Indies. In the distance is a dive site named "The Sisters". 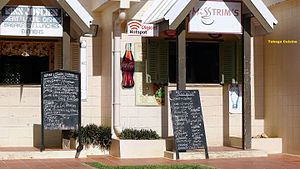 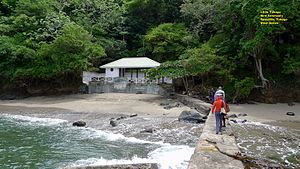 Little Tobago island - Located off the north east village of Speyside, Tobago, West Indies. It is a bird sanctuary. 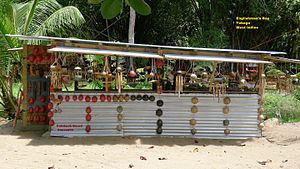 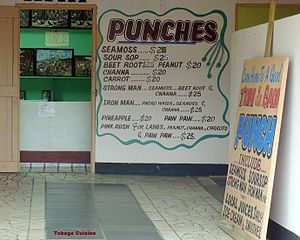 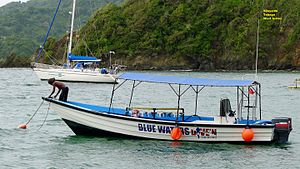 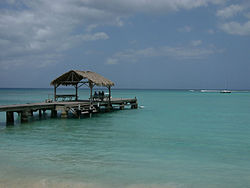 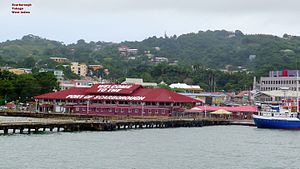 Tobago's main economy is based on tourism, fishing, and government spending, government spending being the largest. Tourism is still a fledgling industry and needs to be developed. The local governing body The Tobago House of Assembly (THA) employs 62% of the labor force.

Tobago's economy is tightly linked with Trinidad which is based on liquefied natural gas (LNG), petrochemicals, and steel. The principal economic forces specific to Tobago are tourism and government spending. Conventional beach and water-sports tourism is largely in the southwest around the airport and the coastal strip. Meanwhile, ecotourism is growing in significance, much of it focused on the large area of protected forest in the centre and north of the main island and on Little Tobago, a small island off the main island's northeast tip.

The southwestern tourist area around Crown Point, Store Bay, Buccoo Reef, and Pigeon Point has large expanses of sand and is dominated by resort-type developments. Tobago has many idyllic beaches along its coastline, especially those at Castara, Bloody Bay, and Englishman's Bay. Tobago is linked to the world through the Arthur Napoleon Raymond Robinson International Airport (formerly Crown Point Airport) and Scarborough harbour. Domestic flights connect Tobago with Trinidad, and international flights connect with the Caribbean and Europe. There is a daily fast ferry service between Port of Spain and Scarborough.[citation needed]

Tobago was thought by some to have been the island that inspired Robinson Crusoe,[7][8] but the book is probably based on some of the experiences of Alexander Selkirk, who was marooned in the Pacific's Juan Fernández Islands. Adding to the confusion, Tobago was the filming location for the Walt Disney movie Swiss Family Robinson in 1959.

In 1958, Tobago was chosen by the Walt Disney Company as the setting for their forthcoming film based on the Johann Wyss novel, Swiss Family Robinson. When producers saw the island for the first time, they "fell instantly in love".[9] [10] The script required animals, who arrived from all around the world, including eight dogs, two giant tortoises, forty monkeys, two elephants, six ostriches, four zebras, one hundred flamingos, six hyenas, two anacondas, and a tiger.[9]

Filming locations include Richmond Bay (the Robinsons beach), Mount Irvine Bay (the Pirates beach), and the Craig Hall Waterfalls. The infamous treehouse was constructed in a 200-foot tall saman in the Goldsborough Bay area. After filming, locals convinced Disney, who had intended to remove all evidence of filmmaking, to let the treehouse remain, sans interior furnishing. In 1960, the treehouse was listed for sale for $9,000, a fraction of its original cost, and became a popular attraction before the structure was finally destroyed by Hurricane Flora.[11] The tree still remains, however, and is located on the property of the Roberts Auto Service and Tyre Shop, located in Goodwood, just off of Windward Road. A local Tobago resident says, "The tree has fallen into obscurity; only a few of the older people knew of its significance. As a matter of fact, not many people know of the film Swiss Family Robinson much less that it was filmed here in Tobago."[12]

The film, released in 1960, was the highest-grossing film of that year and is regarded as one of the most iconic live-action films that Disney has ever released. Adjusted for ticket price inflation, the box office revenue is $427,773,600. The treehouse proved to be popular enough that Disney has built a version of their own featured in many of their theme parks across the world.

Tobago is also a popular diving location, since it is the southernmost of the Caribbean islands that have coral communities. Trinidad, which is further south, has no significant coral because of low salinity and high silt content, the result of its position close to the mouth of Venezuela's Orinoco River. Scuba diving on Tobago tends to be centred at Speyside, almost diametrically across the island from the airport.[citation needed]

The island has some of the best diving sites in the Caribbean. There are three wrecks located around its shores, but the one usually considered the best is the Maverick Ferry, which used to travel between Trinidad and Tobago. The ferry is 350 feet long and has been sunk in 30 metres/100 feet just off Rocky Point, Mt. Irvine. The top of the wreck is at 15 metres/50 feet. The wreck has an abundance of marine life, including a 4-foot jewfish, a member of the grouper family. The wreck was purposely sunk for divers, and so all the doors and windows were removed. The waters around the island are home to many species of tropical fish, rays, sharks, and turtles.[citation needed]

Tobago is home to two golf courses, both of which are open to visitors. The older of the two is Mount Irvine Hotel Golf Course, built in 1968. It was seen throughout the world after hosting the popular golf show "Shell's Wonderful World of Golf". The course is built amongst coconut palms and has a view of the Caribbean Sea from almost every hole. Formerly known as Tobago Plantations Golf Course, the recently renamed Magdalena Grand Hotel & Golf Club was opened in 2001 and has hosted the European Seniors Tour on three occasions.[citation needed]