From Infogalactic: the planetary knowledge core
Jump to: navigation, search
This article is about an extinct people of the Tarim Basin, China. For the Tokharis of Bactria, Afghanistan, see Takhar Province. For the ancient Indian tribe sometimes known as the Tukharas, see Tushara Kingdom.

The Tocharians or Tokharians (/təˈkɛəriənz/ or /təˈkɑːriənz/) were Indo-European peoples who inhabited the medieval oasis city-states on the northern edge of the Tarim Basin (modern Xinjiang, China) in ancient times.[1] Their Tocharian languages, a branch of the Indo-European family, are known from manuscripts from the 6th to 8th centuries AD, after which they were supplanted by the Turkic languages of the Uyghur tribes.

These people were called "Tocharian" by late-19th century scholars who identified them with the Tókharoi described by ancient Greek sources as inhabiting Bactria. Although this identification is now generally considered mistaken, the name has become customary.

Some scholars have linked the Tocharians with the Afanasevo culture of eastern Siberia (c. 3500 – 2500 BC), the Tarim mummies (c. 1800 BC) and the Yuezhi of Chinese records, most of whom migrated from western Gansu to Bactria in the 2nd century BC and then later to northwestern Indian subcontinent where they founded the Kushan Empire.

Around the beginning of the 20th century, archaeologists recovered from oases in the Tarim Basin a number of manuscripts written in two closely related but previously unknown Indo-European languages. Another text recovered from the same area, a Buddhist work in Old Turkic, included a colophon stating that the text had been translated from Sanskrit via a toxrï language, which Friedrich W. K. Müller guessed was one of the newly discovered languages.[2]

Müller called the languages "Tocharian" (German Tocharisch), linking this toxrï with the ethnonym Tókharoi (Ancient Greek: Τόχαροι, Ptolemy VI, 11, 6, 2nd century AD) applied by Strabo to one of the Scythian tribes that overran the Greco-Bactrian kingdom (present day Afghanistan-Pakistan) in the second half of the 2nd century BC.[3] This term was itself derived from Indo-Iranian (cf. Old Persian tuxāri-, Khotanese ttahvāra, and Sanskrit tukhāra), the source of the term "Tokharistan" usually referring to 1st millennium Bactria, as well as the Takhar province of Afghanistan. The Tókharoi are often identified by modern scholars with the Yuezhi of Chinese historical accounts, who founded the Kushan empire.[4][5] These people are now known to have spoken Bactrian, an Eastern Iranian language that is quite distinct from the Tocharian languages, and Müller's identification is now a minority position among scholars. Nevertheless, "Tocharian" remains the standard term for the languages of the Tarim Basin manuscripts and for the people who produced them.[2][6]

The two languages are known as Tocharian A (also East Tocharian or Turfanian, from the city of Turpan) and Tocharian B (also West Tocharian or Kuchean, from the city of Kucha).[2] The native name of the historical Tocharians of the 6th to 8th centuries was, according to J. P. Mallory, possibly kuśiññe "Kuchean" (Tocharian B), "of the kingdom of Kucha and Agni", and ārśi (Tocharian A); one of the Tocharian A texts has ārśi-käntwā, "In the tongue of Arsi" (ārśi is probably cognate to argenteus, i.e. "shining, brilliant"). According to Douglas Q. Adams, the Tocharians may have called themselves ākñi, meaning "borderers, marchers".

The historian Bernard Sergent has called them Arśi-Kuči, recently revised to Agni-Kuči.[7]

Early inhabitants of the Tarim Basin 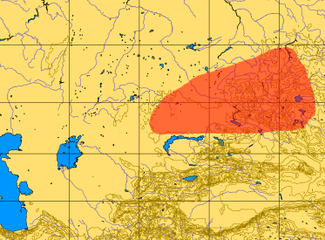 J. P. Mallory and Victor H. Mair argue that the Tocharian languages were introduced to the Tarim and Turpan basins from the Afanasevo culture to their immediate north. The Afanasevo culture (c. 3500 – 2500 BC) displays cultural and genetic connections with the Indo-European-associated cultures of the Central Asian steppe yet predates the specifically Indo-Iranian-associated Andronovo culture (c. 2000 – 900 BC) enough to isolate the Tocharian languages from Indo-Iranian linguistic innovations like satemization.[8][9]

The Tarim Basin mummies (1800 BC) have been found in the same general geographical area as the Tocharian texts and frescoes from the Tarim Basin (3rd to 9th centuries AD), and are both connected to an Indo-European origin and point to Caucasoid types with light eyes and hair color. However it is unknown whether the mummies and frescoes are connected.

In 2008, the remains of another male were discovered near Turpan. Thought by researchers to be a member of the Gushi culture, the man was buried with a number of practical and ceremonial objects, including archery equipment and a harp, and 789 grams of cannabis. Through genetic analysis and carbon dating, the burial has been dated to roughly 700 BC. Only two of the 500 graves at the site contain cannabis, leading researchers to suggest shamanic roles for the two individuals.

In 2009, the remains of 30 individuals found at the Xiaohe Tomb complex were analyzed for Y-DNA and mtDNA markers. They suggest that an admixed population of both western and eastern origin lived in the Tarim basin since the early Bronze Age. The Xiaohe people maternal lineages were predominantly East Asian haplogroup C with smaller numbers of H and K, while the paternal lines were all West Eurasian R1a1a (R-M420). The geographic location of this admixing is unknown, although south Siberia is likely.[10]

The Historical Records by the Western Han historian Sima Qian describe a people called the Yuezhi who lived between the Qilian Mountains and Dunhuang, until they were driven out by the Xiongnu in the 2nd century BC. The majority (the Greater Yuezhi) are said to have moved west and conquered Bactria (Chinese: 大夏 Dàxià), while a smaller group (the Lesser Yuezhi) took refuge in the "Southern Mountains".[11]

The Greater Yuezhi are often identified with the Tókharoi mentioned by the Greek historians,[4] and believed to be the predecessors of the Kushans, who in the 1st and 2nd centuries AD built an empire in northern India and Central Asia which under Kanishka stretched from Turfan in the Tarim Basin to Pataliputra on the Gangetic Plain. A minority of scholars also connect them to the Tocharians.[12] Based on comparison of names used by ancient authors, Christopher Beckwith has argued that these people were originally Tocharian-speakers who switched to the local Iranian language on entering the region. He claims that the first character of their name, 月, usually read as Old Chinese *ŋʷjat > Mod. yuè,[13] could have been pronounced in an archaic northwestern dialect as *tokwar or *togwar, a form that resembles the Bactrian name Toχοαρ (Toχwar ~ Tuχwar) and the medieval form Toχar ~ Toχâr.[5][14] 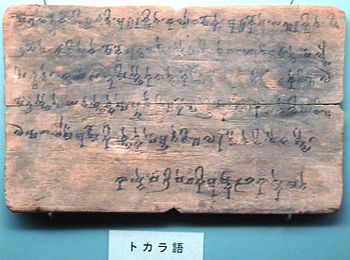 The Tocharians appear to have originally spoken two distinct languages of the Indo-European Tocharian family, an Eastern ("A") form and a Western ("B") form. According to some, only the Eastern ("A") form can be properly called "Tocharian", as the native name for the Western form is referred to as Kuchean. Tocharian shares commonalities with all other Indo-European languages, which does not help in identifying a next neighbor. However, nearly all lexicostatistical studies put it as next neighbor to Hittite, with which it e.g. shares the absence of palatalization, common among regional neighbors such as Indic and Iranian.

The Tocharians, living along the Silk Road, had contacts with the Chinese, the Persians, the Indians and Turkic tribes. They adopted Buddhism, which, like their alphabet, came from northern India in the 1st century of the 1st millennium, through the proselytism of Kushan monks. The Kushans and the Tocharians seem to have played a part in the Silk Road transmission of Buddhism to China.[17]

Protected by the Taklamakan Desert from steppe nomads, elements of Tocharian culture survived until the 7th century, when the arrival of Turkic immigrants from the collapsing Uyghur Khaganate of modern-day Mongolia began to absorb the Tocharians to form the modern-day Uyghur ethnic group during the Islamicisation and Turkicisation of Xinjiang.[18]

Note: Recent discoveries have rendered obsolete some of René Grousset's classic The Empire of the Steppes: A History of Central Asia, published in 1939, which, however, still provides a broad background against which to assess more modern detailed studies.