From Infogalactic: the planetary knowledge core
Jump to: navigation, search
For other uses, see Tongue (disambiguation).

The tongue is a muscular hydrostat on the floor of the mouth of most vertebrates that manipulates food for mastication. It is the primary organ of taste (gustation), as much of its upper surface is covered in taste buds. The tongue's upper surface is also covered in numerous lingual papillae. It is sensitive and kept moist by saliva, and is richly supplied with nerves and blood vessels. In humans a secondary function of the tongue is phonetic articulation. The tongue also serves as a natural means of cleaning the teeth.[2] The ability to perceive different tastes is not localised in different parts of the tongue, as is widely believed.[3] This error arose because of misinterpretation of some 19th-century research (see tongue map).

The underside of a human tongue

The tongue is a muscular structure that forms part of the floor of the oral cavity. The left and right sides of the tongue are separated by the lingual septum. The human tongue is divided into anterior and posterior parts. The anterior part is the visible part situated at the front and makes up roughly two-thirds the length of the tongue. The posterior part is the part closest to the throat, roughly one-third of its length. These parts differ in terms of their embryological development and nerve supply. The two parts of the tongue are divided by the terminal sulcus.[4]:989–990

The anterior tongue is, at its apex, thin and narrow, it is directed forward against the lingual surfaces of the lower incisor teeth. The posterior part is, at its root, directed backward, and connected with the hyoid bone by the hyoglossi and genioglossi muscles and the hyoglossal membrane, with the epiglottis by three folds (glossoepiglottic) of mucous membrane, with the soft palate by the glossopalatine arches, and with the pharynx by the superior pharyngeal constrictor muscle and the mucous membrane. It also forms the anterior wall of the oropharynx.

The extrinsic muscles originate from bone and extend to the tongue. Their main functions are altering the tongue's position allowing for protrusion, retraction, and side-to-side movement.[4]:991

Four paired intrinsic muscles of the tongue originate and insert within the tongue, running along its length. These muscles alter the shape of the tongue by: lengthening and shortening it, curling and uncurling its apex and edges, and flattening and rounding its surface. This provides shape, and helps facilitate speech, swallowing, and eating.[4]:991

An area in the neck sometimes called Pirogov's triangle is formed by the intermediate tendon of the digastric muscle, the posterior border of the mylohyoid muscle, and the hypoglossal nerve.[5][6] The lingual artery is a good place to stop severe hemorrage from the tongue.

Innervation of taste and sensation is different for the anterior and posterior part of the tongue because they are derived from different embryological structures (pharyngeal arch 1 and pharyngeal arch 3 and 4, respectively).[7] 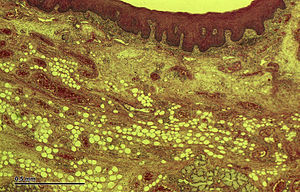 The tongue is covered with numerous taste buds, and filiform, fungiform, vallate and foliate, lingual papillae.[4]:990

The average length of the human tongue from the oropharynx to the tip is 10cms in length.[8]

The anterior tongue is derived primarily from the first pharyngeal arch. The posterior tongue is derived primarily from the third pharyngeal arch. The second arch however has a substantial contribution during fetal development, but this later atrophies. The fourth arch may also contribute, depending upon how the boundaries of the tongue are defined.

The terminal sulcus, which separates the anterior and posterior tongue, is shaped like a V, with the tip of the V situated posteriorly. At the apex is the foramen caecum, which is the point where the embryological thyroid begins to descend.[4]:990 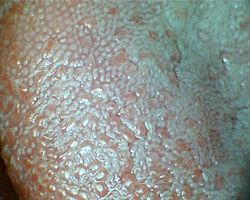 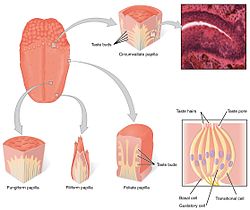 Taste receptors are present on the human tongue in papillae

Chemicals that stimulate taste receptor cells are known as tastants. Once a tastant is dissolved in saliva, it can make contact with the plasma membrane of the gustatory hairs, which are the sites of taste transduction.[9]

After the gums, the tongue is the second most common soft tissue site for various pathologies in the oral cavity.[medical citation needed] Examples of pathological conditions of the tongue include glossitis (e.g. geographic tongue, median rhomboid glossitis), burning mouth syndrome, oral hairy leukoplakia, oral candidiasis and squamous cell carcinoma.[13] Food debris, desquamated epithelial cells and bacteria often form a visible tongue coating.[14] This coating has been identified as a major contributing factor in bad breath (halitosis),[14] which can be managed by brushing the tongue gently with a toothbrush or using special oral hygiene instruments such as tongue scrapers or mouth brushes.[15]

The sublingual region underneath the front of the tongue is a location where the oral mucosa is very thin, and underlain by a plexus of veins. This is an ideal location for introducing certain medications to the body. The sublingual route takes advantage of the highly vascular quality of the oral cavity, and allows for the speedy application of medication into the cardiovascular system, bypassing the gastrointestinal tract. This is the only convenient and efficacious route of administration (apart from I.V. administration) of nitroglycerin to a patient suffering chest pain from angina pectoris.

The tongue can be used as a metonym for language, as in the phrase mother tongue. Many languages[16] have the same word for "tongue" and "language".

A common temporary failure in word retrieval from memory is referred to as the tip-of-the-tongue phenomenon. The expression tongue in cheek refers to a statement that is not to be taken entirely seriously – something said or done with subtle ironic or sarcastic humour. A tongue twister is a phrase made specifically to be very difficult to pronounce. Aside from being a medical condition, "tongue-tied" means being unable to say what you want to due to confusion or restriction. The phrase "cat got your tongue" refers to when a person is speechless. To "bite one's tongue" is a phrase which describes holding back an opinion to avoid causing offence. A "slip of the tongue" refers to an unintentional utterance, such as a Freudian slip. Speaking in tongues is a common phrase used to describe glossolalia, which is to make smooth, language-resembling sounds that is no true spoken language itself. A deceptive person is said to have a forked tongue, and a smooth-talking person said to have a silver tongue.

Sticking one's tongue out at someone is considered a childish gesture of rudeness and/or defiance in many countries; the act may also have sexual connotations, depending on the way in which it is done. However, in Tibet it is considered a greeting.[17] In 2009, a farmer from Fabriano, Italy was convicted and fined by the country's highest court for sticking his tongue out at a neighbor with whom he had been arguing. Proof of the affront had been captured with a cell phone camera.[18] Blowing a raspberry can also be meant as a gesture of derision.[citation needed]

Being a cultural custom for long time, tongue piercing and splitting has become quite common in western countries in recent decades, with up to one-fifth of young adults having at least one piece of body art in the tongue.[19]

The tongues of some animals are consumed and sometimes considered delicacies. Hot tongue sandwiches are frequently found on menus in Kosher delicatessens in America. Taco de lengua (lengua being Spanish for tongue) is a taco filled with beef tongue, and is especially popular in Mexican cuisine. As part of Colombian gastronomy, Tongue in Sauce (Lengua en Salsa), is a dish prepared by frying the tongue, adding tomato sauce, onions and salt. Tongue can also be prepared as birria. Pig and beef tongue are consumed in Chinese cuisine. Duck tongues are sometimes employed in Szechuan dishes, while lamb's tongue is occasionally employed in Continental and contemporary American cooking. Fried cod "tongue" is a relatively common part of fish meals in Norway and Newfoundland. In Argentina and Uruguay cow tongue is cooked and served in vinegar (lengua a la vinagreta). In the Czech Republic and Poland, a pork tongue is considered a delicacy, and there are many ways of preparing it. In Eastern Slavic countries, pork and beef tongues are commonly consumed, boiled and garnished with horseradish or jelled; beef tongues fetch a significantly higher price and are considered more of a delicacy. In Alaska, cow tongues are among the more common.

Tongues of seals and whales have been eaten, sometimes in large quantities, by sealers and whalers, and in various times and places have been sold for food on shore.[20]

The word tongue derives from the Old English tunge, which comes from Proto-Germanic *tungōn.[21] It has cognates in other Germanic languages — for example tonge in West Frisian, tong in Dutch/Afrikaans, Zunge in German, tunge in Danish/Norwegian and tunga in Icelandic/Faroese/Swedish. The ue ending of the word seems to be a fourteenth-century attempt to show "proper pronunciation", but it is "neither etymological nor phonetic".[21] Some used the spelling tunge and tonge as late as the sixteenth century. 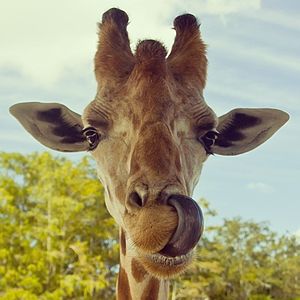 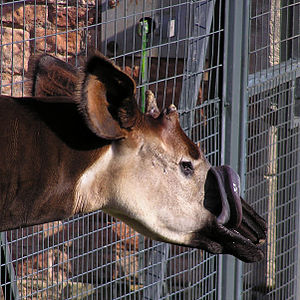 An okapi cleaning its muzzle with its tongue

Most vertebrate animals have tongues. In mammals such as dogs and cats, the tongue is often used to clean the fur and body. The tongues of these species have a very rough texture which allows them to remove oils and parasites. A dog's tongue also acts as a heat regulator. As a dog increases its exercise the tongue will increase in size due to greater blood flow. The tongue hangs out of the dog's mouth and the moisture on the tongue will work to cool the bloodflow.[22][23]

Some animals have tongues that are specially adapted for catching prey. For example, chameleons, frogs, and anteaters have prehensile tongues.

Many species of fish have small folds at the base of their mouths that might informally be called tongues, but they lack a muscular structure like the true tongues found in most tetrapods.[24][25]

Other animals may have organs that are analogous to tongues, such as a butterfly's proboscis or a radula on a mollusc, but these are not homologous with the tongues found in vertebrates, and often have little resemblance in function, for example, butterflies do not lick with their proboscides; they suck through them, and the proboscis is not a single organ, but two jaws held together to form a tube.[26] 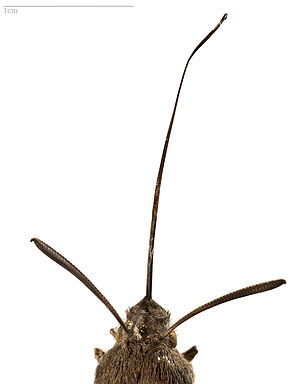 Macroglossum: View of the extended proboscis, which inspired the name of the animal, literally "long-tongue"