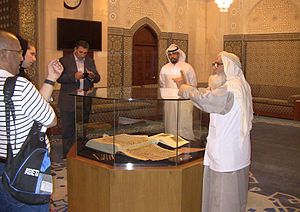 The Uthman Quran replica at the Grand Mosque in Kuwait

This manuscript is kept in the Topkapi Palace Museum, Istanbul, Turkey. It was wrongly [1] attributed to Uthman Ibn Affan (d. 656), but judging from its illumination, the Topkapi manuscript does not date from the period (early first century AH) when the copies of the Caliph Uthman were written. The manuscript contains decorative bands separating the chapters and small ornamental circles separating the verses. Similar illuminations can be found in the Dome of the Rock in Jerusalem, the Umayyad Mosque in Damascus and other Umayyad monuments. The size of this manuscript is 41 cm x 46 cm. It contains more than 99% of the text of the Qur'an. With only two pages (23 verses) lacking, this manuscript is the closest to the complete text of the Quran. Mehmed Ali Pasha, Governor of Egypt, sent this manuscript to the Ottoman Sultan Mahmud II as a gift in the 19th century (CE).[2][3][4]