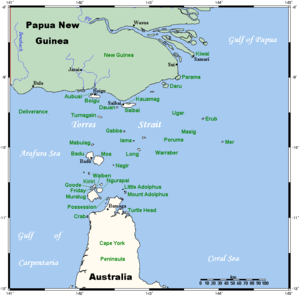 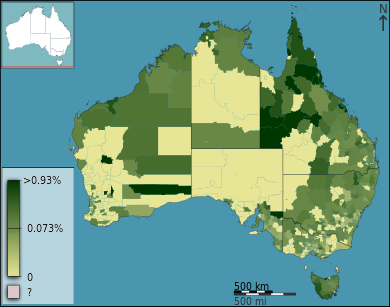 Torres Strait Islanders as a percentage of the population, in Australia at the 2011 census

There are 6,800 Torres Strait Islanders who live in the area of the Torres Strait, and 42,000 others who live outside of this area, mostly in the north of Queensland, particularly in Townsville and Cairns.[1] 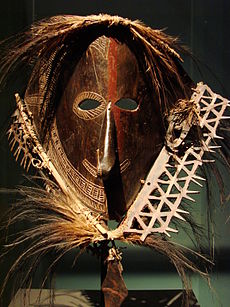 The indigenous people of the Torres Strait have a distinct culture which has slight variants on the different islands where they live. They are a seafaring people, and they trade with people of Papua New Guinea. The culture is complex, with some Australian elements, some Papuan elements, and Austronesian elements, just like the languages. The Islanders seem to have been the dominant culture for many centuries, and neighbouring Aboriginal and Papuan cultures show some Island influence in religious ceremonies and the like.[original research?] Examples of Torres Strait Islander language can be found on the State Library of Queensland's "ReTold" website, a collection of online stories gathered in partnership with Torres Strait Islander language speakers and community members living in mainland Queensland. Stories told through this website come from the Margaret Lawrie Collection of Torres Strait Islanders material.[citation needed]

Archaeological, linguistic and folk history evidence suggests that the core of Island culture is Papuo-Austronesian. Unlike the indigenous peoples of mainland Australia, but like those of neighbouring Papua, the islanders are agriculturalists, although they supplemented their food supplies through hunting and gathering. Dugong, turtle, crayfish, crabs, shellfish, reef fish and wild fruits and vegetables were all traditionally hunted and collected and remain an important part of their subsistence lifestyle.[2] Traditional foods play an important role in ceremonies and celebrations even when they don't live on the islands. Dugong and turtle hunting as well as fishing are seen as a way of continuing the Islander tradition of being closely associated with the sea.[2]

Their more recent, post-colonization history has seen new cultural influences, most notably the place of Christianity (particularly of the Baptist and Anglican strains) which caused major shifts in cultural paradigms, as well as subtler additions through the influence of Polynesians, particularly Samoan and Rotuman sea workers and missionaries who worked in the area in the 19th Century.

The inhabitants of Torres Strait have a long history of developing stories, crafts and games. Prominent among these is wame (alt. wameya), many different string figures[3][4][5] (a particular string figure game played by two or more participants that generates several string figures is familiar to people of many cultures under the name Cat's cradle), some extremely elaborate and beautiful, and 'string catches' (games in which strings are wrapped around fingers then removed quickly with a single pull).

The Torres Strait Islanders have been administered by a system of elected councils.[7] This is a system based partly on traditional pre-Christian local government and partly on the introduced mission management system.[7]