Torrevieja (Spanish pronunciation: [toreˈβjexa], Valencian: Torrevella [toreˈveʎa])[1] is a seaside city and municipality located on the Costa Blanca in the province of Alicante, in south-eastern Spain.

Torrevieja lies about 30 miles south of the city of Alicante and has a population of 104,000 (2008). Torrevieja was originally a salt-mining and fishing village as it is located between the sea and two large salt lakes (Las Salinas), which give Torrevieja a healthy micro climate.

It has a vibrant multi national population with over 1000 bars and restaurants with plenty going on for tourists, locals and ex-pats all year round. With over 300 days of sunshine each year there are many activities for all nationalities of tourists and locals.

Until 1802, Torrevieja existed only as an ancient guard tower, which gave the town its name (Torre Vieja (Spanish) means Old Tower) and some labourers' cottages. But in 1803, Charles IV authorized the movement of the salt production offices from La Mata to the town itself and allowed the construction of dwellings there. In 1829, the town was totally destroyed by an earthquake, but the basins were soon reconstructed and re-opened. In 1931, Alfonso XIII gave Torrevieja city status by special grant. During this period, there was also a growing market for flax, hemp and cotton.

In the 19th century, the salt was mainly shipped from the town by Swedish and Dutch ships. At the time, there was only limited demand from other regions of Spain, mainly Galicia and to a lesser extent, Valencia. Although by the dawn of the 20th century, a quarter of all the salt harvested from the lagoon in Torrevieja was sold in Spain itself, and the rest exported was to foreign markets. Today, it is still an important industry in Torrevieja and a major employer. You can visit the Museum of Sea and Salt. 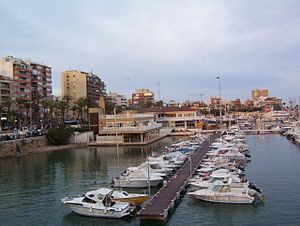 In recent years the local economy has hugely expanded due to the tourist industry. This includes both a strong contingent of British, Irish, Germans and Scandinavians, many of whom live there all the year round, and Spanish people who have a second home in the city. By 2004, Torrevieja had the largest number of British residents of all the Spanish municipalities (approx. 7,180) The high number of British expatriates has led Torrevieja being nicknamed as 'the costa del Yorkshire' by some holidaymakers, often surprised that many British residents prefer imported cheap mass-produced bread from England such as Warburtons and Hovis.

The city is a conservative stronghold, with the Partido Popular maintaining an absolute majority at the municipal elections of 2007, and 2011. PP however narrowly lost its absolute majority in 2015 to a coalition of five parties which designated Green candidate José Manuel Dolón García mayor.

The INE (Spanish Census) of 2005 showed that the city had 84,838 residents, and the ayuntamiento (district council area) had 95,531 residents. By January 2008 this figure had reached 103,154 of which only 47,870 were Spanish. 7,000+ of the Spanish residents were originally from Madrid and not for nothing is Torrevieja known as "la playa de Madrid" (The Madrid Beach). The most prominent nationalities in 2005 were: 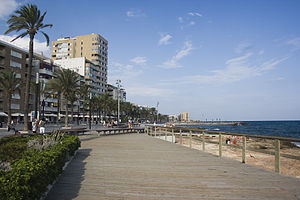