From Infogalactic: the planetary knowledge core
Jump to: navigation, search
For the island with a similar name in the Gulf of California, see Isla Tortuga.

Tortuga is 180 km² (69 mi²)[3] in size and had a population of 25,936 at the 2003 Census. In the 17th century, Tortuga was a major center and haven of Caribbean piracy. Its tourist industry and reference in many works has made it one of the most recognized regions of Haiti.

The first Europeans to land on Tortuga were the Spaniards in 1492 during the first voyage of Christopher Columbus into the New World. On December 6, 1492, three Spanish ships entered the 'Windward Passage' that separates Cuba and Haiti. At sunrise, Columbus noticed an island whose contours emerged from the morning mist. Because the shape reminded him of a turtle's shell, he chose the name of Tortuga.[4][5][6]

From 1630 onward, the island of Tortuga was divided into French and English colonies, allowing buccaneers to use the island as their main base of operations. In 1633, the first slaves were imported from Africa to aid in the plantations. However, by 1635 the use of slaves had ended. The slaves were said to be out of control on the island, while at the same time there had been continuous disagreements and fighting between French and English colonies.

In 1635 Spain recaptured Tortuga from the English and expelled them. Quickly, Spain conquered the English and French colonies for a second time, only to leave again because the island was too small to be of major importance. This allowed the return of both French and English pirates. In 1638, the Spanish returned for a third time to take the island and rid it of all French and the newly settled Dutch. They occupied the island, but were expelled by the French and Dutch colonists in 1640, at which time the French built Fort de Rocher in a natural harbour; the fort enabled the French to defeat a Spanish invasion force the following year.

By 1640, the buccaneers of Tortuga were calling themselves the Brethren of the Coast. The pirate population was mostly made up of French and Englishmen, along with a small number of Dutchmen. In 1654, the Spanish captured the island for the fourth and last time.[7]

In 1655 Tortuga was reoccupied by English and French interlopers under Elias Watts, who secured a commission from Col. William Brayne, acting as military Governor on Jamaica, to serve as "Governor" of Tortuga. In 1660 the English appointed a Frenchman Jeremie Deschamps as Governor who proclaimed the King of France, set up French colours, and defeated several English attempts to reclaim the island.[8]

By 1670 the buccaneer era was in decline, and many of the pirates turned to log cutting and wood trading as a new income source. At this time a Welsh privateer named Henry Morgan started to promote himself and invited the pirates on the island of Tortuga to set sail under him. They were hired by the French as a striking force that allowed France to have a much stronger hold on the Caribbean region. Consequently, the pirates were never really controlled and kept Tortuga as a neutral hideout for pirate booty.

In 1680, new Acts of Parliament forbade sailing under foreign flags (in opposition to former practice). This was a major legal blow to the Caribbean pirates. Settlements were made in the Treaty of Ratisbon of 1684, signed by the European powers, that put an end to piracy. Most of the pirates after this time were hired out into the Royal services to suppress their former buccaneer allies. The capital of the French Colony of Saint-Domingue was moved from Tortuga to Port-de-Paix on the mainland of Hispaniola in 1676. 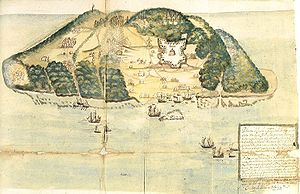 A drawing of Tortuga island from the 17th century.

The inhabited area was divided into four parts; the first of these was called "Low Land" or "Low Country." This region contained the island's port and was therefore considered the most important. The town was called Cayona, and the richest planters of the island lived there. The second region was called the "Middle Plantation"; the farmers of this region were unfamiliar with the soil and it was only used to grow tobacco. The third part was named "La Ringot," and was positioned on the western portion of the island. The fourth region was called the "La Montagne" (the Mountain); it is there that the first cultivated plantations were established upon the island.

This 17th century geography is known largely from Alexander O. Exquemelin's detailed description in his book "Zeerovers," [9] where he describes a 1666 journey to the island.

Tortuga has been portrayed in many works depicting piracy in the Caribbean in the 17th and 18th centuries.

Tortuga has been featured in numerous films, including

Main article: Geography of Pirates of the Caribbean § Tortuga

Books featuring the island include:

Tortuga is mentioned in multiple songs, including:

Tortuga is featured in Sabatini’s Captain Blood series and the movies based on it (the most famous is Captain Blood (1935) starring Errol Flynn). It is the place where Blood and his crew find refuge after their escape from Barbados in 1685. Blood receives a Letter of Marque from Tortuga’s governor, D’Ogeron, and the island becomes his main base for the next four years. He starts his raids from Cayona, and several events in the books take place on Tortuga itself or on ships anchoring in the harbour of Cayona.

Sabatini used Exquemelin’s History of the Bouccaneers of America as a main source for his description of Tortuga, and therefore the island is portrayed as a place where many buccaneers, prostitutes, and other dubious professions operate, but the French West India Company, which rules Tortuga, makes profit off of those affairs.

Tortuga also features in Sabatini’s novel, The Black Swan and the 1942 movie based on it.

Tortuga has been featured in numerous video games, including: