From Infogalactic: the planetary knowledge core
Jump to: navigation, search
A lunar transit of the sun captured during calibration of the STEREO B spacecraft's ultraviolet imaging . The Moon appears much smaller than it does seen from Earth, because the spacecraft-Moon separation was several times greater than the Earth-Moon distance.

The term transit or astronomical transit has three meanings in astronomy:

The rest of this article refers to the first kind of transit.

On 3 June 2014, the Curiosity rover on the planet Mars observed the planet Mercury transiting the Sun, marking the first time a planetary transit has been observed from a celestial body besides Earth.[1]

A simulation of Io transiting Jupiter as seen from the Earth. Io's shadow is seen on the surface of Jupiter, leading Io slightly due to the sun and Earth not being in the same line.

One example of a transit involves the motion of a planet between a terrestrial observer and the Sun. This can happen only with inferior planets, namely Mercury and Venus (see transit of Mercury and transit of Venus). However, as seen from outer planets such as Mars, the Earth itself transits the Sun on occasion. 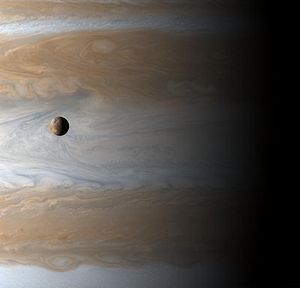 Io transits across Jupiter as seen by Cassini spacecraft 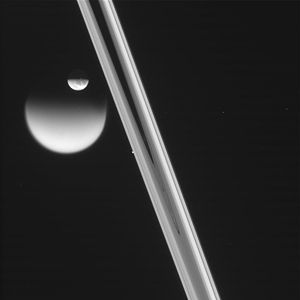 Dione transits Titan, as seen by the Cassini probe; in the background, little Prometheus is occulted by the rings of Saturn

The term can also be used to describe the motion of a satellite across its parent planet, for instance one of the Galilean satellites (Io, Europa, Ganymede, Callisto) across Jupiter, as seen from Earth.

A transit requires three bodies to be lined up in a single line. More rare are cases where four bodies are lined up. The one closest to the present occurred on 27 April 1586, when Mercury transited the Sun as seen from Venus at the same time as a transit of Mercury from Saturn and a transit of Venus from Saturn.

In recent years the discovery of extrasolar planets has excited interest in the possibility of detecting their transits across their own stellar primaries. HD 209458b is the first such transiting planet to be discovered. 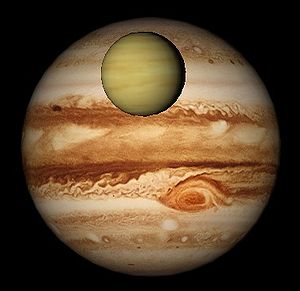 A simulation of Venus transiting Jupiter, as it did on 3 January 1818.

In rare cases, one planet can transit in front of another. The next time this will happen (as seen from Earth) will be on 22 November 2065 at about 12:43 UTC, when Venus near superior conjunction (with an angular diameter of 10.6") will transit in front of Jupiter (with an angular diameter of 30.9"); however, this will take place only 8° west of the Sun, and will therefore not be visible to the unaided/unprotected eye. When the nearer object has a larger angular diameter than the farther object, thus covering it completely, the event is not a transit but an occultation. Before transiting Jupiter, Venus will occult Jupiter's moon Ganymede at around 11:24 UTC as seen from some southernmost parts of Earth. Parallax will cause actual observed times to vary by a few minutes, depending on the precise location of the observer.

There are only 18 mutual planetary transits and occultations as seen from Earth between 1700 and 2200. Note the long break of events between 1818 and 2065.

The 1737 event was observed by John Bevis at Greenwich Observatory – it is the only detailed account of a mutual planetary occultation. A transit of Mars across Jupiter on 12 Sep 1170 was observed by the monk Gervase at Canterbury, and by Chinese astronomers. In addition, an occultation of Mars by Venus was observed by Michael Maestlin at Heidelberg on 3 October 1590.

Future transits that can be seen from planets other than Earth include:

During a transit there are four "contacts", when the circumference of the small circle (small body disk) touches the circumference of the large circle (large body disk) at a single point. Historically, measuring the precise time of each point of contact was one of the most accurate ways to determine the positions of astronomical bodies. The contacts happen in the following order:

Artistic animation of a planet transitting its star.

A fifth named point is that of greatest transit, when the apparent centers of the two bodies are nearest to each other, halfway through the transit.[2]

For transit of planets in front of others, see also occultation.