Transportation in Cuba is composed of a system of railways, roads, airports, waterways, ports and harbours:

Cuba built the first railway system in the Spanish empire, before the 1848 start in the Iberian peninsula. While the rail infrastructure dates from colonial and early republican times, passenger service along the principal Havana to Santiago corridor is increasingly reliable[citation needed] and popular with tourists[citation needed] who can purchase tickets in Cuban convertible pesos. As with most public transport in Cuba, the vehicles used are second hand, and the flagship Tren Francés ("French train") between Havana and Santiago de Cuba is operated by coaches originally used in Europe between Paris and Amsterdam on the ex-TEE express. The train is formed by 12 coaches and a Chinese-built locomotive.

With the order of 12 new Chinese locomotives, built specially for Cuban Railways at China Northern Locomotives and Rolling Stock Works, services have been improving in reliability.[citation needed] Those benefiting the most are long distance freight services with the French train Havana-Santiago being the only passenger train using one of the new Chinese locomotives regularly. Various orders are in place for 100 locomotives from China and various freight wagons and passenger coaches.

Metro systems are not present in the island, although a suburban rail network exists in Havana.[1] Urban tramways worked until the half of 20th century in the cities of Havana, Matanzas, Cárdenas, Cienfuegos, Camagüey and Santiago de Cuba.[2]

Via Blanca highway near Matanzas

The total length of Cuba's highways is 60,858 km, including

Older roads include the Carretera Central, and the Via Blanca from Havana to Matanzas.

Long-distance and inter-municipality buses in Cuba 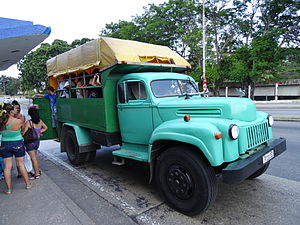 There are two national bus companies in Cuba. Viazul operate a fleet of modern and comfortable coaches on longer distance routes designed principally for tourists. Schedules, prices and ticket booking can be done on line, at any of the major international airports or National Terminals across Cuba.

AstroBus, a bus service in Cuban National Pesos, designed to bring comfortable air conditioned coaches to Cuban locals at an affordable price. The AstroBus lines operate with modern Chinese YUTONG buses, and are accessible to Cuban Residents of Cuba with their ID Card, and is payable in Cuba Pesos. Routes that have benefited most so far are those from Havana to each of the 13 provincial capitals of the country. 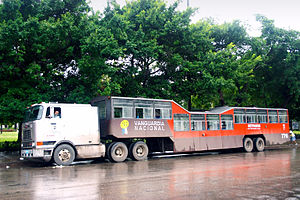 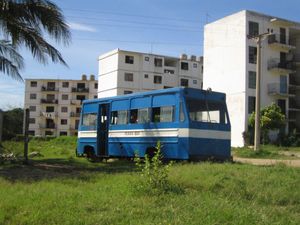 Ferro Bus in Levisa near Mayarí in Holguín Province 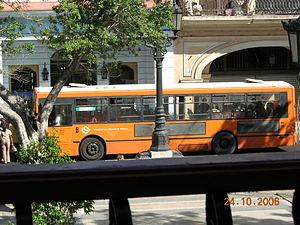 A decommissioned bus from Seville, now operating in Havana

In Havana urban transportation is provided by a colourful selection of buses imported from the Soviet Union or Canada. Many of these vehicles are second hand (such as the 1500 decommissioned Dutch buses, which the Netherlands donated to Cuba in the mid-1990s) and despite the United States trade embargo, American-style yellow school buses (imported second-hand from Canada) are increasingly common sights. On seven key lines in and out of the city, service is provided by Chinese Zhengzhou Yutong Buses. They replaced from 2008 the famous camellos ("camels" or "dromedaries", after their "humps"), trailer buses that hauled as many as two hundred passengers in a passenger carrying trailer.

After the upgrading of Seville's public bus fleet to CNG-powered and new vehicles, many of the decommissioned ones were donated to the city of Havana. These bright orange buses still display the name of Transportes Urbanos de Sevilla, S.A.M., their former owner, and Seville's coat of arms as a sign of gratitude.[4]

On 18 July 2007 it was reported that Cuba will receive 100 urban buses from Belarus before years end, destined for use in Havana.[5] 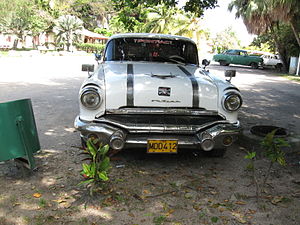 Since 2009, Cuba has imported sedans from Chinese automaker Geely to serve as police cars, taxis and rental vehicles.[7] Previously, the Soviet Union supplied Volgas, Moskvichs, and Ladas, as well as heavy trucks like the ZIL and the KrAZ.[8] It is estimated that there are some 173,000 cars in Cuba.[9]

Until the 1960 embargo, most new vehicles came to Cuba from the United States until the 1960 United States embargo against Cuba ended both importation of cars and their parts. As many as 60,000 American vehicles are in use,[10] nearly all in private hands. Of Cuba's vintage American cars, many have been modified with newer engines, disc brakes and other parts, often scavenged from Soviet cars, and most bear the marks of decades of use.[11] Pre-1960 vehicles remain the property of their original owners and descendants, and can be sold to other Cubans providing the proper traspaso certificate is in place. Such transactions can be difficult, but in 2010, reforms were expected to legalize the sale between Cuban citizens of all cars.[12]

However, the old American cars on the road today have "relatively high inefficiencies" due in large part to the lack of modern technology.[13] This has resulted in increased fuel consumption as well as adding to the economic plight of its owners. With these inefficiencies, noticeable drop in travel has occurred from an "average of nearly 3000 km/year in the mid-1980s to less than 800 km/year in 2000–2001".[14] As the Cuban people try to save as much money as possible, when traveling is done, the cars are usually loaded past the maximum allowable weight and travel on the decaying roads, resulting in even more abuse to the already under maintained vehicles.[15]

The extreme lack or scarcity of parts is directly a result of the Revolution and the embargo. However, there have been talks about easing some of the restriction of the embargo. Former President Clinton has pushed for U.S. citizens to be allowed to send up to $300 a month to Cuba and for “direct mail service between Cuba and the United States, suspended in 1963, to be reestablished.”[16] This would allow for families in the U.S. to send the needed parts (assuming they can be located) to their own families in Cuba, for the necessary repairs. 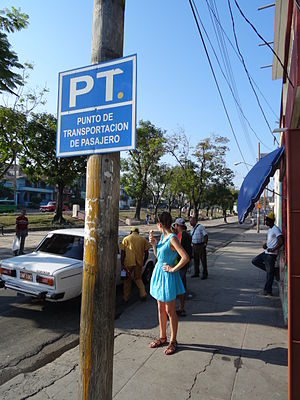 Official hitchhiking and carpooling point, Santiago de Cuba. The man in the yellow uniform stops a state-owned car to take passengers for a small fee

Since the start of the "Special Period" in 1991 (energy shortages caused by the loss of the Soviet Union as a trading partner), hitchhiking and carpooling have become important parts of Cuba's transportation system and society in general. In 1999, an article in Time magazine claimed "In Cuba[...] hitchhiking is custom. Hitchhiking is essential. Hitchhiking is what makes Cuba move."[17]

Besides the state owned airline Cubana (Cubana de Aviación), the two other major Cuban airlines are Aero Caribbean and Aerogaviota, both of whom operate modern European and Russian aircraft. One other airline is Aerotaxi.