MTA Bridges and Tunnels, legally known as the Triborough Bridge and Tunnel Authority, is an affiliate agency of the Metropolitan Transportation Authority, that operates seven intrastate toll bridges and two tunnels in New York City. In terms of traffic volume, it is the largest bridge and tunnel toll agency in the United States serving more than a million people each day and generating more than $1.5 Billion Dollars in toll revenue annually as of 2012.[2]

The seven bridges are:

The two tunnels are:

Originally named the Triborough Bridge Authority, the authority was created in 1933 as a public-benefit corporation by the New York State Legislature. It was tasked with completing construction of the Triborough Bridge, which had been started by New York City in 1929 but had stalled due to the Great Depression.

Under the chairmanship of Robert Moses, the agency grew in a series of mergers with four other agencies:

With the last merger in 1946, the authority was renamed the Triborough Bridge and Tunnel Authority. Generating millions of dollars in toll revenue annually, the TBTA easily became a powerful city agency as it was capable of funding large capital projects. From the 1940s-60s, the TBTA built the Battery Parking Garage, Jacob Riis Beach Parking Field, Coliseum Office Building and Exposition Center and East Side Airlines Terminal,[3] as well as many parks in the city. 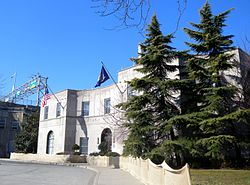 The TBTA was merged into the Metropolitan Transportation Authority in 1968. Surplus revenue, formerly used for new automobile projects, would now be used to support public transportation. [4] Since then, more than $10 billion has been contributed by the TBTA to subsidize mass transit fares and capital improvements for the New York City Transit, Long Island Rail Road, and Metro-North Railroad. Since 1994, the TBTA has been doing business as MTA Bridges and Tunnels.[5] The name Triborough Bridge and Tunnel Authority is still the legal name of the Authority and was used publicly between 1946 and 1994.

The Triborough Bridge and Tunnel Authority (TBTA) employs 966 Bridge and Tunnel Officers (BTOs), who are NYS Peace Officers authorized to make arrests and carry firearms on and off duty. BTOs patrol the authority's 9 facilities on foot and in marked patrol cars. Besides law enforcement, the BTOs collect tolls, assist vehicles stuck in E-ZPass lanes, operate tow trucks to clear disabled vehicles, and clear snow from the roadways. The TBTA also has a Special Operations Division/Collision Reduction Unit, which enforces all aspects of the New York State Vehicle and Traffic Law and NYC Traffic Rules with a main emphasis on speed enforcement.

In 2007, Bridge and Tunnel Officers were involved in two shootings, on the Triborough and Bronx Whitestone Bridges. They also assisted in the delivery of a newborn baby.[citation needed]

E-ZPass rates are for tags issued by the New York Customer Service Center only. Tolls are charged in both directions unless otherwise noted. All rates are effective on March 22, 2015.[6]

Part 1022 of the Rules and Regulations Governing the Use of the Triborough Bridge and Tunnel Authority Facilities prohibits certain types of vehicles, such as:[7]