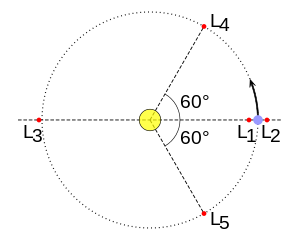 The trojan points are those labelled L4 and L5, highlighted in red, on the orbital path of the secondary object (blue), around the primary object (yellow).

In astronomy, a trojan is a minor planet or moon that shares the orbit of a planet or larger moon, wherein the trojan remains in the same, stable position relative to the larger object. In particular, a trojan remains near one of the two trojan points of stability – designated L4 and L5 – which lie approximately 60° ahead of and behind the larger body, respectively. Trojan points are two of five types of Lagrangian points, and a trojan is a type of Lagrangian object.

They are one type of co-orbital object. In this arrangement, the massive star and the smaller planet orbit about their common barycenter. A much smaller mass located at one of the Lagrangian points is subject to a combined gravitational force that acts through this barycenter. Hence the object can orbit around the barycenter with the same orbital period as the planet, and the arrangement can remain stable over time.[1]

The Jupiter trojans account for most known trojans in the Solar System. They are divided into the Greek camp (L4) in front of and the Trojan camp (L5) trailing behind Jupiter in their orbit. More than 6,000 have been found so far and more than a million Jupiter trojans larger than one kilometer are thought to exist, whereas only a few Mars trojans (7) and Neptune trojans (13) have been found to date. Numerical calculations of the orbital dynamics involved indicate that Saturn and Uranus probably do not have any primordial trojans.[2] The discovery of the first Earth trojan, 2010 TK7, was announced by NASA in 2011.[3]

Unlike trojan minor planets that share the orbit with a planet, a trojan moon is a moon orbiting near the trojan point of another, larger moon. All known trojan moons are part of the Saturn system. Telesto and Calypso are trojans of Tethys, and Helene and Polydeuces of Dione. There is also a theoretical concept of a trojan planet, a planet that orbits at the trojan point of another, larger planet. Such a pair of co-orbital exoplanets was already thought to exist in another star system, but this claim was later retracted.[4] 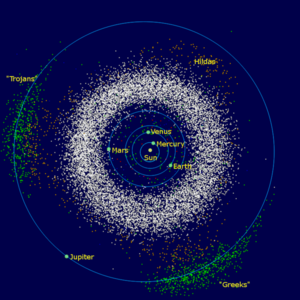 The Jupiter trojans in front of and behind the planet along its orbital path, the asteroid belt between Mars and Jupiter, and the Hilda asteroids.

In 1772, the Italian–French mathematician and astronomer Joseph-Louis Lagrange obtained two constant-pattern solutions (collinear and equilateral) of the general three-body problem.[5] In the restricted three-body problem, with one mass negligible (which Lagrange did not consider), the five possible positions of that mass are now termed Lagrangian points.

The term "trojan" originally referred to the "trojan asteroids" (Jupiter trojans) that orbit close to the Lagrangian points of Jupiter. These have long been named after characters from the Trojan War of Greek mythology. By convention, the asteroids orbiting near the L4 point of Jupiter are named after the characters from the Greek side of the war, whereas those orbiting near the L5 of Jupiter are from the Trojan side. There are two exceptions, which were named before the convention was put in place, the Greek-themed 617 Patroclus and the Trojan-themed 624 Hektor, which were assigned to the wrong sides.[6]

Astronomers estimate that the Jupiter trojans are about as numerous as the asteroids of the asteroid belt.[7]

Whether or not a system of star, planet, and trojan is stable depends on how large the perturbations are to which it is subject. If, for example, the planet is the mass of Earth, and there is also a Jupiter-mass object orbiting that star, the trojan's orbit would be much less stable than if the second planet had the mass of Pluto.