Tromelin Island (/ˌtroʊmlɪn ˈaɪlənd/; French: Île Tromelin, pronounced: [il tʁɔmlɛ̃]) is a low, flat, uninhabited island in the Indian Ocean, about 450 kilometres (280 mi) east of Madagascar. The island is administered as a French overseas territory. Mauritius claims sovereignty over Tromelin Island; France and Mauritius reached an agreement for the co-management of the island without prejudice to the respective positions of the two governments on the issue of sovereignty.[1] Tromelin has a weather station and is a nesting site for boobies and green sea turtles. 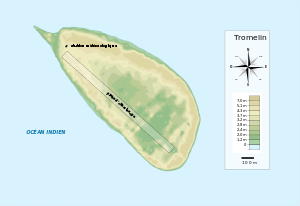 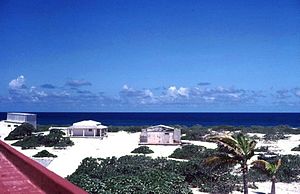 The island has been identified as an Important Bird Area (IBA) by BirdLife International because of its significance as a seabird breeding site. Both masked (with up to 250 pairs) and red-footed boobies (up to 180 pairs) nesting there. Sulidae populations have seriously declined in the western Indian Ocean with those on Tromelin among the healthiest remaining. The island’s masked boobies are of the western Indian Ocean subspecies (Sula dactylatra melanops), of which Tromelin is a stronghold. The red-footed boobies constitute the only polymorphic population in the region, indicating its biogeographical isolation. Both great and lesser frigatebirds used to nest on the island but have subsequently become extinct as breeders, though they continue to use the island for roosting. There are no resident landbirds.[2] 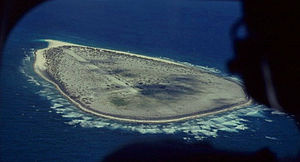 The island was discovered by France in 1722. It was recorded by the French navigator Jean Marie Briand de la Feuillée and named "Île des Sables".[3]

In 1761 the French ship Utile, carrying slaves from Madagascar to Mauritius, ran onto the reefs of the island. Using the wood of the shipwreck a raft was built in which the French officers with their crew left Tromelin abandoning the slaves — 60 Malagasy men and women — on the desert island and promising to return and rescue them. When the crew of the ship reached Madagascar they requested the colonial authorities to send a ship to rescue the people on the island. However, they met with a categorical refusal based on the fact that France was fighting the Seven Years' War and no ship could be spared. Meanwhile, the people who had been left on the bleak little island built a shed with coral stones, for most wood had been used in the construction of the raft for the crew. They also built a lookout on the highest point of the island in order not to miss the ship that would come to their rescue. They were all from the Central Highlands and were not used to the marine environment. Most died within the first few months.[3]

Fifteen years later in 1776, Bernard Boudin de Tromelin (from whom the island takes its name), captain of the French warship La Dauphine, visited the island and rescued the survivors — seven women and an eight-month-old child.[4]

The French claim to sovereignty dates from 29 November 1776,[5] but Mauritius claims Tromelin, arguing that the island hasn't been ceded to France by the treaty of Paris in 1814. The United Nations never recognized the Mauritian sovereignty over Tromelin. In 1954, France constructed a meteorological station and a landing strip on the island.[6] It is a matter of dispute whether the agreement transferred sovereignty of Tromelin from one to the other, and Mauritius claims the island as part of its territory on the grounds that sovereignty was not transferred to France in 1814 and the island was thus part of the colony of Mauritius at the time of independence.[7] Indeed, as early as 1959, even before independence, Mauritius informed the World Meteorological Organization that it considered Tromelin to be part of its territory.[8] France and Mauritius reached a co-management treaty in 2010.[9]

Tromelin has an Exclusive Economic Zone (EEZ) of 280,000 square kilometres (110,000 sq mi), contiguous with that of Réunion. The island's weather station, which warns of cyclones, is still operated by France and is staffed by meteorologists from Réunion.

The first amateur radio operation from Tromelin Island took place in 1954, by Marc FB8BK/T. A major operation took place in 2000 by a four-man team who made 50,000 contacts with the callsign FR/F6KDF/T. Authorization was not given again until 2014, so by August 2014, Clublog listed Tromelin Island as the eighth most-wanted DXCC entity.[10] A DX-pedition consisting of seven French radio amateurs arrived and operated from Tromelin Island from October 30 to November 10, 2014 using call sign FT4TA.,[11] making 71,465 contacts.