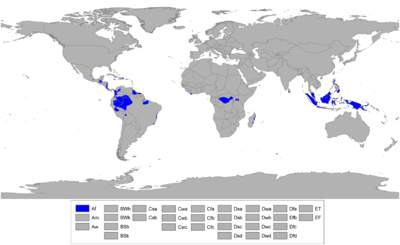 Tropical rainforests have a type of tropical climate in which there is no dry season – all months have an average precipitation value of at least 60 mm. Tropical rainforests have no summer or winter; it is typically hot and wet throughout the year and rainfall is both heavy and frequent. One day in an equatorial climate can be very similar to the next, while the change in temperature between day and night may be larger than the average change in temperature along the year.[1]

A tropical rainforest is usually found at latitudes within ten degrees North and South of the equator, which are dominated by the Intertropical Convergence Zone. The climate is most commonly found in Southeast Asia, Central Africa and South America. However, tropical microclimates are found in many other regions (e.g. far North Queensland), while not everywhere along the equatorial region features a tropical rainforest climate.

Some of the places that have this rainforests are indeed uniformly and monotonously wet throughout the year (e.g., the northwest Pacific coast of South and Central America, from Ecuador to Costa Rica, see for instance, Andagoya, Colombia), but in many cases the period of higher sun and longer days is distinctly driest (as at Palembang, Indonesia) or the time of lower sun and shorter days may have more rain (as at Sitiawan, Malaysia).

Additionally, while tropical rainforest are typically located near the equator (hence the alternate name “equatorial climate”), there are a number of instances where the climate is found some distance away from the equator. For instance, Santos, Brazil and Fort Lauderdale, USA are not only far removed from the equator, but are actually located just outside the tropics. Yet both of these cities feature a tropical rainforest climate, albeit with noticeably cooler and warmer periods of the year.