From Infogalactic: the planetary knowledge core
(Redirected from Troy (crater))
Jump to: navigation, search
This article should list only official names approved by the International Astronomical Union (IAU).[1] 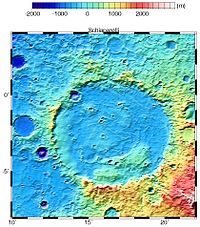 Elevation map of the Martian crater Schiaparelli, as seen by Mars Global Surveyor

This is a list of craters on Mars. There are hundreds of thousands of impact crater on Mars, but only some of them have names. This list here contains only named Martian craters starting with the letter O – Z (see also lists for A – G and H – N).

Large Martian craters (greater than 60 km in diameter) are named after famous scientists and science fiction authors; smaller ones (less than 60 km in diameter) get their names from towns on Earth. Craters cannot be named for living people, and small crater names are not intended to be commemorative - that is, a small crater isn't actually named after a specific town on Earth, but rather its name comes at random from a pool of terrestrial place names, with some exceptions made for craters near landing sites.[2] Latitude and longitude are given as planetographic coordinates with west longitude.